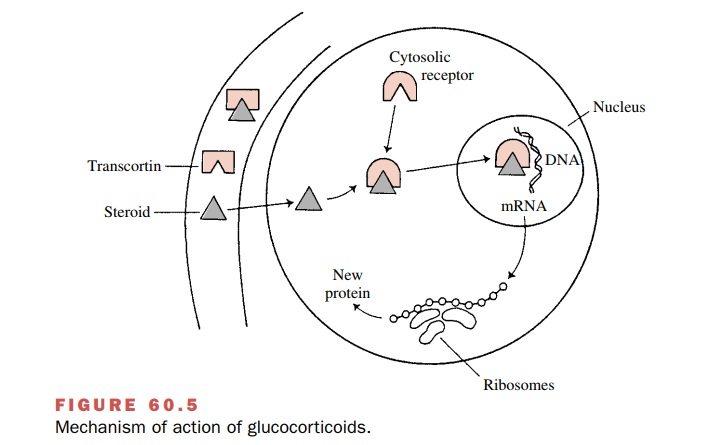 While certain properties of glucocorticoid action are a result of direct posttranscriptional effects, most are a consequence of effects on gene expression.

While certain properties of glucocorticoid action are a result of direct posttranscriptional effects, most are a consequence of effects on gene expression. Steroids transported by transcortin enter the target cell by diffu-sion and then form a complex with its cytosolic receptor protein. Glucocorticoids bind to cytoplasmic glucocorti-coid receptors containing two subunits of the heat shock protein that belong to the 90-kDa family. The heat shock protein dissociates, allowing rapid nuclear translocation of the receptor–steroid complex. Within the nucleus, the glucocorticoid receptor induces gene transcription by binding to specific sequences on DNA called glucocorticoid response elements in the pro-moter–enhancer regions of responsive genes (Fig. 60.5). In certain cases, the glucocorticoid receptor can interact with nuclear factor- B and AP-1 to inhibit gene expres-sion activated by these proinflammatory transcription factors. Because their side effects are thought to be a consequence of gene induction, glucocorticoids that can repress inflammatory genes without inducing gene tran-scription are in development. 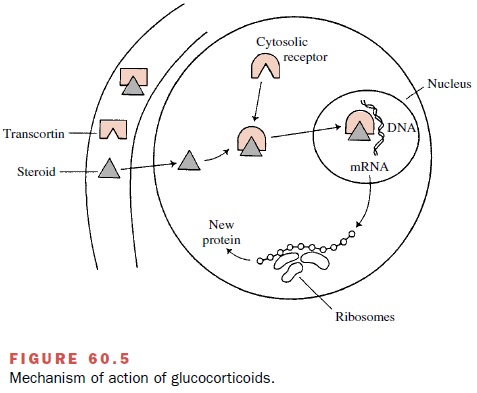 However, in other tissues gluco-corticoids may exert their actions through mineralocor-ticoid receptors. Several actions of glucocorticoids that are too rapid to be explained by actions on transcription are mediated by effects on membrane receptors.

Because glucocorticoids regulate gene expression and protein synthesis, there is generally a lag of several hours before their effects are manifest. Moreover, the duration of various responses can endure after steroid levels fall. This may account for the fact that side effects elicited by steroids can be minimized by alternate-day therapy.

Metabolites of arachidonic acid, including prosta-glandins (PG), thromboxanes, and leukotrienes, are considered strong candidates as mediators of the in-flammatory process. Steroids may exert a primary effect at the inflammatory site by inducing the synthesis of a group of proteins called lipocortins. These proteins sup-press the activation of phospholipase A2, thereby de-creasing the release of arachidonic acid and the produc-tion of proinflammatory eicosanoids (Fig. 60.6). 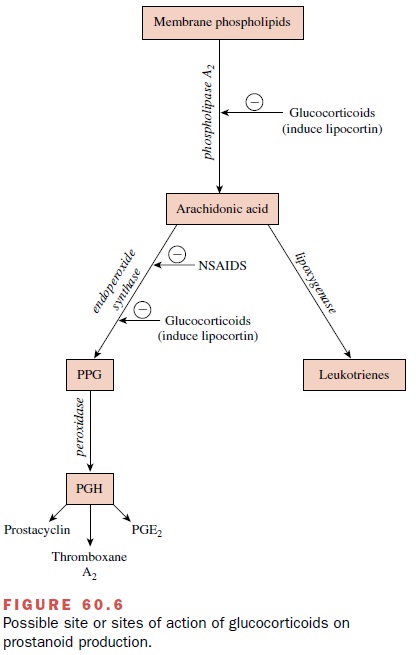 Another possible glucocorticoid-sensitive step is the PG endoperoxide H synthase (or cyclooxygenase) (COX) mediated conversion of arachidonate to PG en-doperoxides (Fig. 60-6). The endoperoxides (PGG and PGH) are the precursors of PGE2, thromboxane A2 (TBXA2), and PGI2, (prostacyclin). PG endoperoxide H synthase has two isoforms: one is constitutively ex-pressed (PGHS-1, or COX-1), and another is induced by growth factors, cytokines, and endotoxins (PGHS-2, or COX-2). One component of the antiinflammatory ac-tion of glucocorticoids appears to involve the suppres-sion of PGHS-2 induction in inflammatory cells by proinflammatory stimuli. Inhibition of the production and effects of inflammatory cytokines (IL-6 and IL- ) by the transcription factors nuclear factor- B and AP-1 may also contribute to the antiinflammatory effects of glucocorticoids.