Within the basic structure of the steroid molecule (Fig. 60.4), a 4,5 double bond and a 3-ketone group are needed for typical steroid activity. A hydroxyl group on C11 is needed for glucocorticoid activity (cortico-sterone) but is not required for sodium-retaining activ-ity (desoxycorticosterone). The addition of a hydroxyl group on C17, which converts corticosterone to cortisol, also increases glucocorticoid activity. 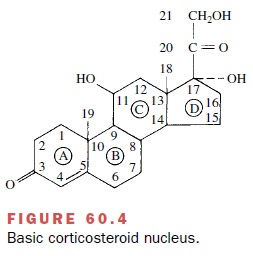 The ultimate aim in altering the steroid molecule is to decrease sodium-retaining activity and to increase anti-inflammatory glucocorticoid activity.

The addition of a double bond at the 1,2 position of cortisol or cortisone yields prednisone or prednisolone, respectively, and increases the ratio of carbohydrate to sodium-retaining potency. Prednisone is inactive and must be converted to prednisolone in the liver by re-duction at the 11-keto position.

The inclusion of an -methyl group in position 6 of prednisolone will yield 6- -methylprednisolone, a com-pound with slightly greater glucocorticoid potency. This small structural modification greatly diminishes the binding of methylprednisolone to transcortin.

The addition of a fluoride group on the 9 position of cortisol to give 9- α -fluorocortisol will greatly increase all biological activity.

Hydroxylation or methylation at the 16 position of α-fluoroprednisolone to give triamcinolone, dexam-ethasone, or betamethasone increases antiinflammatory potency and drastically diminishes sodium-retaining activity.

The relative antiinflammatory potency of each of the synthetic analogues is compared with cortisol in Table 60.1 and is roughly correlated with its biological half-life. Hydrocortisone is considered a short-acting steroid; triamcinolone and prednisolone, intermediate-acting; and betamethasone and dexamethasone, long-acting. Thus, prednisone 5 mg, dexamethasone 0.75 mg, and hydrocortisone 20 mg should possess equal gluco-corticoid potency.

The synthetic analogues (except 9- α -fluorocortisol) share an advantage over hydrocortisone in that sodium retention is not as marked at equipotent antiinflamma-tory doses. However, all of the other undesirable side effects of supraphysiological concentrations of hydro-cortisone have been observed with the synthetic ana-logues.

Glucocorticoids are available in a wide range of prepa-rations, so that they can be administered parenterally, orally, topically, or by inhalation. Obviously the oral route is preferred for prolonged therapy. However, par-enteral administration is required in certain circum-stances. Intramuscular injection of a water-soluble ester (phosphate or succinate) formed by esterification of the C21 steroid alcohol produces peak plasma steroid levels within 1 hour. Such preparations are useful in emergen-cies. By contrast, acetate and tertiary butylacetate esters must be injected locally as suspensions and are slowly absorbed from the injection site, which prolongs their effectiveness to approximately 8 hours.

Topical preparations usually contain relatively insol-uble steroids, such as clobetasol propionate, triamcin-olone acetonide, or triamcinolone diacetate. Side effects of this mode of drug application are usually milder and more transient than those seen after systemically ad-ministered steroids. However, potent topical cortico-steroids, such as clobetasol propionate (Temovate), can suppress adrenal function when used in large amounts for a long time, especially when the skin surface is de-nuded or when occlusive dressings are employed. Since the high potency topical preparations carry a higher risk of local side effects, their use should be held in reserve.

Inhaled glucocorticoid preparations, such as be-clomethasone dipropionate and betamethasone valer-ate, provide an effective alternative to systemic steroids in the treatment of chronic asthma, with lesser side ef-fects than oral or parenteral glucocorticoids . In fact, inhaled glucocorticoids have be-come a mainstay of asthma therapy. Inhalation delivers the agent directly to the target site in relatively low doses, with the potential for more frequent administra-tion. Moreover, inhaled glucocorticoids are metabolized in the lung before they are absorbed, which reduces their systemic effects.

However, even modest doses of inhaled steroid can have a measurable effect on the hypothalamic–pituitary axis, although the clinical ef-fects may be marginal. There is also a close association in adults between the heavy use of inhaled glucocorti-coids and the risk of posterior subcapsular cataract. Since the dose–response curve to inhaled glucocorti-coids is relatively flat, the use of steroid-sparing agents (long-acting inhaled β-adrenergic agonists, low-dose theophylline, or antileukotrienes) is recommended in-stead of increasing the dose of glucocorticoid. This strategy will also limit the severity of hypothalamic–pi-tuitary–adrenal depression and other side effects.