Sterilisation by heat - Control of Microorganisms 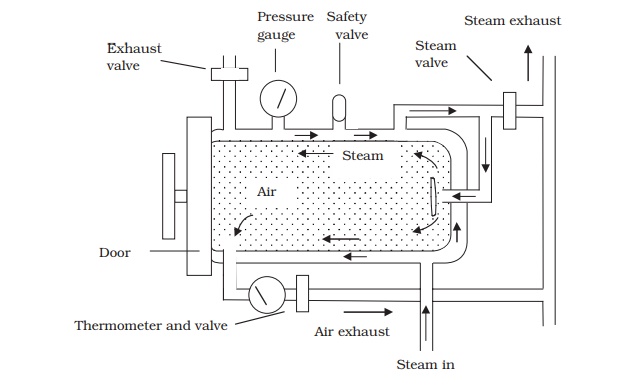 Boiling at 100 ◦ C for 10 minutes is usually enough to achieve sterility, provided that organisms are not present in high concentrations;

Boiling at 100 ◦ C for 10 minutes is usually enough to achieve sterility, provided that organisms are not present in high concentrations; in fact most bacteria are killed at about 70 ◦ C. If, however, endospores of certain bacteria (notably Bacillus and Clostridium) 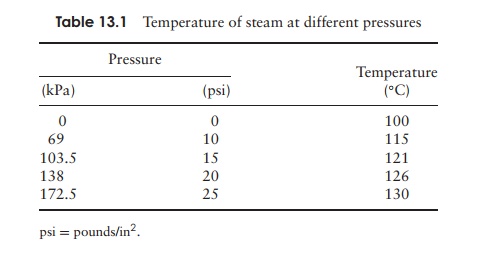 are present, they can resist boiling, sometimes for several hours. As we saw, the causative agents of some particularly nasty conditions, such as botulism and tetanus, are members of this group. In order to destroy the heat resistant endospores, heating beyond 100 ◦ C is required, and this can be achieved by heating under pressure in a closed vessel (Table 13.1). A typical laboratory treatment is 15 minutes at a pressure of 103 kpa (15 psi), raising the temperature of steam to 121 ◦ C. This is carried out in an autoclave, which is, to all intents and purposes, a large-scale pressure cooker (Figure 13.1). Air is driven out of the system so that the atmosphere is made up entirely of steam; the desired temperature will not be reached if this is not achieved (Figure 13.2). Large loads, or large volumes of liquids, may need a longer treatment time in order for 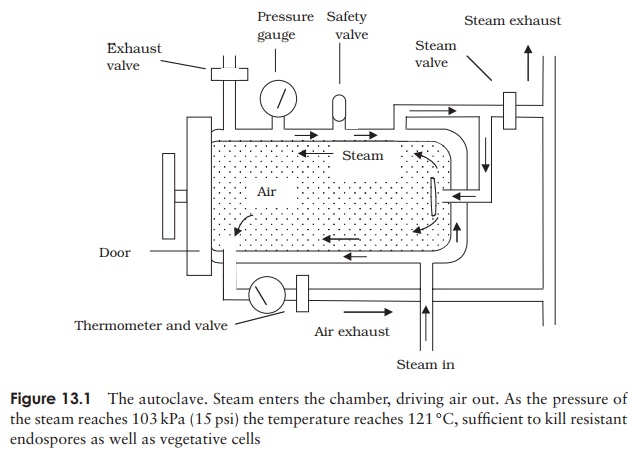 the heat to penetrate throughout. Modern autoclaves include probes designed to assess the temperature within a load rather than that of the atmosphere. Sometimes, spores of Bacillus stearothermophilus are introduced into a system along with the material to be sterilised; if subsequent testing shows that the spores have all been destroyed, it is reasonable to assume that the system has also destroyed any other biological entity present. Special tape which changes colour if the necessary temperature is reached can act as a more convenient but less reliable indicator. 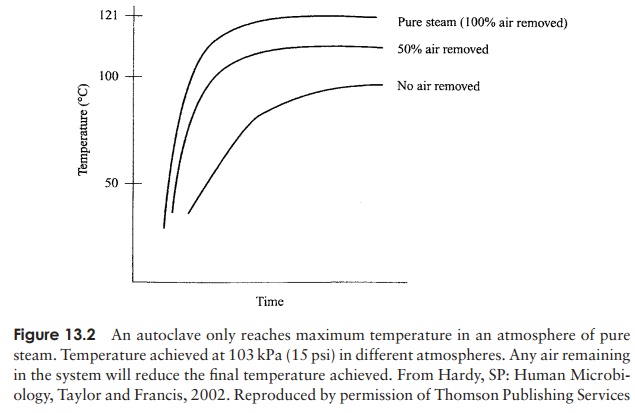 An effect similar to that achieved by autoclaving can be obtained by a method called intermittent steaming or tyndallisation (after the Irish physicist John Tyndall, who was one of the first to demonstrate the existence of heat-resistant microbial forms). This is used for those substances or materials that might be damaged by the high tempera-tures used in autoclaving. The material is heated to between 90 and 100 ◦ C for about 30 minutes on each of three successive days, and left at 37 ◦ C in the intervening periods. Vegetative cells are killed off during the heating period, and during the 37 ◦ C incubation, any endospores that have survived will germinate. Once these have grown into more vegetative cells, they too are killed in the next round of steam treatment. Clearly this is quite a long-winded procedure, and it is therefore reserved for those materials which might be harmed by steam sterilisation.

High temperatures can cause damage to the taste, texture and nutritional value of many food substances and in such instances, it is sufficient to destroy vegetative cells by a process of pasteurisation (among his many other achievements, Pasteur demonstrated that the microbial spoilage of wines could be prevented by short periods of heating). Milk was traditionally pasteurised by heating large volumes at 63 ◦ C for 30 minutes, but the method employed nowadays is to pass it over a heat exchanger at 72 ◦ C for 15 seconds (HTST – high temperature, short time). This is not sterilisation as such, but it ensures the destruction of disease-causing organisms such as Brucella abortus and Mycobacterium tuberculosis, which at one time were frequently found in milk, as wellas significantly reducing the organisms that cause food spoilage, thus prolonging the time the milk can be kept. Some protocols exceed these minimum values in order to reduce further the microbial content of the milk. One type of milk on sale in the shops is subjected to more extreme heating regimes; this is ‘UHT’ milk, which can be kept for several weeks without refrigeration, though many find that this is achieved at some cost to its palatability! It is heated to ultra high temperatures (150 ◦ C) for a couple of seconds using superheated steam. The product is often referred to as being ‘sterilised’, but this is not true in the strictest sense. Milk is not the only foodstuff to be pasteurised; others such as beer, fruit juices and ice cream each has its own time/temperature combination.

All the above methods employ a combination of heat and moisture to achieve their effect; the denaturation of proteins, upon which these methods depend, is enhanced in the presence of water. Heat is more readily transferred through water than through air, and the main reason that endospores are so resistant is because of their very low water content. In some situations however, it is possible to employ dry heat, using an oven to sterilise metal instruments or glassware for example. It is a more convenient procedure, but a higher temperature (160–170 ◦ C) and longer exposure time (2 hours) are required. Dry heat works by oxidising (‘burning’) the cell’s components. Microorganisms are quite literally burnt to destruction by the most extreme form of dry heat treatment, incineration. Soiled medical dressings and swabs, for example are potentially hazardous, and are destroyed in this way at many hundreds of degrees Celsius. As we saw, sterilising the loops and needles used to manipulate microorganisms by means of flaming is a routine part of aseptic procedures.