Disinfection, by comparison, allows the possibility that some organisms may survive, with the potential to resume growth when conditions become more favourable.

Disinfection, by comparison, allows the possibility that some organisms may survive, with the potential to resume growth when conditions become more favourable.

A disinfectant is a chemical agent used to disinfect inanimate objects such as work surfaces and floors. In the food and catering industry, especially in the USA, the termsanitisation is used to describe a combination of cleaning and dis-infection. Disinfectants are incapable of killing spores within a reasonable time period, and are generally effec-tive against a narrower range of organisms than physical means. Decontamination is a term sometimes used interchangeably with disinfection, but its scope is wider, encompassing the removal or inactivation of microbial products such as toxins as well as the organisms themselves.

The lethal action of disinfectants is mainly due to their ability to react with microbial proteins, and therefore enzymes. Consequently, any chemical agent that can coagu-late, or in any other way denature, proteins will act as a disinfectant, and compounds belonging to a number of groups are able to do this.

The antimicrobial properties of ethanol have been known for over a century. It was soon realised that it worked more effectively as a disinfectant at less than 100 per cent concentration, that is, when there was some water present. This is because denaturation of proteins proceeds much more effectively in the presence of water. (Recall that moist heat is more effective than dry heat for the same reason.) It is important, however, not to overdo the dilution, as at low percentages some organisms can actually utilise ethanol as a nutrient! Ethanol and isopropanol are most commonly used at a concentration of 70 per cent. As well as denaturing proteins, alcohols may act by dissolving lipids, and thus have a disruptive effect on membranes, and on the envelope of certain viruses. Both bacteria and fungi are killed by alcohol treatment, but spores are often resistant because of problems in rehydrating them; there are records of anthrax spores surviving in ethanol for 20 years! The use of alcohols is further limited to those materials that can withstand their solvent action.

Alcohols may also serve as solvents for certain other chemical disinfectants. The effectiveness of iodine for example, can be enhanced by being dissolved in ethanol.

Chlorine is an effective disinfectant as a free gas, and as a component of chlorine-releasing compounds such as hypochlorite and chloramines. Chlorine gas, in compressed form, is used in the disinfection of municipal water supplies, swimming pools and the dairy industry. Sodium hypochlorite (household bleach) oxidises sulphydryl (−SH) and disulphide (S−S) bonds in proteins. Like chlorine, hypochlorite is inactivated by the presence of organic material. Chloramines are more stable than hypochlorite or free chlorine, and are less affected by organic matter. They are also less toxic and have the additional benefit of releasing their chlorine slowly over a period of time, giving them a prolonged bactericidal effect.

Iodine acts by combining with the tyrosine residues on proteins; its effect is enhanced by being dissolved in ethanol (1 per cent I2 in 70 per cent ethanol) as tincture of iodine, an effective skin disinfectant. Its use is being superseded by iodophores (Betadine, Isodine), in which iodine is combined with an organic molecule, usually a detergent, to combat bacteria, viruses and fungi, but not spores.

As we saw, the germicidal properties of phenol (carbolic acid) were first demonstrated by Lister in the middle of the 19th century. Since it is highly toxic, phenol’s use in the disinfection of wounds has long since been discontinued, but derivatives such as cresols and xylenols continue to be used as disinfectants and antiseptics. These are both less toxic to humans and more effective against bacteria than the parent compound. Phenol is still used, however, as a benchmark against which the effectiveness of related disinfectants can be measured. The phenol coefficient compares the dilution at which the derivative is effective against a test organism with the dilution at which phenol achieves the same result. A phenol coefficient of more than one means that the new compound is more effective than phenol against the organism tested, whereas a value of less than one means that it is not as effective as phenol.

Phenolics act by combining with and denaturing proteins, as well as disrupting cell membranes. Their advantages include the retention of activity in the presence of or-ganic substances and detergents, and their ability to remain active for some time after application; hence their effect increases with repeated use. Familiar disinfectants such as Dettol, Lysol and chlorhexidine (Hibitane, Hibiscrub) are all phenol derivatives. Hexachlorophene (Figure 13.5) is very effective against Gram-positive bacteria such as staphylococci and streptococci, and used to be a component of certain soaps, surgical scrubs, shampoos and deodorants. Its use is now confined to specialist applications in hospitals since the finding that in some cases, prolonged application can lead to brain damage. 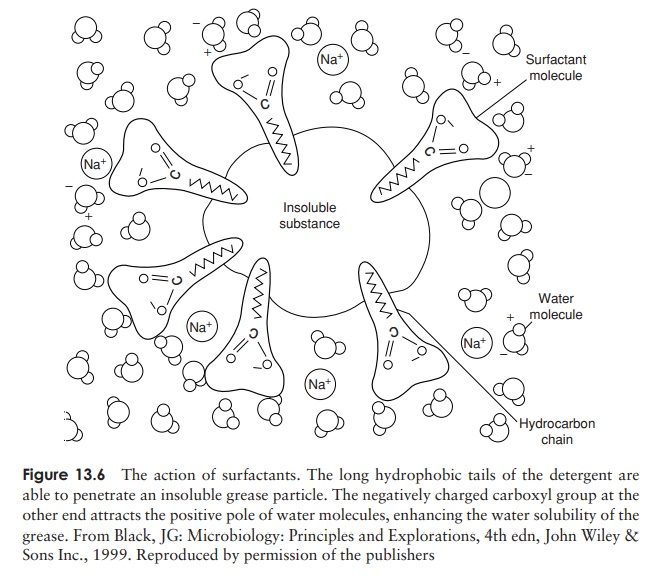 Surface active agents or surfactants, such as soaps and detergents, have the abil-ity to orientate themselves between two interfaces to bring them into closer contact

be rinsed away. Detergents may be anionic (neg-atively charged), cationic (positively charged) or non- ionic. Cationic detergents such as quaternary ammonium compounds (ammonium chlo-ride with each hydrogen replaced by an organic group, Figure 13.7) act by combining with phospholipids to disrupt cell membranes and affect cellular permeability.