When microorganisms are exposed to any of the treatments outlined in the preceding pages, they are not all killed instantaneously.

The kinetics of cell death

When microorganisms are exposed to any of the treatments outlined in the preceding pages, they are not all killed instantaneously. During a given time period, only a certain proportion of them will die. Suppose we had 1000 cells (an unrealistically small number, but it keeps the arithmetic simple) and that 10 per cent were killed each minute. 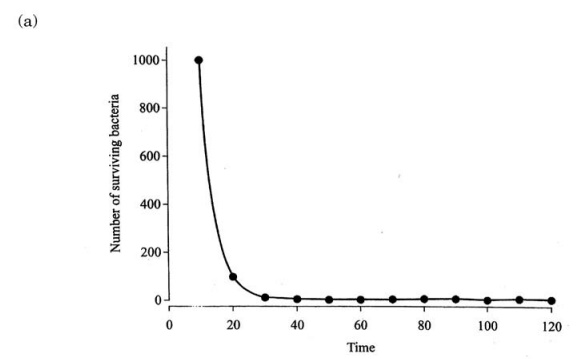 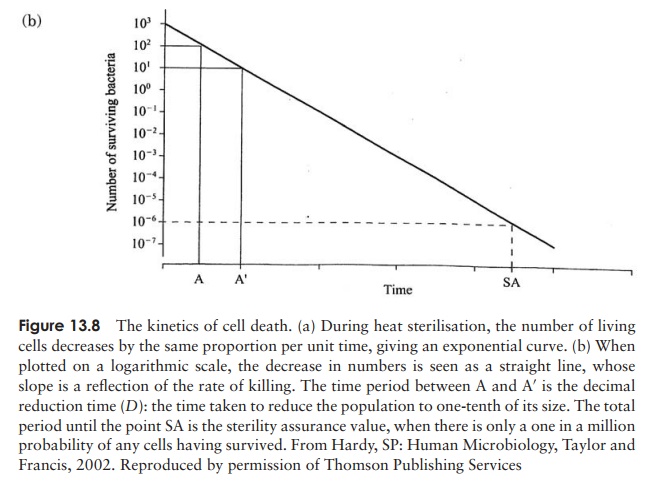 After one minute, 900 cells would remain, and after the second minute 10 per cent of these would die, leaving us with 900 − 90 = 810 survivors. After a further minute, another 10 per cent of the survivors would be killed, so 810 − 81 = 729 would be left. A plot of the surviving cells against time of exposure gives a graph such as Figure 13.8. The curve is exponential; theoretically, there will never be zero survivors, but after a while we are going to have less than one cell, let us say one tenth of a cell, which clearly can not happen. What this really means is that in a given unit volume, there will be a one in 10 chance of there being a cell present. Sterility is generally assumed when this figure falls as low as one in a million (see Figure 13.8b). Since only a proportion of the surviving population is killed per unit time, it follows that the more cells you have initially, the longer it will take to eliminate them (Figure 13.9).

The steepness of the slope in Figure 13.8(b) is an indication of the effectiveness of heat sterilisation. The decimal reduction time or D value is the time needed to reduce the population by a factor of ten (i.e. to kill 90 per cent of the population) using a particular heat treatment. The D value applies to a particular temperature; at higher temperatures, the rate of killing is enhanced, and so the D value is reduced (Figure 13.10). The increase in temperature required to reduce D by a factor of 10 is the Z value. 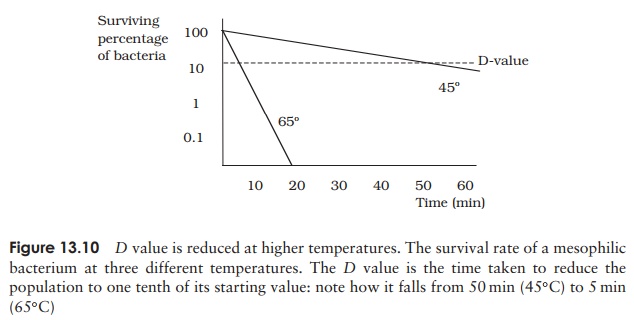 Since in real life, the microbial population is certain to be a mixed one, then the critical factor is the death rate of the most resistant species, that is, the one with the highest percentage of survivors per minute. Sterilisation protocols should therefore be based on the rate of destruction of endospores.

It should be stressed that an effective treatment regime for one organism may be wholly inappropriate for another, since organisms differ in their susceptibility to differ-ent agents. Organism A may resist heat treatment better than organism B, but be more sensitive to a particular chemical treatment.

Microorganisms as a group are much more resistant to the effects of ionising radiation than are higher organisms, and some more resistant than others. A plot of log surviving numbers against time of irradiation is shown in Figure 13.11. The decimal reduction value (D 10) is analogous to the D value used for heat sterilisation . 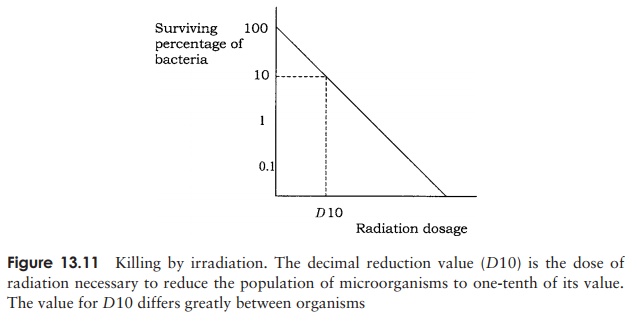