A stepper motor is a widely used device that translates electrical pulses into mechanical movement. In applications such as disk drives, dot matrix printers, and robotics, the stepper motor is used for position control. Stepper motors commonly have a permanent magnet rotor (also called the shaft) surrounded by a stator. There are also steppers called variable reluctance stepper motors that do not have a PM rotor. The most common stepper motors have four stator windings that are paired with a center-tapped common as shown in Figure 5.11. This type of stepper motor is commonly referred to as a. four-phase or unipolar stepper motor. The center tap allows a change of current direction in each of two coils when a winding is grounded, thereby resulting in a polarity change of the stator. Notice that while a conventional motor shaft runs freely, the stepper motor shaft moves in a fixed repeat-able increment, which allows one to move it to a precise position. This repeatable fixed movement is possible as a result of basic magnetic theory where poles of the same polarity repel and opposite poles attract. The direction of the rotation is dictated by the stator Poles. The stator poles are determined by the current sent through the wire coils. As the direction of the current is changed, the polarity is also changed causing the reverse motion of the rotor. The stepper motor discussed here has a total of 6 leads: 4 leads representing the four stator windings and 2 commons for the center-tapped leads. As the sequence of power is applied to each stator winding, the rotor will rotate.

There are several widely used sequences where each has a different degree of precision. Table 5.4 shows a 2-phase, 4-step stepping sequence. 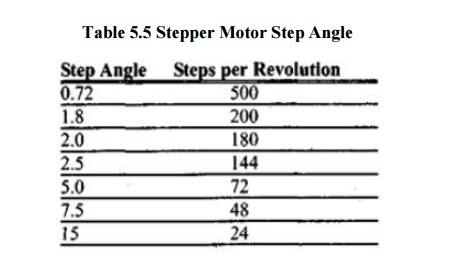 How much movement is associated with a single step? This depends on the internal construction of the motor, in particular the number of teeth on the stator and the rotor. The step angle is the minimum degree of rotation associated with a single step. Various motors have different step angles. Table 5.5 shows some step angles for various motors. In Table 5.5, notice the term steps per revolution. This is the total number of steps needed to rotate one complete rotation or 360 degrees (e.g., 180 steps x 2 degrees = 360). It must be noted that perhaps contrary to one's initial impression, a stepper motor does not need more terminal leads for the stator to achieve smaller steps. All the stepper motors discussed in this section have 4 leads for the stator winding and 2 COM wires for the center tap. Although some manufacturers set aside only one lead for the common signal instead of two, they always have 4 leads for the stators. Next we discuss some associated terminology in order to understand the stepper motor further.

Describe the 8051 connection to the stepper motor of Figure 5.11 and code a program to rotate it continuously.

The following steps show the 8051 connection to the stepper motor and its programming.

 Use an ohmmeter to measure the resistance of the leads. This should identify which COM leads are connected to which winding leads.

The common wire(s) are connected to the positive side of the motor's power supply.

In many motors, +5 V is sufficient.

The four leads of the stator winding are controlled by four bits of the 8051 port (Pl.O - P1.3). However, since the 8051 lacks sufficient current to drive the stepper motor windings, we must use a driver such as the ULN2003 to energize the stator. Instead of the ULN2003, we could have used transistors as drivers, as shown in Figure 17-9. 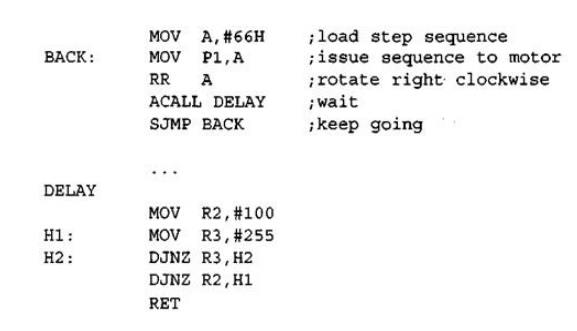 Change the value of DELAY to set the speed of rotation. We can use the single-bit instructions SETB and CLR instead of RR A to create the sequences. 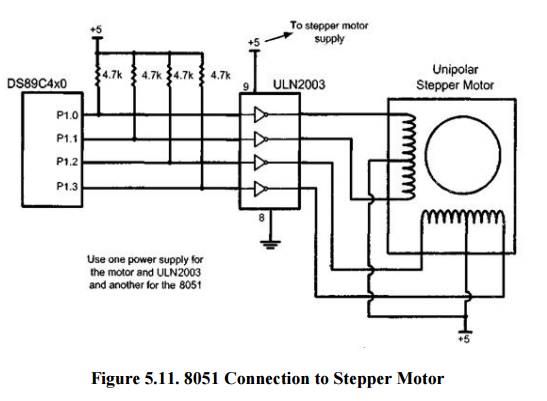 Steps per second and rpm relation:

The relation between rpm (revolutions per minute), steps per revolution, and steps per second is as follows.

The four-step sequence and number of teeth on rotor

The switching sequence shown earlier in Table 5.4 is called the 4-step switching sequence since after four steps the same two windings will be "ON" How much movement is associated with these four steps? After completing every four steps, the rotor moves only one tooth pitch. Therefore, in a stepper motor with 200 steps per revolution, the rotor has 50 teeth since 4x50 = 200 steps are needed to complete one revolution. This leads to the conclusion that the minimum step angle is always a function of the number of teeth on the rotor. In other words, the smaller the step angle, the more teeth the rotor passes.