One approach for validating a new analytical method is to analyze a standard sample containing a known amount of analyte, μ. The method’s accuracy is judged by determining the average amount of analyte in several samples, X, and using a significance test to compare it with μ The null hypothesis is that X andμ are the same and that any difference between the two values can be explained by in-

The equation for the test (experimental) statistic, texp, is derived from the confi- dence interval for μ

A typical application of this significance test, which is known as a t-test μ, is outlined in the following example. 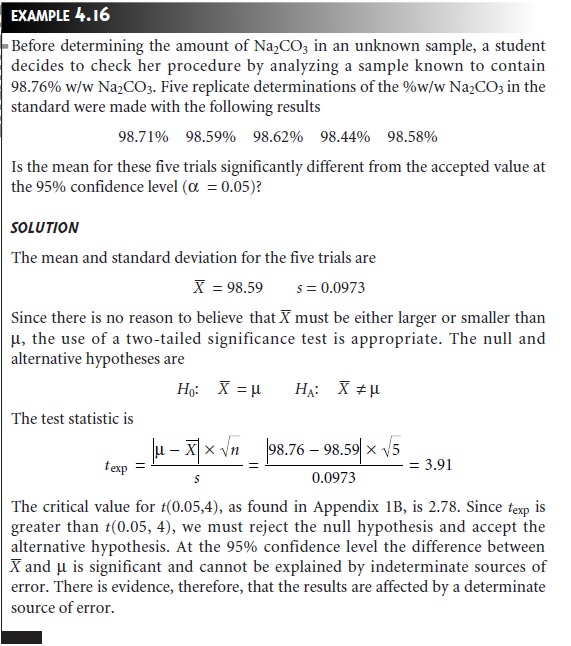 If evidence for a determinate error is found, as in Example 4.16, its source should be identified and corrected before analyzing additional samples. Failing to reject the null hypothesis, however, does not imply that the method is accurate, but only indicates that there is insufficient evidence to prove the method inaccurate at the stated confidence level.

When a particular type of sample is analyzed on a regular basis, it may be possible to determine the expected, or true variance, σ 2, for the analysis. This often is the case in clinical labs where hundreds of blood samples are analyzed each day. Repli- cate analyses of any single sample, however, results in a sample variance, s2. A statis- tical comparison of s2 to σ2 provides useful information about whether the analysis is in a state of “statistical control.” The null hypothesis is that σ 2 and s2 are identical, and the alternative hypothesis is that they are not identical.

The test statistic for evaluating the null hypothesis is called an F-test, and is given as either

depending on whether s2 is larger or smaller than σ2. Note that Fexp is defined such that its value is always greater than or equal to 1.

If the null hypothesis is true, then Fexp should equal 1. Due to indeterminate er- rors, however, the value for Fexp usually is greater than 1. A critical value, F(α, vnum, vden), gives the largest value of F that can be explained by indeterminate error. It is chosen for a specified significance level, α, and the degrees of freedom for the variances in the numerator, vnum, and denominator, vden. The degrees of freedom for s2 is n – 1, where n is the number of replicates used in determining the sample’s vari- ance. Critical values of F for α = 0.05 are listed in Appendix 1C for both one-tailed and two-tailed significance tests. 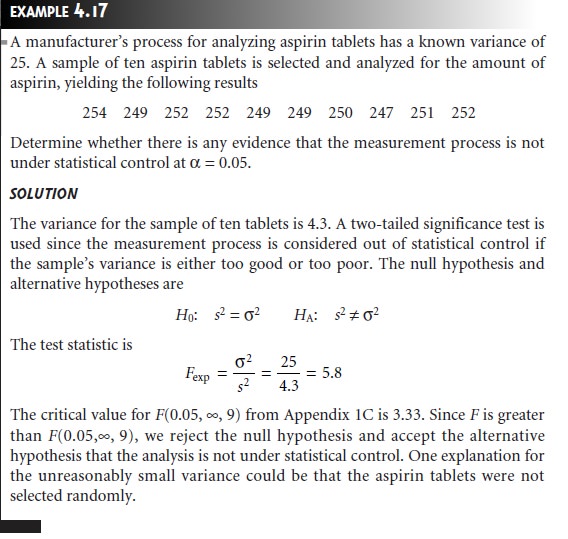 The F-test can be extended to the comparison of variances for two samples, A and B, by rewriting equation 4.16 as

where A and B are defined such that s2A is greater than or equal to s2B. An example of this application of the F-test is shown in the following example. 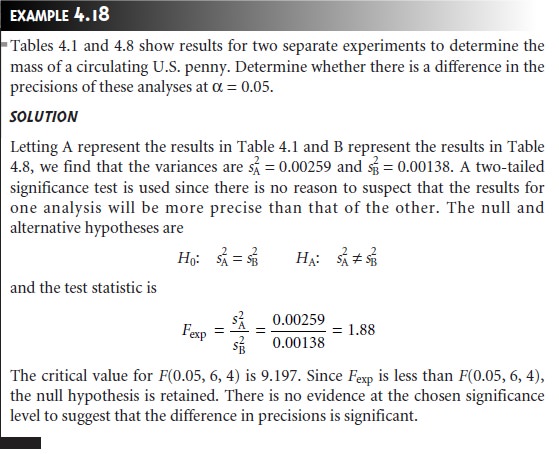 The result of an analysis is influenced by three factors: the method, the sample, and the analyst. The influence of these factors can be studied by conducting a pair of ex- periments in which only one factor is changed. For example, two methods can be compared by having the same analyst apply both methods to the same sample and examining the resulting means. In a similar fashion, it is possible to compare two analysts or two samples.

Significance testing for comparing two mean values is divided into two cate- gories depending on the source of the data. Data are said to be unpaired when each mean is derived from the analysis of several samples drawn from the same source. Paired data are encountered when analyzing a series of samples drawn from different sources.

Consider two samples, A and B, for which mean values, X–A, X–B,, and standard deviations, sA and sB, have been measured. Confidence intervals for μA and μB can be written for both samples

where nA and nB are the number of replicate trials conducted on samples A and B. A comparison of the mean values is based on the null hypothesis that X–A and X–B are identical, and an alternative hypothesis that the means are significantly different.

A test statistic is derived by letting μA equal μB, and combining equations 4.17

The value of texp is compared with a critical value, t(α, v), as determined by the cho- sen significance level, α, the degrees of freedom for the sample, v, and  whether the significance test is one-tailed or two-tailed.

It is unclear, however, how many degrees of freedom are associated with t(α, v) since there are two sets of independent measurements. If the variances sA2 and sB2 esti- mate the same σ2, then the two standard deviations can be factored out of equation 4.19 and replaced by a pooled standard deviation, spool, which provides a better esti- mate for the precision of the analysis. Thus, equation 4.19 becomes

As indicated by the denominator of equation 4.21, the degrees of freedom for the pooled standard deviation is nA + nB – 2.

Since the degrees of freedom must be an integer, the value of v obtained using equation 4.22 is rounded to the nearest integer.

Regardless of whether equation 4.19 or 4.20 is used to calculate texp, the null hy- pothesis is rejected if texp is greater than t(α, v), and retained if texp is less than or equal to t(α, v). 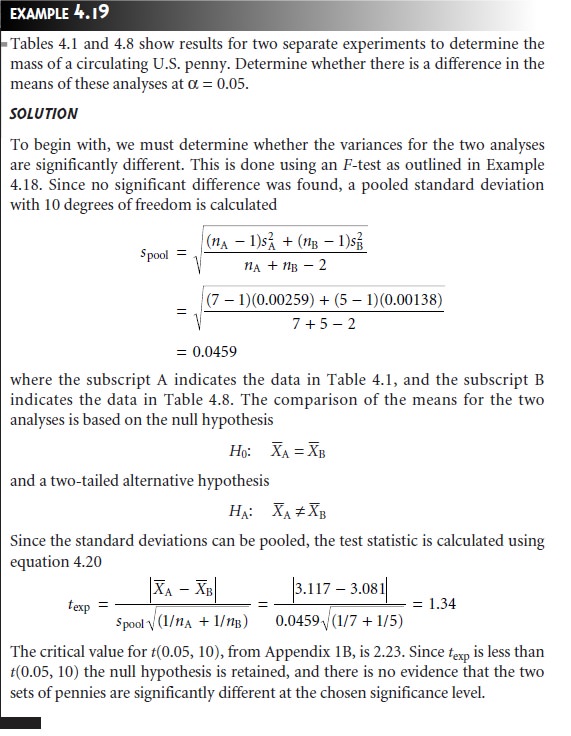 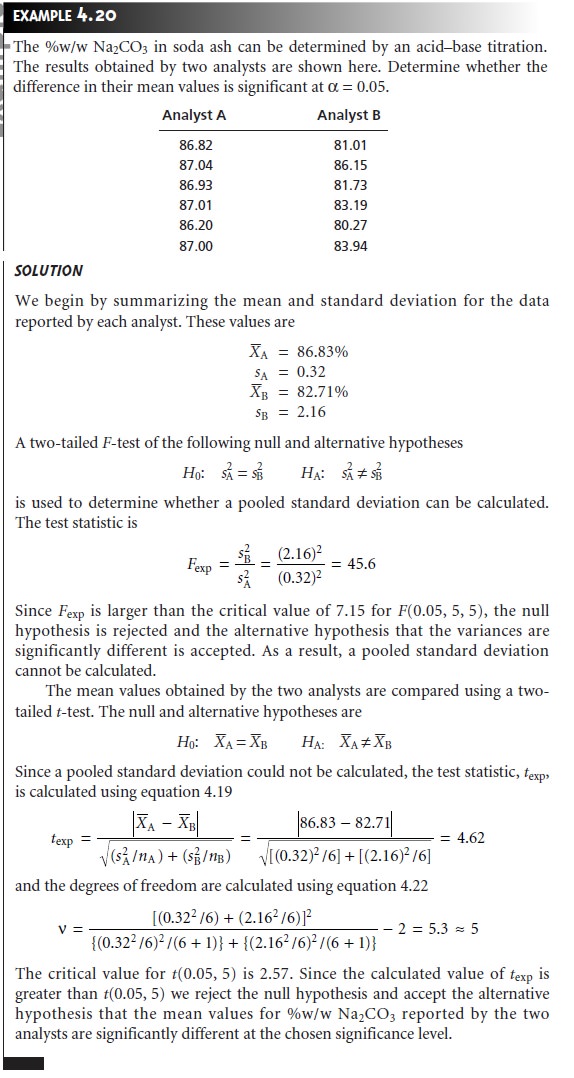 In some situations the variation within the data sets being compared is more significant than the difference between the means of the two data sets. This is commonly encountered in clinical and environmental studies, where the data being compared usually consist of a set of samples drawn from several populations. For example, a study designed to investigate two procedures for monitoring the concentration of glucose in blood might involve blood samples drawn from ten pa- tients. If the variation in the blood glucose levels among the patients is significantly larger than the anticipated variation between the methods, then an analysis in which the data are treated as unpaired will fail to find a significant difference between the methods. In general, paired data sets are used whenever the variation being investi- gated is smaller than other potential sources of variation.

The test statistic, texp, is derived from a confidence interval around d–

where n is the number of paired samples. Replacing t with texp and rearranging gives

The value of texp is then compared with a critical value, t(α, v), which is determined by the chosen significance level, α, the degrees of freedom for the sample, v, and whether the significance test is one-tailed or two-tailed. For paired data, the degrees of freedom is n – 1. If texp is greater than t(α, v), then the null hypothesis is rejected and the alternative hypothesis is accepted. If texp is less than or equal to t(α, v), then the null hypothesis is retained, and a significant difference has not been demon- strated at the stated significance level. This is known as the paired t-test. 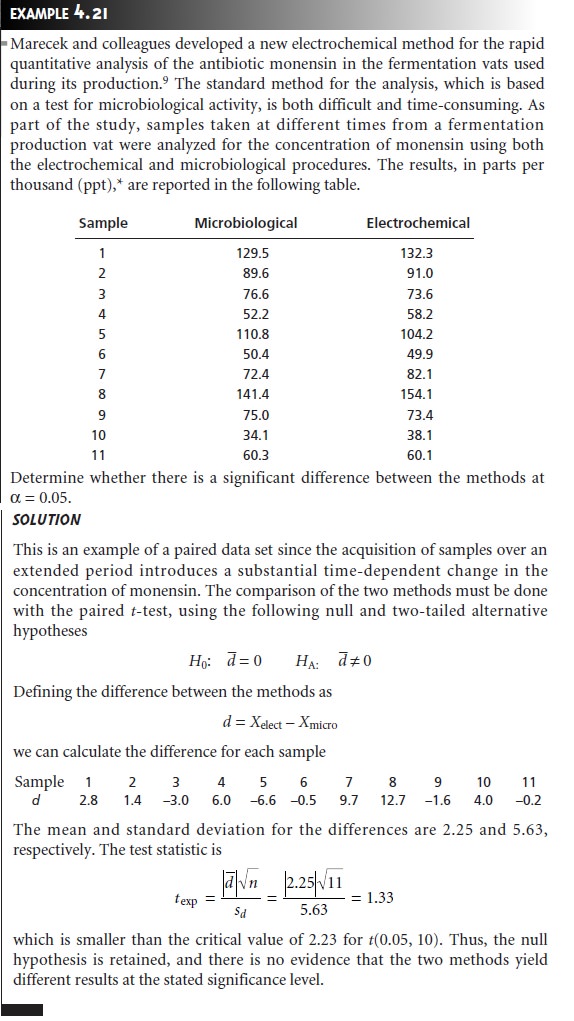 On occasion, a data set appears to be skewed by the presence of one or more data points that are not consistent with the remaining data points. Such values are called outliers. The most commonly used significance test for identifying outliers is Dixon’s Q-test. The null hypothesis is that the apparent outlier is taken from the same popula- tion as the remaining data. The alternative hypothesis is that the outlier comes from a different population, and, therefore, should be excluded from consideration.

where n is the number of members in the data set, including the suspected outlier. It is important to note that equations 4.23 and 4.24 are valid only for the detection of a single outlier. Other forms of Dixon’s Q-test allow its extension to the detection of multiple outliers.10 The value of Qexp is compared with a critical value, Q(α, n), at a significance level of α. The Q-test is usually applied as the more conservative two- tailed test, even though the outlier is the smallest or largest value in the data set. Values for Q(α, n) can be found in Appendix 1D. If Qexp is greater than Q(α, n), then the null hypothesis is rejected and the outlier may be rejected. When Qexp is less than or equal to Q(α, n) the suspected outlier must be retained. 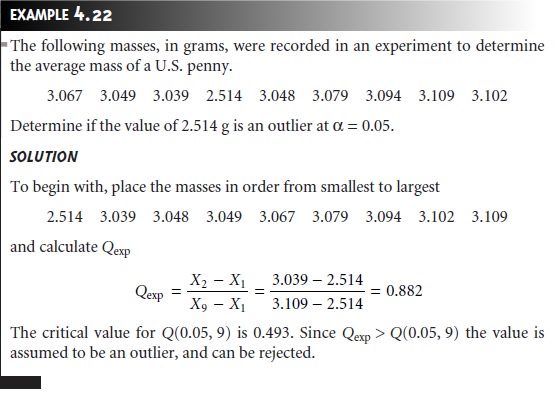 The Q-test should be applied with caution since there is a probability, equal to α, that an outlier identified by the Q-test actually is not an outlier. In addition, the Q-test should be avoided when rejecting an outlier leads to a precision that is un- reasonably better than the expected precision determined by a propagation of un- certainty. Given these two concerns it is not surprising that some statisticians cau- tion against the removal of outliers. On the other hand, testing for outliers can provide useful information if we try to understand the source of the suspected out- lier. For example, the outlier identified in Example 4.22 represents a significant change in the mass of a penny (an approximately 17% decrease in mass), due to a change in the composition of the U.S. penny. In 1982, the composition of a U.S. penny was changed from a brass alloy consisting of 95% w/w Cu and 5% w/w Zn, to a zinc core covered with copper. The pennies in Example 4.22 were therefore drawn from different populations.