The probabilistic nature of a confidence interval provides an opportunity to ask and answer questions comparing a sample’s mean or variance to either the accepted values for its population or similar values obtained for other samples. For example, confidence intervals can be used to answer questions such as “Does a newly devel- oped method for the analysis of cholesterol in blood give results that are signifi- cantly different from those obtained when using a standard method?” or “Is there a significant variation in the chemical composition of rainwater collected at different sites downwind from a coalburning utility plant?” In this section we introduce a general approach to the statistical analysis of data.

Let’s consider the following problem. Two sets of blood samples have been collected from a patient receiving medication to lower her concentration of blood glucose. One set of samples was drawn immediately before the medication was adminis- tered; the second set was taken several hours later. The samples are analyzed and their respective means and variances reported. How do we decide if the medication was successful in lowering the patient’s concentration of blood glucose?

The process by which we determine the probability that there is a significant difference between two samples is called significance testing or hypothesis testing. Before turning to a discussion of specific examples, however, we will first establish a general approach to conducting and interpreting significance tests.

The difference between retaining a null hypothesis and proving the null hy- pothesis is important. To appreciate this point, let us return to our example on de- termining the mass of a penny. After looking at the data in Table 4.12, you might pose the following null and alternative hypotheses 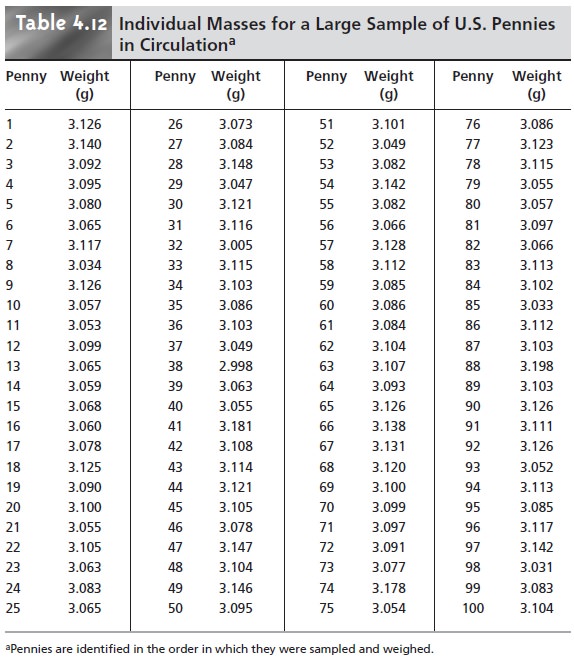 for which the null hypothesis is rejected if μ falls within the shaded areas shown in Figure 4.10(b) and Figure 4.10(c), respectively. In each case the shaded area repre- sents 5% of the area under the probability distribution curve. These are examples of  one-tailed significance tests.

The second type of error occurs when the null hypothesis is retained even though it is false and should be rejected. This is known as a type 2 error, and its probability of occurrence is β. Unfortunately, in most cases β cannot be easily calculated or estimated.

The probability of a type 1 error is inversely related to the probability of a type 2 error. Minimizing a type 1 error by decreasing α, for example, increases the likeli- hood of a type 2 error. The value of α chosen for a particular significance test, therefore, represents a compromise between these two types of error. Most of the examples in this text use a 95% confidence level, or α = 0.05, since this is the most frequently used confidence level for the majority of analytical work. It is not unusual, however, for more stringent (e.g. α = 0.01) or for more lenient (e.g. α = 0.10) confidence levels to be used.