Disorders of the spinal cord 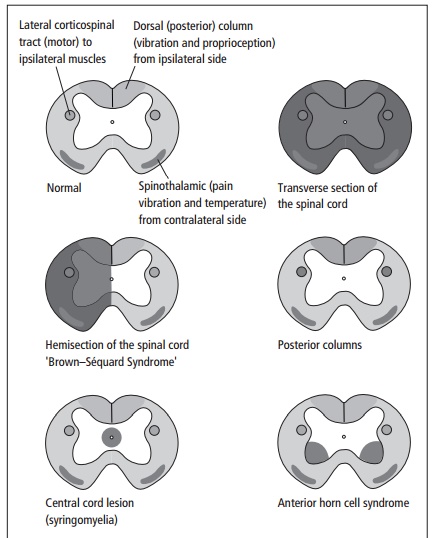 ·        The motor pathways and vibration and proprioception cross in the medulla, so that lesions in the spinal cord cause ipsilateral deficits.

Transverse section of the spinal cord

Motor: LMN signs at level, UMN signs below the level. Sensory: The sensory level, below which there is loss of cutaneous sensation, indicates the site of a spinal cord lesion.

Sphincter control: Loss of bladder and bowel control. Causes include fracture dislocation of vertebrae, penetrating trauma, transverse myelitis or compression due to a tumour.

Hemisection of the spinal cord

Motor: Ipsilateral LMN signs at level and UMN signs below.

Sensory: Below the level of the lesion there is ipsilateral vibration and proprioceptive loss, and contralateral loss of pain and temperature sensation. Light touch is often reduced.

Causes include multiple sclerosis, trauma, tumour (angioma) and degeneration due to radiation.

Disease of the posterior columns causes an unsteady gait (sensory ataxia) due to loss of position sense in the legs and uncertainty of foot position. Sensation to light touch and proprioception are lost.

·        Subacute combined degeneration of the cord (vitamin B12 deficiency): There are UMN signs in the lower limbs due to the disease also affecting the lateral corticospinal tracts. There may be an associated peripheral neuropathy which may reduce or abolish tendon reflexes, masking the expected UMN findings.

·        Tabes dorsalis (3˚ syphilis): Degeneration of the dorsal roots initially followed by posterior column involvement. It is characterised by shooting pains, with loss of proprioception, numbness or paraesthesia.

Syringomyelia is a fluidfilled cavity in the spinal cord as sociated with Arnold–Chiari malformations, spinal cord tumours and trauma. Usually localised to a few segments, commonly affecting the cervical canal.

only in the affected segments (or just below). Sensation in the lower limbs is preserved.

Late posterior column involvement, when all levels below are affected.

Motor: LMN signs, which may be unilateral (ipsilateral to the lesion) or bilateral.

Specific loss of these cells occurs in motor neurone disease (see also below) and poliomyelitis.

The commonest pattern of MND affects the anterior horn cells and the lateral corticospinal tracts. It is characterised by mixed UMN and LMN signs. Patients often present with spastic quadriparesis, brisk reflexes and upgoing plantars (UMN signs), fasciculation may be present. With progression, muscle wasting and fasciculation may become more obvious. No sensory signs, although sensory symptoms may be reported.

Sensory: Loss of pain and temperature sensation (the dorsal column sensory pathways may be totally or only partly spared).

It is associated with atherosclerosis and dissecting abdominal aortic aneurysm. Total loss of blood flow causes an acute presentation, milder UMN & LMN symptoms may occur in ‘transient ischaemic attacks’, which may partially recover.