1. Saprophytic mode of nutrition in angiosperms 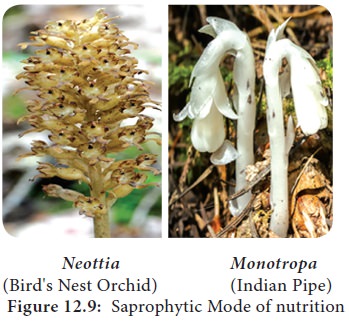 2. Parasitic mode of nutrition in angiosperms

Organisms deriving their nutrient from another organism (host) and causing disease to the host are called parasites.

a. Obligate or Total parasite - Completely depends on host for their survival and produces haustoria.

i. Total stem parasite: The leafless stem twine around the host and produce haustoria. Example: Cuscuta (Dodder), a rootless plant growing on Zizyphus, Citrus and so on.

ii.           Total root parasite: They do not have stem axis and grow in the roots of host plants produce haustoria. Example: Rafflesia, Orobanche and Balanophora.

b. Partial parasite - Plants of this group contain chlorophyll and synthesize carbohydrates. Water and mineral requirements are dependent on host plant.

Loranthus grows on fig and mango trees and absorb water and minerals from xylem. 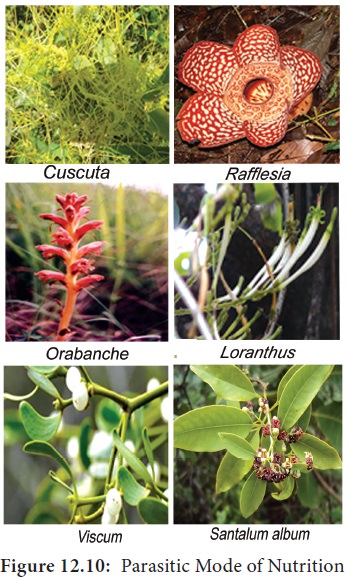 a. Lichens: It is a mutual association of Algae and Fungi. Algae prepares food and fungi absorbs water and provides thallus structure.

b. Mycorrhizae: Fungi associated with roots of higher plants including Gymnosperms. Example: Pinus.

This association is found in Cycas where 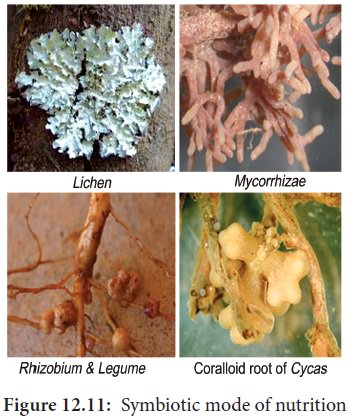 a. Nepenthes (Pitcher plant): Pitcher is a modified leaf and contains digestive enzymes. Rim of the pitcher is provided with nectar glands and acts as an attractive lid. When insect is trapped, proteolytic enzymes will digest the insect.

b. Drosera (Sundew): It consists of long club shaped tentacles which secrete sticky digestive fluid which looks like a sundew.

c. Utricularia (Bladder wort): Submerged plant in which leaf is modified into a bladder to collect insect in water.

d. Dionaea (Venus fly trap): Leaf of this plant modified into a colourful trap. Two folds of lamina consist of sensitive trigger hairs and when insects touch the hairs it will close (Figure 12.12). 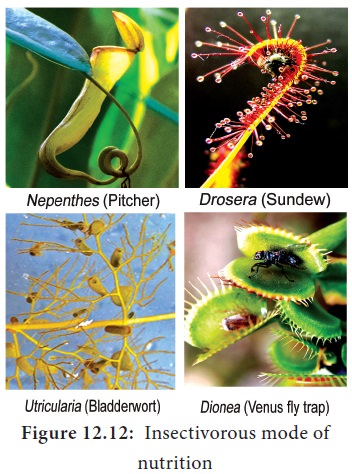 Lichens are indicators of SO2  pollution and a pioneer species in xeric succession.