6. The nitrogen is present in the atmosphere in huge amount but higher plants fail to utilize it. Why?

1. Plants absorb minerals from the soil along with water with the help of Roots. Minerals are absorbed as salts.

2. Nitrogen is present in large quantities in the atmosphere in agaseous from. The gaseous nitrogen must be fixed in the form of Nitrate salts in the soil to facilitate absorption by plant roots.

3. Nitrogen fixation can occur 2 ways by

a) Non - Biological means (Industrial process or by lighting)

7. Why is that in certain plants deficiency symptoms appear first in younger parts of the plants while in others, they do so in mature organs?

When deficiency symptoms appear first, we can notice the differences in old and younger leaves. It is mainly due to mobility of minerals. Based on this, they are classified into 1. Actively mobile minerals and 2. Relatively immobile minerals

Deficiency symptoms first appear on old and senescent leaves due to active movement of minerals to younger leaves, than the older leaves.

Plant A in nutrient medium shows whiptail disease: Mineral deficiency is due to Molybdenum.

Plant B in a nutrient medium shows little leaf disease: Mineral deficiency is due to Zinc

9. Write the role of nitrogenase enzyme in nitrogen fixation?

Nitrogen fixation is the first step in Nitrogen cycle, during which gaseous nitgrogen from the atmosphere is fixed. It required nitrogenase enzyme complex nitrogenase is active only in anaerobic condition. To create this anaerobic condition, a pigment known as leghaemoglobin is synthesized in the nodules which acts as oxygen scavenger and removes oxygen.

10. Explain the insectivorous mode of nutrition in angiosperms?

a. Nepenthes (Pitcher plant): Pitcher is a modified leaft and contains digestive enzymes. Rim of the pitcher is provided with nectar glands and acts as an attractive lid. When insect is trapped, proteolytic enzymes will digest the insect.

b. Drosera (Sundew): It consists of long club shaped tentacles which secrete sticky digestive fluid which looks like a sundew.

c. Utricularia (Bladder wort): Submerged plant in which leaf is modified into a bladder to collect insect in water.

d. Dionaea (Venus fly trap): Leaf of this plant modified into a colourful trap. Two folds of lamina consist of sensitive trigger hairs and when insects touch the hairs it will close. 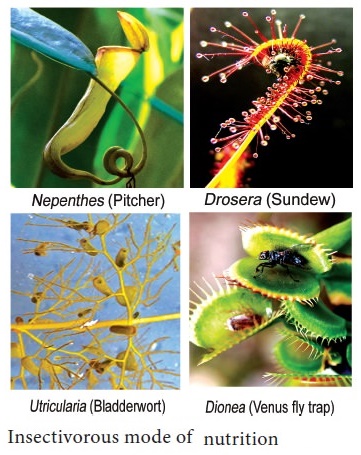 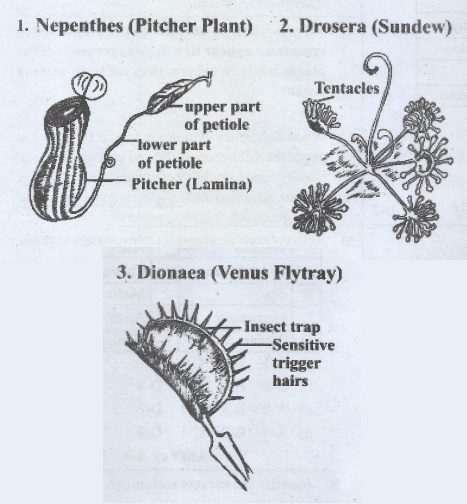