To increase the productivity and also to avoid mineral toxicity knowledge of critical concentration is essential.

Critical concentration and toxicity of minerals 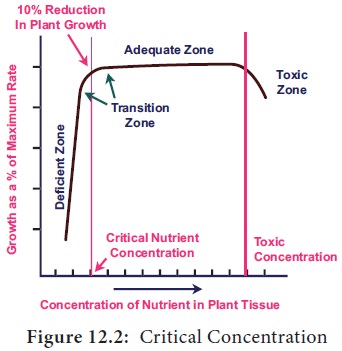 Increased Concentration of Manganese will prevent the uptake of Fe and Mg, prevent translocation of Ca to the shoot apex and cause their deficiency. The symptoms of manganese toxicity are appearance of brown spots surrounded by chlorotic veins.

For theories regarding, translocation of minerals please refer Chapter- 11.

Iron and Manganese exhibit competitive behaviour. Deficiency of Fe and Mn shows similar symptoms. Iron toxicity will affect absorption of manganese. The possible reason for iron toxicity is excess usage of chelated iron in addition with increased acidity of soil (PH less than 5.8) Iron and manganese toxicity will be solved by using fertilizer with balanced ratio of Fe and Mn.