Sources for the study of early Tamil society

Sources for the study of early Tamil society

The sources for reconstructing the history of the ancient Tamils are:

Tholkappiyam, attributed to Tholkappiyar, is the earliest written work on Tamil grammar. Apart from elaborating the rules of grammar, the third section of Tholkappiyam also describes poetic conventions that provide information on Tamil social life.

The Ettuthogai or the eight anthologies are

The Pathinen Kilkanakku comprises eighteen texts elaborating on ethics and morals. The pre-eminent work among these is the Thirukkural composed by Thiruvalluvar. In 1330 couplets Thirukkural considers questions of morality, statecraft and love.

The epics or Kappiyams are long narrative poem of very high quality. They are,

Epigraphy is the study of inscriptions. Inscriptions are documents scripted on stone, copper plates, and other media such as coins, rings, etc. The development of script marks the beginning of the historical period. The period before the use of written script is called prehistoric period. Tamil-Brahmi was the first script used for writing in Tamil Nadu. Inscriptions in Tamil-Brahmi are found in caves and rock shelters, and on pottery and other objects (coins, rings and seals).

Tamil-Brahmi inscriptions have been found in more than 30 sites in Tamil Nadu mostly on cave surfaces and rock shelters. These caves were the abodes of monks, mostly Jaina monks. The natural caves were converted into residence by cutting a drip-line to keep rain water away from the cave. Inscriptions often occur below such drip-lines. The sites have smooth stone beds carved on rock surface for monks who led a simple life and lived in these shelters. Merchants and kings converted these natural formations as habitation for monks, who had renounced worldly life. Mangulam, Muttupatti, Pugalur, Arachalur and Kongarpuliyankulam and Jambai are some of the major sites of such caves with Tamil-Brahmi inscriptions. Around Madurai many such caves with Tamil-Brahmi inscriptions can still be seen. Many of them are located along ancient trade routes. 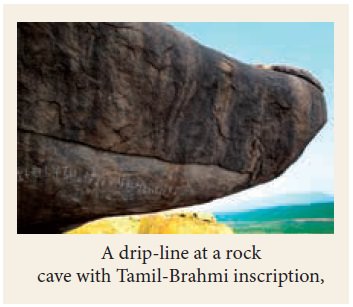 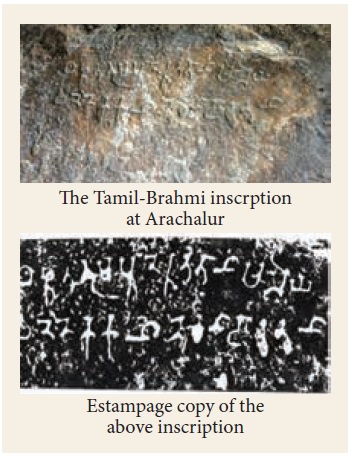 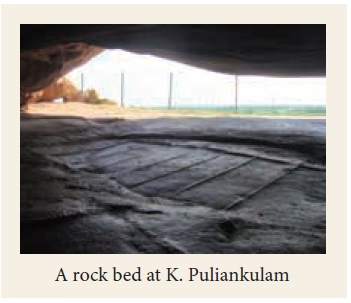 Note: You will notice that among the old inscriptions, people (both local and tourists) have marked their names thereby destroying some of the ancient inscriptions. Such acts of destruction of heritage property or property belonging to others are called vandalism.

Hero stones are memorials erected for those who lost their lives in the battles and in cattle raids. As cattle were considered an important source of wealth, raiding cattle owned by adjoining tribes and clans was common practice in a pastoral society. During the Sangam Age, the Mullai landscape followed the pastoral way of life. Tribal chieftains plundered the cattle wealth of enemies whose warriors fought to protect their cattle. Many warriors died in such battles and were remembered as martyrs. Memorial stones were erected in their honour. Sangam literature vividly portrays these battles and clashes, and describes such hero stones as objects of worship. Tholkappiyam describes the procedures for erecting hero stones.

Hero stones of the Sangam Age with Tamil-Brahmi inscriptions can be found at Pulimankombai and Thathapatti in Theni district and Porpanaikottai in Pudukkottai district. Those of the Sangam Age discovered till now do not have images or sculptures. 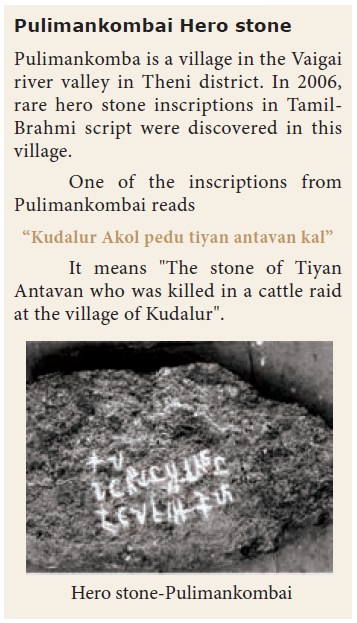 Hero stones of the post-Sangam Age and the Pallava period occur in large numbers in pastoral regions especially around the Chengam region near Thiruvannamalai district.

These hero stones have inscriptions and the images of warriors and names of heroes.

Pottery vessels from the Early Historic Period have names of people engraved on them in Tamil-Brahmi script. Potsherds have been discovered in Arikkamedu, Azhagankulam, Kodumanal, Keezhadi, and many other sites in Tamil Nadu. Pottery inscribed with names in Tamil-Brahmi script have also been found in Berenike and Quseir al Qadhim in Egypt and in Khor Rori in Oman indicating that early Tamils had trade contacts with West Asia and along the Red Sea coast. People etched their names on pottery to indicate ownership. Many of the names are in Tamil while some are in Prakrit. 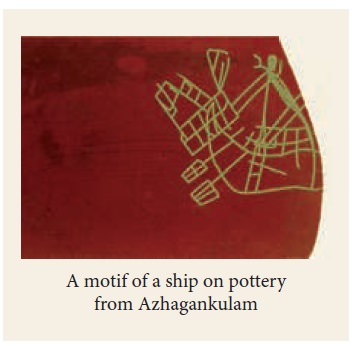 Prakrit Prakrit was the language used by the common people in the Northern part of India during the Mauryan period.

Archaeology is the study of the past by interpretation of the material cultural remains. Such remains are unearthed by the systematic excavation of old inhabitation sites called archaeological sites. Archaeological sites have mounds which are an accumulation of soil, pottery, building and organic remains and objects. In many parts of Tamil Nadu they are called Nattam, Kottai and Medu. Such sites provide evidence of how people lived in the past.

Archaeological excavation refers to systematically digging a site to recover material evidence for exploring and i n t e r p r e t i n g societies of the past. 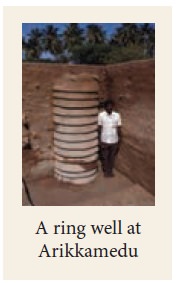 Archaeological excavations at the early historic sites are the source of evidence of the activities of the Sangam Age people. Excavations at Arikkamedu, Azhagankulam, Uraiyur, Kanchipuram,

Kaveripoompattinam, Korkai, Vasavasamudram, Keezhadi, Kodumanal in Tamil Nadu, and Pattanam in Kerala provide the evidence we have of this period.

The  Archaeological  Survey  of India (ASI) is a Central government agency that manages archaeological sites and monuments in India. The Government of Tamil Nadu has its own department for archaeology called the Tamil Nadu State Department of Archaeology. The Indian Treasure Trove Act (1878), the Antiquities and Art Treasures Act (1972), the Ancient Monuments and Archaeological Sites and Remains Act (1958) are legislation related to the preservation of archaeological remains in India.

Archaeologists have found evidence of brick structures and industrial activities, as well as artefacts such as beads, bangles, cameos, intaglios, and other materials in these sites. Tamil-Brahmi inscriptions on pottery and coins have also been unearthed. Evidences of the various arts, crafts and industries together help us reconstruct the way of life of the people of those times. From this we learn and understand how they might have lived. 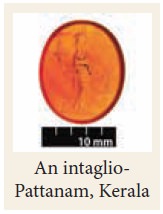 Cameo – an ornament made in precious stone where images are carved on the surface.

Intaglio – an ornament in which images are carved as recess, below the surface.

Coins as a medium of exchange were introduced for the first time in the Sangam Age. The coins of the Cheras, the Cholas and the Pandyas, punch-marked coins, and Roman coins form another important source of evidence from the Sangam Age. Punch-marked coins have been found at Kodumanal and Bodinayakkanur. Roman coins are concentrated in the Coimbatore region, and are found at Azhagankulam, Karur, and Madurai. They were used as bullion for their metal value and as ornaments. 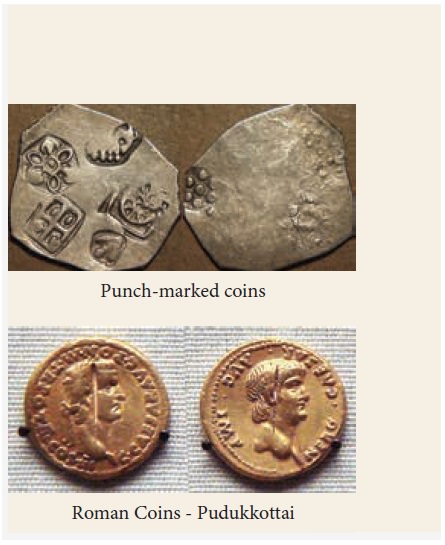 Bullion means precious metal available in the form of ingots.

Punch-marked coins are the earliest coins used in India. They are mostly made of silver and have numerous symbols punched on them. Hence, they are known as punch-marked coins

Arthasastra, the classic work on economy and statecraft authored by Chanakya during the Mauryan period, refers to Pandya kavataka. It may mean the pearl and shells from the Pandyan country.

Chronicle is a narrative text presenting the important historical events in chronological order.

Periplus of Erythrean Sea is an ancient Greek text whose author is not known. The term Periplus means navigational guide used by sailors. Erythrean Sea refers to the waters around the Red Sea. It makes references to the Sangam Age ports of Muciri, Thondi, Korkai and Kumari, as well as the Cheras and the Pandyas.

Pliny the Elder, was a Roman who wrote Natural History. Written in Latin, it is a text on the natural wealth of the Roman Empire. Pliny speaks about the pepper trade with India and he states that it took 40 days to reach India, from Ocealis near North East Africa, if the south west monsoon wind was favourable. He also mentions that the Pandyas of Madurai controlled the port of Bacare on the Kerala coast. The current name of Bacare is not known.

Pliny laments the loss of Roman wealth due to Rome’s pepper trade with India – an indication of the huge volume and value of the pepper that was traded.

Ptolemy’s Geography is a gazetteer and atlas of Roman times providing geographical details of the Roman Empire in the second century CE. Kaveripoompattinam (Khaberis Emporium), Korkai (Kolkoi), Kanniyakumari (Komaria), and Muciri (Muziris) are some of the places mentioned in his Geography.

Peutingerian table is an illustrated map of the Roman roads. It shows the areas of ancient Tamilagam and the port of Muziris. 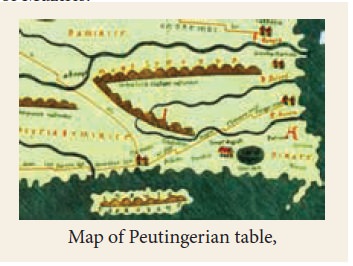 Note: Taprobane refers to Sri Lanka as Island. Muziris refers to the port of Muchiri.

Vienna papyrus, a Greek document datable to the second century CE, mentions Muciri’s trade of olden days. It is in the Papyrus Museum attached to the Austrian National Library, Vienna (Austria). It contains a written agreement between traders and mentions the name of a ship, Hermapollon, and lists articles of export such as pepper and ivory that were shipped from India to the Roman Empire.

Papyrus, a paper produced out of the papyrus plant used extensively for writing purposes in ancient Egypt.