The economy was mixed as elaborated in the Thinai concept.

The economy was mixed as elaborated in the Thinai concept. People practiced agriculture, pastoralism, trade and money exchange, hunting-gathering, and fishing depending upon the eco-zones in which they lived.

Agriculture was one of the main sources of subsistence. Crops like paddy, sugarcane, millets were cultivated. Both wet and dry land farming were practiced. In the riverine and tank -irrigated areas, paddy was cultivated. Millets were cultivated in dry lands. Varieties of rice such as sennel (red rice), vennel (white rice), and aivananel (a type of rice) are mentioned in the literature. Rice grains were found in burial urns at excavations in Adichanallur and Porunthal. People in the forest adopted punam or shifting cultivation.

Industries and Crafts of the Sangam Age

Craft production and craft specialization were important aspects of urbanization. In the Sangam Age there were professional groups that produced various commodities. The system of production of commodities is called industry.

Pottery was practised in many settlements. People used pottery produced by Kalamceyko (potters) in their daily activities and so they were made in large numbers. Black ware, russet-coated painted ware, black and red ware potteries were the different types of pottery used.

Iron manufacturing was an important artisanal activity. Iron smelting was undertaken in traditional furnaces and such furnaces, with terracotta pipes and raw ore have been found in many archaeological sites. For instance evidence of iron smelting has been found in Kodumanal and Guttur. Sangam literature speaks of blacksmiths, and their tools and activities. Iron implements were required for agriculture and warfare (swords, daggers, and spears).

Sangam Age people adorned themselves with a variety of ornaments. 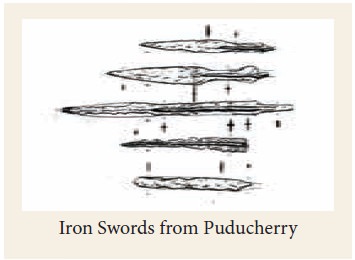 While the poor wore ornaments made of clay, terracotta, iron, and leaves and flowers, the rich wore jewellery made of precious stones, copper, and gold. 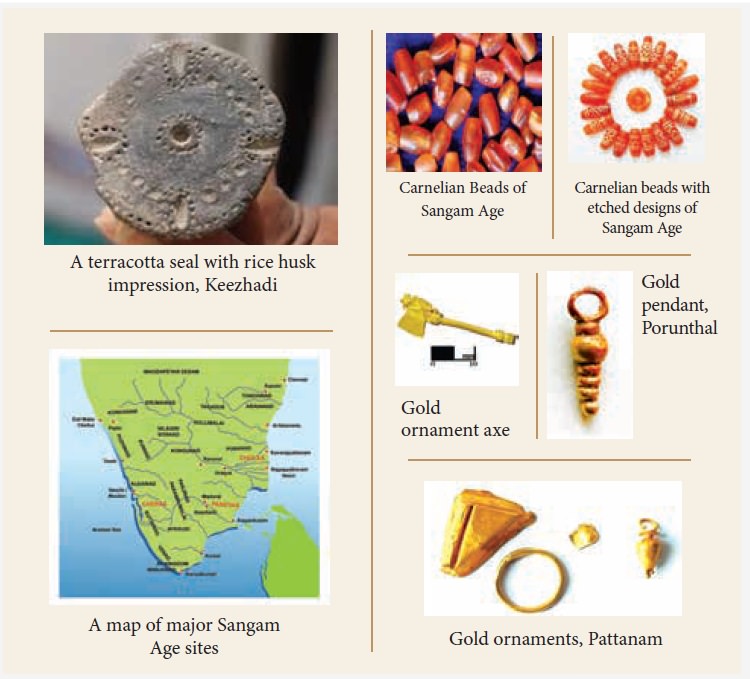 Quartz, amethyst (sevvantikkal) and carnelian (semmanikkal) were some of the semi-precious stones used for making ornaments. Diamond drills were used to pierce holes in the hard stones and etched carnelian beads have been found in the megalithic monuments.

The Pamban coast is famous for pearl fishery. A pearl has been discovered in recently excavated Keezhadi site. Shell bangles were very common in the Sangam Age. The Parathavars collected conch shells from the Pamban Island, which were cut and crafted into bangles by artisans. Whole shells as well as fragments of bangles have been found at many sites. Sangam literature describes women wearing shell bangles.

Textile production was another important occupation. Evidence of spindle whorls and pieces of cloth have been found at Kodumanal. Literature too refers to clothes called kalingam and other fine varieties of textiles. Periplus also mentions the fine variety of textiles produced in the Tamil region.

Spindle whorls were used for making thread from cotton.

The terms vanikan and nigama (guild) appear in Tamil-Brahmi inscriptions. There were different types of merchants: gold merchants, cloth merchants, and salt merchants. Salt merchants were called Umanars and they travelled in bullock carts along with their family.

Bullock carts and animals were used to transport goods by land. Trade routes linked the various towns of Tamilagam. Various types of water crafts and sea-going vessels such as Kalam, Pahri, Odam, Toni, Teppam, and Navai are also mentioned in Tamil literature. 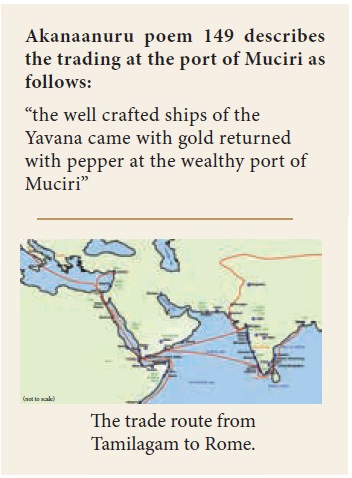 Barter was the primary mode of exchange. For instance, rice was exchanged for fish. Salt was precious and a handful of it would fetch an equal amount of rice. The extensive availability of coin hoards of the Sangam Age of the Cheras, Cholas, Pandyas, and Malayaman indicates that they were used widely.

Yavanar referred to the Westerners, including the Greeks, Romans and West Asian people. Yavana derives from the Greek region of Ionia.

An Indian jar with 7.5 kg of pepper, teak wood, a potsherd with Tamil-Brahmi inscription and Indian pottery have been discovered at Berenike, a port on the Red Sea coast of Egypt.

At Quseir al Qadhim, another port located north of Berenike on the Red Sea Coast, three Tamil-Brahmi inscriptions, Panaiori, Kanan, and Cattan, have been found on pottery discovered here.

A stone with the name “Perumpatankal” has been found at Khuan Luk Pat, Thailand. Southeast Asia was known as Suvarna Bhumi in Tamil literature. This stone was used by a person called Perumpattan, probably a goldsmith. It was a touchstone used to test the purity of gold.