(a) Implications of the New Land Tenures (c) Famines and Emigration of Indians to Overseas British Colonies (b) Laissez Faire Policy and De-industrialization: Impact on Indian Artisans

(a) Implications of the New Land Tenures

The British destroyed the traditional basis of Indian land system. In the pre-British days, the land revenue was realised by sharing the actual crop with the cultivators. The British fixed the land revenue in cash without any regard to various contingencies, such as failure of crops, fall in prices and droughts or floods. Moreover, the practice of sale in settlement of debt encouraged money lenders to advance money to landholders and resorting to every kind of trickery to rob them of their property.

There were also two other major implications of the new land settlements introduced by the East India Company. They institutionalised the commodification of land and commercialisation of agriculture in India. As mentioned earlier, there was no private property in land in pre-British era. Now, land became a commodity that could be transferred either by way of buying and selling or by way of the administration taking over land from holders, in lieu of default on payment of tax/rent. Land taken over in such cases was auctioned off to another bidder. This created a new class of absentee landlords who lived in the cities and extracted revenue from the lands without actually living on the lands. In the traditional agricultural set-up, the villagers produced largely for their consumption among themselves. After the new land settlements, agricultural produce was predominantly for the market.

The commodification of land and commercialisation of agriculture did not improve the lives and conditions of the peasants. Instead, this created discontent among the peasantry and made them restive. These peasants later on turned against the imperialists and their collaborators.

(b) Laissez Faire Policy and De-industrialization: Impact on Indian Artisans

The policy of the Company in the wake of Industrial Revolution in England resulted in the de-industrialization of India. This continued until the beginning of the World War I. The British Government pursued a policy of free trade or laissez faire. Raw materials like cotton, jute and silks from India were taken to Britain.

The finished products made from those raw materials were then transported back to the Indian markets. Mass production with the help of technological advancement enabled them to flood the Indian market with their goods. It was available at a comparatively cheaper price than the Indian handloom cloth. Prior to the arrival of the British, India was known for its handloom products and handicrafts. It commanded a good world market. However, as a result of the colonial policy, gradually Indian handloom products and handicrafts lost there market, domestic as well as international. Import of English articles into India threw the weavers, the cotton dressers, the carpenters, the blacksmiths and the shoemakers out of employment. India became a procurement area for the raw material and the farmers were forced to produce industrial crops like indigo and other cash crops like cotton for use in British factories. Due to this shift, subsistence agriculture, which was the mainstay for several hundred years, suffered leading to food scarcity. 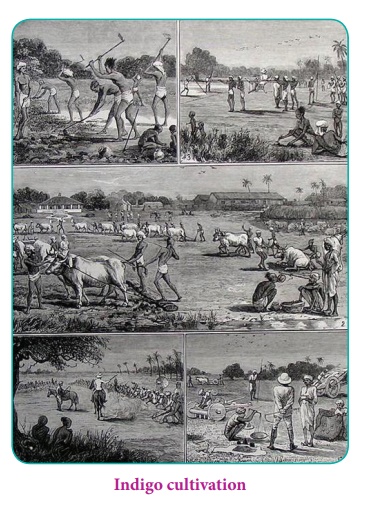 The Indigo revolt of 1859 – 60 in Bengal was one of the responses from the Indian farmer to the oppressive policy of the British. Indian tenants were forced to grow indigo by their planters who were mostly Europeans. Used to dye the clothes indigo was in high demand in Europe. Peasants were forced to accept meagre amounts as advance and enter into unfair contracts. Once a peasant accepted the contract, he had no option but to grow indigo on his land. The price paid by the planter was far lower than the market price. Many a times, the peasants could not even pay their land revenue dues. Hoping that the authorities would address their concerns, the peasants wrote several petitions to authorities and organised peaceful protests. As their plea for reform went in vain, they revolted by refusing to accept any further advances and enter into new contracts. Peasants, through the Indigo revolt of 1859-60, were able to force the planters to withdraw from northern-Bengal.

(c) Famines and Emigration of Indians to Overseas British Colonies

As India became increasingly de-industrialised and weavers and artisans engaged in handicrafts were thrown out of employment, there were recurrent famines due to the neglect of irrigation and oppressive taxation on land. Before the arrival of the British, Indian rulers had ameliorated the difficulties of the populace in times of famines by providing tax relief, regulating the grain prices and banning food exports from famine-hit areas. But the British extended their policy of non-intervention (laissez faire) even to famines. As a result, millions of people died of starvation during the Raj. It has been estimated that between 1770 and 1900, twenty five million Indians died in famines. William Digby, the editor of Madras Times, pointed out that during 1793-1900 alone an estimated five million people had died in all the wars around the world, whereas in just ten years (1891-1900), nineteen million had died in India in famines alone.

Sadly when people were dying of starvation millions of tonnes of wheat was exported to Britain. During the 1866 Orissa Famine, for instance, while a million and a half people starved to death, the British exported 200 million pounds of rice to Britain. The Orissa Famine prompted nationalist Dadabhai Naoroji to begin his lifelong investigations into Indian poverty. The failure of two successive monsoons caused a severe famine in the Madras Presidency during 1876-78. The viceroy Lytton adopted a hands-off approach similar to that followed in Orissa. An estimated 3.5 million people died in the Madras presidency. 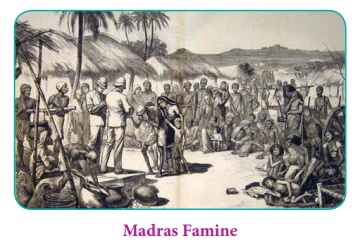 The introduction of plantation crops such as coffee, tea and sugar in Empire colonies such as Ceylon (Sri Lanka), Mauritius, Fiji, Malaya, the Caribbean islands, and South Africa required enormous labour. In 1815, the Governor of Madras received a communication from the Governor of Ceylon asking for “coolies” to work on the coffee plantations. The Madras Governor forwarded this letter to the collector of Thanjavur, who reported that the people were very much attached to the soil and unless some incentive was provided it was not easy to make them move out of their native soil. But the outbreak of two famines (1833 and 1843) forced the people, without any incentive from the government, to leave for Ceylon to work as coolies in coffee and tea plantations under the indentured labour system. The abolition of slavery in British India in 1843 also facilitated the processes of emigration to Empire colonies. In 1837 the number of immigrant Tamil labourers employed in Ceylon coffee estate was estimated at 10,000. The industry developed rapidly and so did the demand for Tamil labour. In 1846 its presence was estimated at 80,000 and in 1855 at 128,000 persons. In 1877, the famine year, there were nearly 380,000 Tamil labourers in Ceylon. 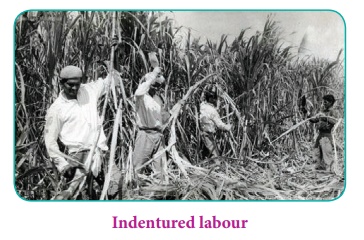 Besides Ceylon, many Indians opted to emigrate as indentured labour to other British colonies such as Mauritius, Straits Settlements, Caribbean islands, Trinidad, Fiji and South Africa. In 1843 it was officially reported that 30,218 male and 4,307 females had entered Mauritius as indentured labourers. By the end of the century some 5,00,000 labourers had moved from India to Mauritius.

Indentured Labour: Under this penal contract system (indenture), labourers were hired for a period of five years and they could return to their homeland with passage paid at the end. Many impoverished peasants and weavers went hoping to earn some money. It turned out to be as worse than slave labour. The colonial state allowed agents (kanganis) to trick or kidnap indigent landless labourers. The labourers suffered terribly on the long sea voyages and many died on the way. The percentage of deaths of indentured labour during 1856-57, in a ship bound for Trinidad from Kolkata is as follows: 12.3% of all males, 18.5% of the females, 28% of the boys 36% of the girls and 55% of the infants perished.