Naoroji and his Drain Theory

Dadabhai Naoroji, known as the ‘Grand Old Man of Indian Nationalism’, was a prominent early nationalist.

Naoroji and his Drain Theory

Dadabhai Naoroji, known as the ‘Grand Old Man of Indian Nationalism’, was a prominent early nationalist. He was elected to the Bombay Municipal Corporation and Town Council during the 1870s. Elected to the British Parliament in 1892, he founded the India Society (1865) and the East India Association (1866) in London. He was elected thrice as the President of the INC.

His major contribution to the Indian nationalist movement was his book Poverty and Un-British Rule of the British in India (1901). In this book, he put forward the concept of ‘drain of wealth’. He stated that in any country the tax raised would have been spent for the wellbeing of the people of that country. But in British India, taxes collected in India were spent for the welfare of England. Naoroji argued that India had exported an average of 13 million pounds worth of goods to Britain each year from 1835 to 1872 with no corresponding return. The goods were in lieu of payments for profits to Company shareholders living in Britain, guaranteed interest to investors in railways, pensions to retired officials and generals, interest for the money borrowed from England to meet war expenses for the British conquest of territories in India as well as outside India. All these, going in the name of Home Charges, Naoroji asserted, made up a loss of 30 million pounds a year. 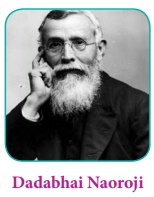