A sexually transmitted disease (STD) is a disease acquired through sexual contact with an infected person.

A sexually transmitted disease (STD) is a disease acquired through sexual contact with an infected person. Table 70-4 identifies dis-eases that can be classified as STDs. 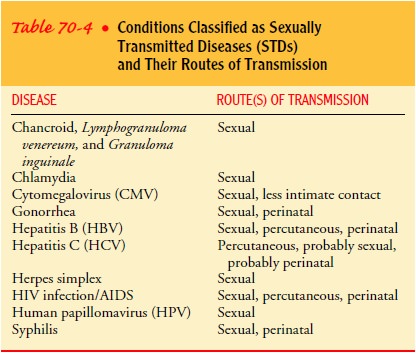 Other organisms can be transmitted during sexual contact, although they are generally not considered to be STDs. For example, G. lamblia, usually associated with contaminated water, can also be transmitted through sexual exposure.

STDs are the most common infectious diseases in the United States and are epidemic in most parts of the world (Chart 70-3). Portals of entry of STD microorganisms and sites of infection in-clude the skin and mucosal linings of the urethra, cervix, vagina, rectum, and oropharynx. 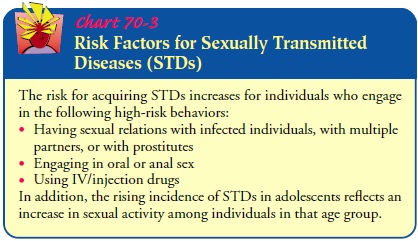 In June 2001, U.S. Surgeon General Satcher published a doc-ument entitled, The Surgeon Generalâ€™s Call to Action to PromoteSexual Health and Responsible Sexual Behavior. This documentdiscusses the public health impact of sexually transmitted diseases and other problems associated with lack of sexual responsibility.

The Surgeon General reports that approximately 12 million Americans become infected with an STD each year. He encour-ages educators and health care providers to study methods of in-fluencing irresponsible behavior and to provide education and services appropriate to the communities they serve (Satcher, 2001).

The use of a condom to provide a protective barrier from transmission of STD-related organisms has been broadly pro-moted, especially since the recognition of HIV/AIDS. At first re-ferred to as a method to ensure safe sex, the use of condoms has been shown to reduce but not eliminate the risk of transmission of HIV and other venereal diseases. The term safer sex more ap-propriately connotes the public health message to be used when promoting the use of condoms.

STDs provide a unique set of challenges for nurses, physicians, and public health officials. Because of perceived stigma and pos-sible threat to emotional relationships, those with symptoms of STDs are often reluctant to seek health care in a timely fashion. Similar to many other infectious diseases, STDs may progress without symptoms. A delay in diagnosis and treatment is poten-tially harmful because the risk of complications for the infected individual and the risk of transmission to others increase over time.