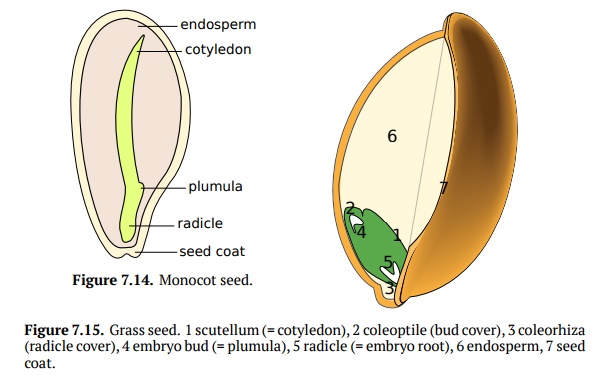 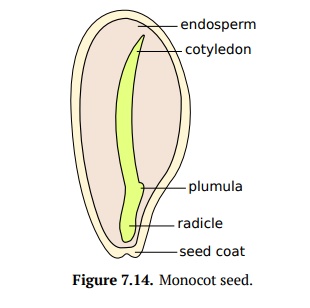 Beans (Phaseolus) and other Leguminosae are examples of seeds without endo-sperm—actually, it was there, but growing embryo usually eats it out completely. These seeds have two large cotyledons. Grass (Gramineae) seeds contain several specific organs, namely coleoptile, coleorhiza, and scutellum. The scutellum is an enlarged cotyledon, coleoptile is the bud cover, and coleorhiza covers the em-bryonic root, radicle (Fig. 7.15). Onion and grasses are monocots with lateral embryonic bud. Other seed plants have a terminal embryonic bud and two or multiple cotyledons. Pine (Pinus) is an example of a plant that has multiple (five or more) cotyledons. Some plants like orchids (Orchidaceae) do not have de-veloped embryo and even endosperm in seeds, their germination depends on a presence of symbiotic (mycorrhizal) fungus. 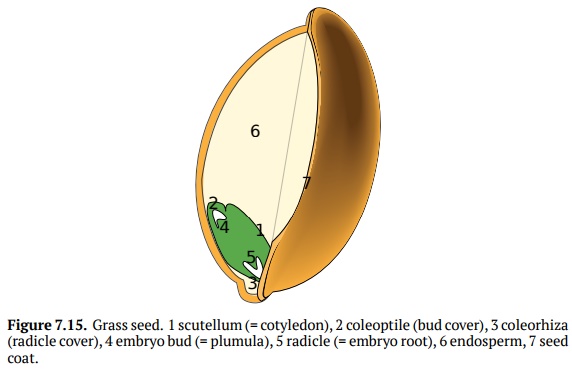 The first step in germination and starts with the uptake of water, also known as imbition. After imbition, enzymes are activated that start to break down starchinto sugars consumed by embryo. The first indication that germination has be-gun is a swelling in the radicle. In onion and pea (Pisum), a structure that looks like a hook goes up through the soil and expose cotyledons and both hypocotyl and epicotyl (first internode). In beans, grasses, and palms, only epicotyl is ex-posed aboveground whereas cotyledons and hypocotyl remain underground.