In many seed plants, secondary growth begins in their first year within the stem and continues on for many more years. These plants are classified as woody. They develop secondary tissues like periderm and wood, and even tertiary struc-tures like bark.

In many seed plants, secondary growth begins in their first year within the stem and continues on for many more years. These plants are classified as woody. They develop secondary tissues like periderm and wood, and even tertiary struc-tures like bark. 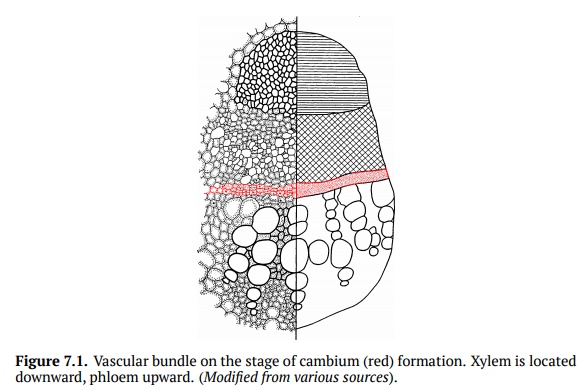 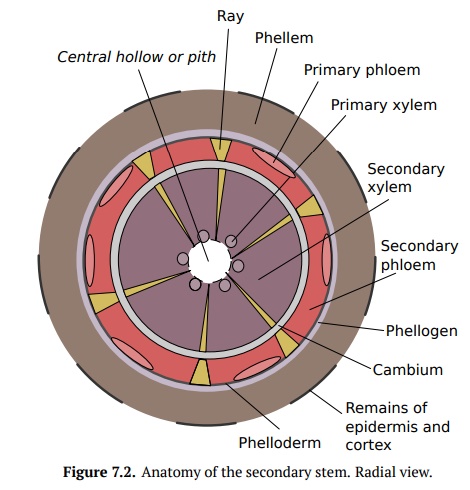 Most of cambium cells are fusiform initials forming axial vessel elements, while some cambium cells are ray initials and they form rays: combinations of paren-chyma cells and tracheids transporting water and minerals horizontally. Rays are visible best on the tangential section of the stem (when section plane is tan-gent to the stem surface); two other possible sections (radial and transverse) show axial components of the stem better. In the secondary phloem, rays are sometimes dilated (wedge-shaped). 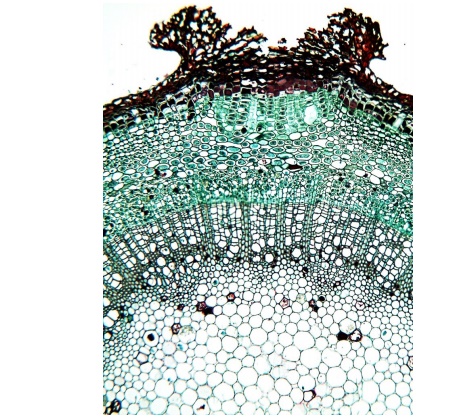 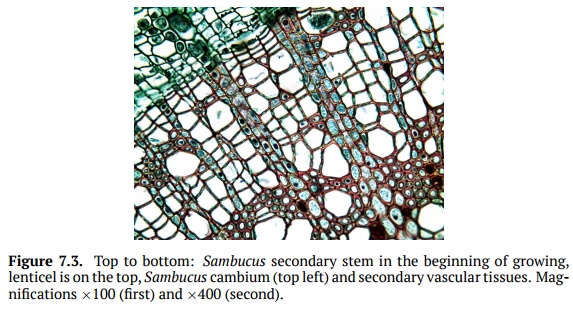 The cambium does not work evenly. In temperate climates, a ring forms for each growing season and makes it possible to determine the age by counting the growth rings. This is because at the end of season cambium makes much smaller (“darker”) tracheary elements. Trees growing in climates without well-expressed seasons will not make annual rings. To tell the age of a tree, re-searchers observe the number and thickness of annual rings that are formed. This is called dendrochronology.

Vesselless wood of conifers is of a simpler structure with relatively few cell types. There are simple rays and frequently resin ducts; resin is secreted by specialized cells.

In the tree trunk, the lighter wood near the periphery is called sapwood and has functioning xylem where most of the water and minerals are transported. 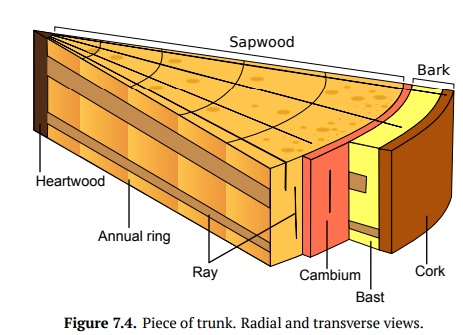 Darker wood closer to the center is called heartwood and is a non-functional, darkly colored xylem (Fig. 7.4). Tracheary elements are dead cells and to block them, plants uses tyloses which also help control winter functioning of vessels. A tylose forms when a cell wall of parenchyma grows through a pit or opening into the tracheary element; they look like bubbles.

Most liliids (for example, palms) do not have lateral meristems and true wood. Some thickening does occur in a palm but this happens at the base of the tree, as a result of adventitious roots growing. Palms may also have diffuse secondary growth which is division and enlargement of some parenchyma cells. These pro-cesses do not compensate the overall growth of plant, and palms frequently are thicker on the top than on the bottom. Few other liliids (like dragon blood tree, Dracaena) haveanomalous secondary growthwhich employs cambium butthis cambium does not form the stable ring.

Bark is everything outside vascular cambium. It is unique structure which is some-times called “tertiary tissue” because it consists of primary and secondary tissues together:

Each year, a new layer of phellogen (cork cambium) appears from the parenchy-ma cells of the secondary phloem which makes bark multi-layered and uneven. On the surface of a young stem, one may see lenticels, openings in phellem layer which supply the internals of the stem with oxygen. To produce lenticels, some phellogen cells divide and grow much faster which will finally break the periderm open.

Apart from the lenticels, older or winter stems have leaf scars with leaf traces on their surface. The first are places where leaf petiole was attached, and the second are places where vascular bundles entered the leaf.