Seed development: Stage I of seed development produces the radicle, which gives rise to the root, and the plumule, giving the shoot and cotyledons. Stage II involves maturation, post-abscission and desiccation.

Stage I of seed development produces the radicle, which gives rise to the root, and the plumule, giving the shoot and cotyledons. Stage II involves maturation, post-abscission and desiccation.

Dormancy may be due to the barrier to water and oxygen presented by the seed coat or to abscisic acid produced by the embryo. Breaking dormancy may require low temperature (vernalization), light or darkness.

Germination begins with water absorption (imbibition). Next, the seed food reserves are mobilized. In grasses, the starch in the endosperm is broken down by enzymes synthesized in the aleurone layer in response to gibberellic acid from the embryo. Production of a photosynthetic apparatus involves: Phase I, cell division and division of etioplasts;

The first stage of seed development generates the major organs of the embryo: a radicle that gives rise to the root, and the plumule that gives rise to the shoot and cotyledons. Once these are formed, cell division stops and the second stage of seed development begins. This results in the formation of a seed capable of protecting the embryo and supplying its food until germination has taken place and a viable seedling has been established.

The next stage of seed development involves three phases: maturation, postabscission and desiccation (Table 1). Genetic analysis of mutants of seed developmentin arabidopsis indicates that regulation of the events in the different phases is complex, with a number of genes being involved. One, abi3,is involved in sensitivity to abscisic acid (ABA) as, when mutated, the plant is ABA-insensitive. It is only expressed in the seed and it controls expression of some of the genes of the maturation and post-abscission stages. abi3 mutants  erminate on the mother plant and do not undergo desiccation. Other mutants are also known that result in this type of early (precocious) germination. These include fus3 mutants of arabidopsis which have cotyledons which develop to be like the primordia of true leaves and which do not synthesize seed storage proteins.

For a seed to be successful, the embryo must be inactive until after it has separated from its parent. For many species, it must also remain inactive (dormant) until after a period of harsh conditions such as cold or drought has passed. As the embryo is complete well before the seed is shed it will germinate if removed from the seed. Dormancy mechanisms ensure it remains inactive until an appropriate time. Species vary in the length of this embryo inactivity. In some species, removal of the seed coat permits germination, and dormancy is due to lack of oxygen and water for the embryo. In others, dormancy remains even if the coat is removed. In these, the dormancy regulator is ABA, produced by the embryo during the late stages of seed maturation . Dormancy may be broken by a variety of means, depending on the type of seed dormancy present. Coat-imposed dormancy may be ended by removal of external layers by microbes or even passage through an animal’s gut. In other seeds, breaking dormancy may require a period of low temperature (vernalization), light or darkness.

The first stage of germination is imbibition, in which the seed takes up water. Next, seed storage reserves are mobilized and the embryo grows. Mobilization of food reserves varies depending on the nature of the major reserves of the seed. The process has been studied in detail in barley. 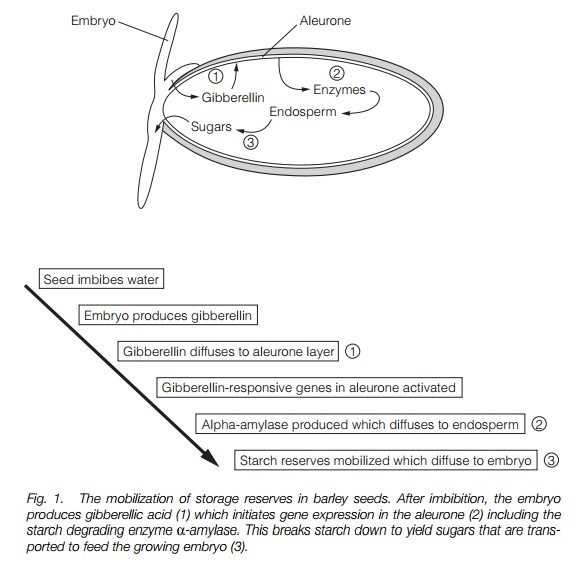 After emergence of the seedling, the shoot can photosynthesize and supply the nutrients required for growth. Production of a fully functional photosynthetic apparatus (described for a grass) occurs in three phases.

Phase I. The coleoptile  and primary leaf (plumule) contain etioplasts (precursors of chloroplasts which cannot photosynthesize; Topic B3). Inphase I, the meristematic cells of the leaf divide together with the etioplasts within them. In phase II, cell division ceases, but plastids go on dividing and increase in abundance. Genes are activated which generate the photosynthetic apparatus  and enzymes of the Calvin cycle . This involves activity of genes of both the plastid genome (plastome) and nuclear genome and the efficiency of the photosynthetic system increases as more components are added. In phase III, the activity of the photosynthetic apparatus is maintained, and damage repaired. Finally, the apparatus begins to senesce and efficiency is lost.