Water is polar and a good solvent for charged or polar solutes. Hydrogen bonding means water is a liquid at temperatures common for plant growth and has high cohesive (tensile) strength.

Water is polar and a good solvent for charged or polar solutes. Hydrogen bonding means water is a liquid at temperatures common for plant growth and has high cohesive (tensile) strength.

Water moves from high water potential to low water potential. Water movement occurs by diffusion and by mass flow, where flow rate depends on the cross-sectional area of the tube, the pressure gradient and the viscosity of the liquid. Embolism may block flow. Water potential is the sum of the pressure potential and the osmotic potential. A cell generating a positive hydrostatic pressure is turgid; one in which it is negative is flaccid.

The cohesion-tension theory suggests that water is drawn upwards through the xylem by tension created by transpiration at the leaves. Root pressure and capillary action contribute.

Water predominantly enters roots largely via root hairs. Water transport may be apoplastic or symplastic (transcellular via plasmodesmata, or transmembrane via membrane transporters). At the endodermis, water movement must be cytoplasmic. Water enters the xylem as a result of the low water potential generated by the transpiration stream.

Water is essential for plant growth. All cells contain water as the solvent in which biochemical reactions take place and in which cell structures are maintained. Water shows hydrogen bonding (between electronegative oxygen and electropositive hydrogen) which means it is a liquid at temperatures common for plant growth. As it is polar, it is a good solvent for polar molecules like ions and charged organic molecules. The strong forces between water molecules (cohesion) give it several other key properties: it has a very high surface tension and adheres strongly to surfaces. It also has a high tensile strength, and is able to form columns under high tensions without breaking, for example in xylem.

Movement of water through xylem is largely by bulk flow that occurs as a response to a pressure gradient. Fluid flow through a pipe depends on the pressure gradient between the ends of the pipe, the radius of the pipe and the viscosity of the fluid. As the radius doubles, the flow rate increases by a factor of 24 (16); therefore, flow in larger pipes can be much faster than in small ones. Larger pipes are much more susceptible to embolism and cavitation, the formation of air bubbles and the break-up of the water column. This occurs as the pressure gradient is provided by a tension, a force drawing from above, rather than a pressure below.

Water entering a cell will result in an increase in volume. If the cell wall stops that volume increase, the hydrostatic pressure will increase. Eventually, the positivehydrostatic pressure equals the negative osmotic potential and the water potential of the cell reduces to zero (i.e. yω =0on both sides of the membrane). At this point there is no net movement of water into or out of the cell.

The movement of water across cell membranes is limited by its low solubility in the lipid bilayer. Aquaporins are proteins which permit water to cross a membrane. Their regulation is likely to be important in regulating water potential. 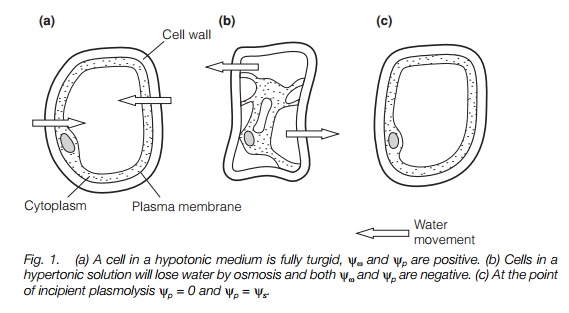 Transpiration is the process by which water is drawn from the soil through the plant as a result of evaporation from the leaves. Surfaces exposed to the air are generally covered with a layer which resists water loss . Stomata in the leaf surface permit water loss by evaporation from the leaf . Most transpiration (90–95%) occurs through these pores. The rate of transpiration increases with temperature and with wind speed. Changing the stomatal aperture  varies the rate of water loss in changing environmental conditions.

The water-conducting tissue of the plant is the xylem. It is made up of elongated cells with walls thickened and strengthened by secondary wall deposits. Its structure is given in detail in Topic C1. Three possible driving forces exist for water flow in the xylem:root pressure, capillary action and cohesion-tension (in which a column of water is drawn up from the soil by forces generated by evaporation at the leaf surface).

When the stem of a plant is cut, xylem fluid often exudes from the cut. This exudation is driven by root pressure. It occurs where accumulated solutes in the xylem cause the influx of water into the xylem by osmosis. The suberinized endodermal layer prevents back-flow of water and a hydrostatic pressure is generated, causing water movement. Root pressure is insufficient to explain water movement to the upper leaves of a tall tree and is not observed in all plants. It is therefore unlikely to be the major cause of xylem water flow.

Capillary action is generated by the adhesive forces between the surface tension in the meniscus of water and the wall of a tube. While capillary effects occur, the total elevation of water achieved by capillaries of a diameter typical of xylem elements are less than a meter, insufficient to explain water transport to the top of a tall tree.

Cohesion-tension explains water flow through large plants. The driving force is provided at the leaf, where evaporation generatestension (negative pressure, or ‘suction’). This is particularly strong where the water surface bridges microscopic 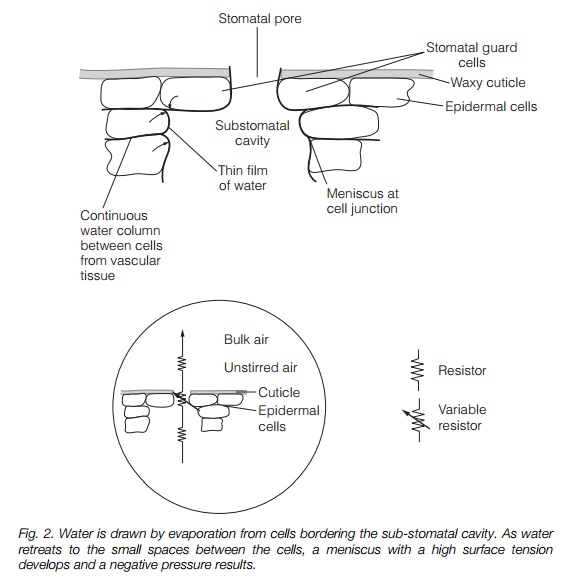 gaps, for instance at the junction of two mesophyll cells (Fig. 2). Evaporation from the surface of the leaf causes the water to retreat to microscopic pores in these cell wall junctions, where it adheres to hydrophilic wall components. Cohesion of the water molecules (surface tension) results in the formation of a concave meniscus. This is pulled by adhesion and cohesion, of water molecules to the walls and of water molecules to each other, generating a negative pressure. A meniscus drawn into a pore of radius 0.01 m has a tension of –15 mPa, more than sufficient to explain water movement from the soil. The leaf water is in a continuous column running through the xylem to the root. The whole water column is therefore under tension and water is drawn upwards from the soil. This places the column under considerable tension; in a 100 m tree, a force of up to –3.0 MPa is present. A gasfree water column can withstand a tension about 10 times this; however, the presence of dissolved gas greatly reduces this as embolisms (gas bubbles) form. Damage due to embolisms is minimized as the xylem is divided into many small pipes, with interconnections via pits (see above).Figure 3 illustrates the action of pits and perforation plates in containing an embolism.

In most plants, water uptake occurs predominantly through root hairs, fine, extensions of single epidermal cells that enter the water film on soil particles (Fig. 4). They provide a very large surface area for absorption. Mycorrhizal fungi may also fulfill this function . The internal anatomy of the root is also 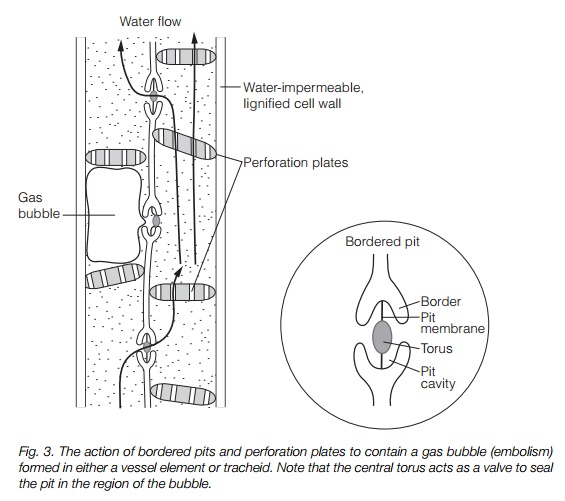 important. The xylem and endodermis (a water-impermeable cell layer with suberinized cell walls, through which water movement must be symplastic; Topic C2) develops some distance behind the root tip. Water flows either through the cell wall spaces (theapoplast) or through the cell contents (the symplast). Water may be taken up from, or lost to, the apoplast by any cell in the pathway. Movement of a water molecule across the root involving both pathways is termed transcellular transport.