Movement of nutrient ions across membranes in plant

Mineral nutrients are transported as ions. They are soluble in water but cannot cross membranes without the presence of transport proteins.

MOVEMENT OF NUTRIENT IONS ACROSS MEMBRANES

Transport of nutrients into cells

Mineral nutrients are transported as ions. They are soluble in water but cannot cross membranes without the presence of transport proteins. This transport is coupled to the transport of protons (H+), which are pumped actively across the membrane by the activity of primary pumps using adenosine triphosphate (ATP) as energy source.

Advances in understanding membrane transport have been made by use of membrane vesicles and radioactive isotopes, by electrophysiology and by molecular techniques. The identity of many nutrient transport proteins is now known.

There are two major primary ion pumps in plant cells: the plasma membrane proton pump, which uses ATP as energy source and pumps H+ out of the cell; and the vacuolar (or tonoplast) proton pump which pumps H+ into the vacuole. Both pumps are electrogenic (generate a membrane potential). The apoplast and vacuole are therefore more acidic than the cytoplasm. Other primary pumps exist for calcium and the vacuole contains a second proton pump using pyrophosphate as energy source.

Ion channels permit nutrient ions to move across membranes driven by the electrochemical gradient. Channels are gated (they open and close) in response to changes in membrane potential (voltage gated channel), binding signal or other molecules (ligand gated channel) or tension at the membrane (stretch activated channels).

Transport of nutrients into cells

Membranes are impermeable to charged molecules and large molecules that are polar (have a charge imbalance). As mineral nutrient ions are charged, they cannot cross cell membranes without the action of specific membrane proteins. These proteins fall into three categories: primary pumps, which use the energy of adenosine triphosphate (ATP) to transport ions actively; secondarily-coupledtransporters, which couple the movement of one ion to that of another; and channels that permit the passive movement of ions. Transport of most ions is coupled to the transport of protons (H+), which are pumped actively across the membrane by the activity of primary pumps using ATP as energy source. The action of the transport proteins is tightly regulated and they are specific for given nutrients. They provide selectivity and specificity of uptake and, together with the properties of membranes, result in the concentration of nutrients within a cell or tissue being different from that outside it.

Movement of nutrient ions into and out of a cell, or subcellular compartment, is driven by a combination of concentration and electrical effects at any membrane (the electrochemical gradient). The force driving an ion across a membrane is made up of two parts, an electrical driving force, and a chemical driving force. The two forces are balanced (equal and opposite) at equilibrium, when no net movement of the ion occurs across the membrane. Plant cells generally maintain a membrane potential of –120 to –200 mV at the plasma membrane as a result of the action of primary proton pumps. This electrical driving force is used to maintain the required concentration of anions and cations on each side of the membrane. Figure 1 illustrates the key transporters for ions in a typical plant cell. 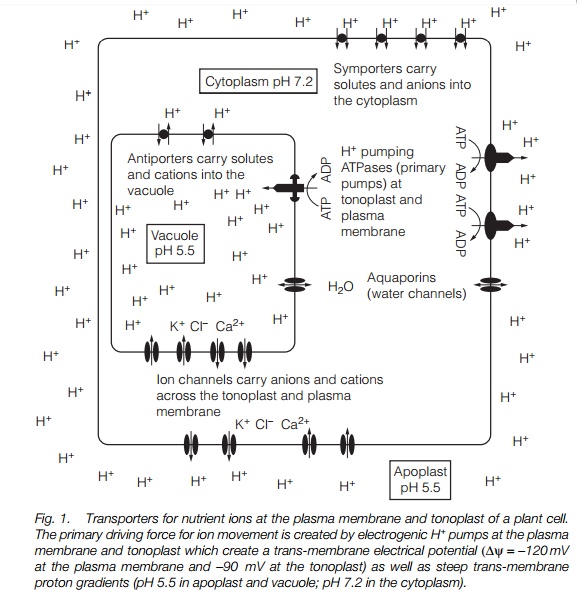 The transport of an ion across plant membranes was first investigated using radioactive isotopes and membrane vesicles, sealed spheres of membrane which are formed when membranes are purified. The properties of many transporters have been determined by these methods.

The technique of patch clamping (Fig. 2) permits the transport properties of single proteins in the membrane to be assayed. A small piece of membrane (patch) is attached to the tip of a fine pipette and sealed to it by gentle suction.

By measuring currents flowing through the membrane, the activity and properties of ion channels can be described.

Advances in describing nutrient transporters have resulted from cloning transport proteins. The overall structures of membrane proteins have been established and the role of regions of the protein investigated by altering key amino acids and expressing them in foreign host cells, like yeast cells, or giant egg cells of the African frog Xenopus laevis. Use of mutants has also been important; for instance, the nitrate transporter CHL1 was identified using an arabidopsis mutant chl1 that is insensitive to chlorate, an inhibitor of the transport of nitrate. Finally, new membrane transport proteins have been detected by studies based on their homology with known ion transporters from other organisms.

The primary pumps of plant cell membranes are proton (H+) pumps, located at the plasma membrane and vacuolar membrane (tonoplast). The plasma membrane proton pump uses ATP as substrate and expels H+ from the cell. The process generates an electrical gradient of about –120 mV across the membrane. The tonoplast has two primary pumps: an adenosine triphosphatase (ATPase) and a pyrophosphatase (which uses pyrophosphate rather than ATP as substrate) which pump H+ into the vacuole. These pumps generate a membrane potential across the tonoplast of about –90 mV. The transport of all other nutrient ions except Ca2+ depends on these electrochemical gradients. Ca2+ concentrations are regulated by active Ca2+ pumps. 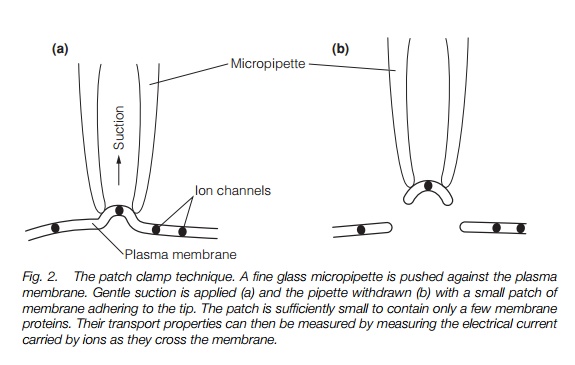 Some transport proteins permit the passive movement of nutrients across membranes driven by the electrochemical gradient for that nutrient. These passive transporters are also membrane proteins and are known as uniporters.

Ion channels are a specialized type of uniporter; they generally show a high degree of selectivity for individual ions and are gated (can either open to permit ions to cross the membrane or close to prevent them from crossing). Channels may be gated by the membrane potential (voltage gated), by signal molecules within the cell (ligand gated) and by tension in the membrane (stretchactivated). The combination of these properties permits very close regulation of ionic concentration within the cytoplasm or vacuole.