Plant Self incompatibility and its Types

In many hermaphrodite and monoecious plants there is a physiological self-incompatibility (SI) in which a plant’s own pollen is rejected. There are several systems involving differences in the sites of recognition and in genetics. The carpel recognizes either the growing pollen tube (gametophytic recognition) or the pollen surface (sporophytic recognition).

In the commonest system, incompatible pollen tubes burst in the style. The recognition is controlled by one locus with many ‘S’ alleles. In the grasses the pollen tube is blocked at the stigma surface with pectins and callose. Alleles at both loci need to be the same for an incompatible reaction.

One sporophytic system has a single locus with many S alleles, but the genetics may be complex involving dominance hierarchies. The pollen is inhibited from germinating or the tube is blocked before penetration.

Heteromorphic systems involve two or three different forms of flower with differences in pollen and stigma structure and usually differences in style and stamen length. Pollen–stigma interaction may differ but each form can cross only with other forms. The system involves one or twomloci each with two alleles.

This is a little known group of SI systems in which the pollen tube reaches the ovule but the ovule aborts. It may involve sporophytic or gametophytic recognition or a combination of both.

In gametophytic SI, glycoproteins with ribonuclease activity are produced by the S gene, perhaps disabling RNA at the pollen tube tip. In the grass system, wall formation is inhibited by glycoproteins. In sporophytic SI, two linked loci produce glycoprotein and a kinase that disable each other.

Many hermaphrodite and monoecious plants have a physiological self-incompatibility (SI) system involving an interaction between the pollen and the carpel which prevents seeds forming or maturing as a result of self-fertilization . These interactions all involve the ability of the carpel to recognize and reject its own pollen and accept pollen from a different plant. The site of recognition and the mechanisms vary widely within plants (Table 1) but the main interaction is known as either gametophytic or sporophytic (Fig. 1). In a gametophytic interaction, the pollen germinates and the growing pollen tube is recognized by the female plant, normally in the style. Since a pollen grain is the result 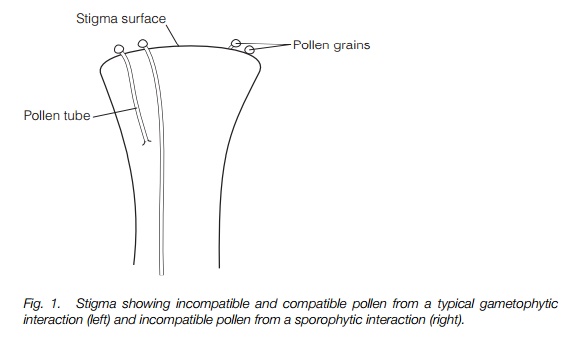 of meiosis, it has a single set of chromosomes and it is this that is recognized. In a sporophytic interaction, the surface of the pollen grain is recognized, normally by the stigma. The pollen surface is impregnated with the anther tapetum before being shed  and it is this coating, derived from the parent plant and with both sets of parental chromosomes, that is recognized. The terms ‘gametophytic’ and ‘sporophytic’ are used to indicate the origins of the structures . In all SI systems the controlling genes are known as S genes.

In the grasses (and possibly some members of the nightshade family, Solanaceae) the germinating pollen tube is blocked before it penetrates the stigma or just as it starts. Incompatible pollen is blocked initially by pectins followed by callose deposition. Two gene loci are involved and only if the alleles at both loci in the pollen are the same as two of the alleles in the female parent is the incompatibility reaction triggered. The number of alleles at each locus is probably 6–20, smaller than in the single-locus system, but the two independent loci allow for more compatible pollinations.

There are other rather ill-defined gametophytic systems with two or more loci, often giving partial self-incompatibility.

Two large unrelated families, the cabbage family and the daisy family, Brassicaceae and Asteraceae, respectively, and a few other unrelated plants in at least three more families show a sporophytic interaction (Table 1) with a mode of action similar to that of the grasses. One gene locus is involved but genetic control is more complex than in gametophytic systems and there is some variation in the response, although a plant’s own pollen is always stopped. The number of S alleles is similar to that in gametophytic systems but some have a dominance hierarchy.

Heteromorphic systems (Table 1) mainly have sporophytic recognition and the system occurs in widely scattered plant families. In this SI system, the flowers of different plants usually take one of two or three different forms and the site of recognition can differ between the forms of one species. The dimorphic type has one form with a short style and long stamens and the other with a long style and short stamens (Fig. 2). In trimorphic plants there are three different style lengths with stamens occupying the other two sizes in each plant. In most heteromorphic plants the stigmas of the different morphs have different surface textures and the pollen may be of different size or sculpturing or both. In dimorphic systems each plant can cross only with a plant with the other type of flower, or either of the other types in trimorphic systems. 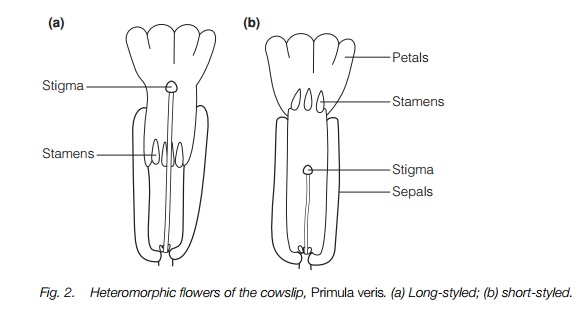 In some self-incompatible plants the pollen tube reaches the ovule but the ovule aborts, either because fertilization fails or because the ovule aborts at an early stage after fertilization. The recognition, the mechanisms and the genetics are not well understood. Both gametophytic and sporophytic recognition probably occur in different groups and there may be both types within one species. The production of weak offspring as a result of selfing,inbreeding depression, may be hard to distinguish from late-acting SI systems. Some form of late-acting system is known from 16 families.

The S gene of arabidopsis  and other plants have been cloned and been shown to produce a glycoprotein with ribonuclease (RNase) activity. In gametophytic recognition, ribosomal RNA at the tip of the pollen tube is probably recognized by this protein in the style and disabled. As the pollen tube grows, enzymes from the tube digest the stylar tissue providing a path and this may activate the RNase. The mechanism is still not clear but some form of nucleic acid–enzyme recognition seems likely. In the grass system it is likely that the S allele glycoprotein interacts with carbohydrates at the pollen tube tip. This interferes with the extension of microfibrils of carbohydrate that would normally occur to make the pollen tube wall. The precursors of these wall molecules, microfibrillar pectins, then accumulate and block the tube.

In the sporophytic SI system of the cabbage family, the S gene is actually two linked loci, one producing a glycoprotein and the other a receptor kinase. These are structurally similar and are expressed on both the stigma surface and the surface of the pollen grain. If the kinase is disabled there is no incompatibility reaction so it must involve some interaction between the two proteins. Pollen grains in sporophytic SI hydrate by enzymic breakdown of cells on the stigma surface and this stage may be inhibited, so that pollen germination is stopped through insufficient hydration. In wet or very humid conditions more incompatible pollen germinates, but this is stopped from penetrating, so the interaction is clearly not confined to germination.