Most plants are hermaphrodite and they may cross or self-fertilize. Others have unisexual flowers either on the same plant (monoecious), or separate plants (dioecious), and others are intermediate or variable. A few are asexual.

Most plants are hermaphrodite and they may cross or self-fertilize. Others have unisexual flowers either on the same plant (monoecious), or separate plants (dioecious), and others are intermediate or variable. A few are asexual.

Many plants have a self-incompatibility system stopping self fertilization, but others are self-fertile. Early maturation of flowers can lead to selffertility. Some species are partially self-incompatible.

Cross-pollination is favored by a separation of fertile organs in the flower. Stamens may mature before carpels, known as protandry, or after, protogyny. Protandry is common in specialized insect-pollinated flowers in inflorescences and protogyny is associated with wind pollination and unspecialized flowers. Stamens and carpels may be separated spatially.

A few plants have bulbils in place of some or all flowers and others produce seeds without any fertilization. These are often polyploids derived from hybridization between sexual species and many of these clones have spread.

Floral development genes and hormones affect sex expression in all plants, but in dioecious species there is a chromosomal XX/XY system too, sometimes overridden in polyploids. There is an interaction with environmental conditions and sex expression can vary in plants with unisexual flowers.

Most flowering plant species bear hermaphrodite flowers with functional stamens and carpels. Some of these are almost entirely cross-fertilized, some mainly self-fertilized (see below). Other plants bear unisexual flowers, with only stamens or carpels functional, and others reproduce asexually. These have different implications as breeding systems (Table 1;). Breeding systems are flexible in plants, e.g. in populations of many hermaphrodite species occasional individuals produce no viable pollen; individuals of dioecious species sometimes produce flowers of the opposite sex. A few species have a mixture of hermaphrodite, male and female plants.

In hermaphrodite and monoecious species, there is the potential for selfpollination leading to self-fertilization (selfing) unless there is a mechanismto avoid it. The commonest form of inhibition of selfing is some form of physiological self-incompatibility (SI) system. In most plants with an SI system that have been extensively studied, a few individual plants have been shown to be self-compatible, showing that there is always the potential for self-compatible individuals to spread if cross-pollination fails in the long term. SI systems do not work if the stigma is pollinated experimentally when the flower is still in bud (allowing easy study of the system). Situations favoring a quick life cycle, such as agricultural land, have probably led to the evolution of selfing many times, since rapid development and early maturation of the stamens or early opening of the flower (Fig. 2) may allow self-fertilization before the SI system becomes operational. These plants will have smaller flowers than self-incompatible relatives.

Some plants are partially self-incompatible, with a plant’s own pollen growing more slowly than that from another individual, allowing for self-fertilization if there is no cross-pollination. In general it seems that many hermaphrodite species are flexible in their degree of outbreeding and, among flowering plants, there is a whole range from nearly 100% outbreeding to nearly 100% inbreeding. In a few plants self-fertilized seeds have slightly different properties from cross-fertilized seeds (e.g. larger and with a softer testa). 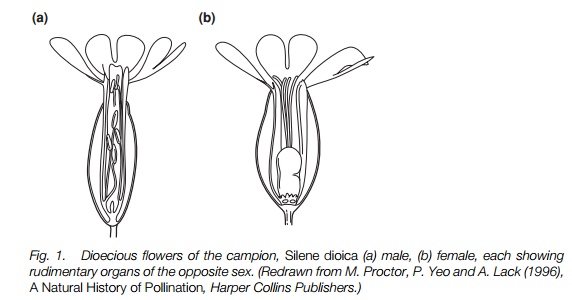 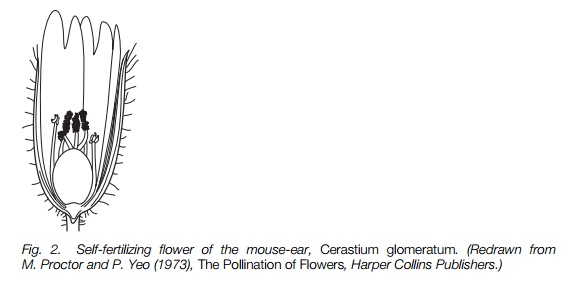 Many species with an SI system, and some without one, separate stamens from stigmas either temporally, one maturing before the other, or spatially. This will favor the dispersal of pollen to other flowers, important in self-incompatible species because the stigma can otherwise become clogged with a plant’s own incompatible pollen. Cross-fertilization will be more likely in self-compatible species. If the stamens mature before the carpels the plant is known as protandrous; if the carpels mature first, protogynous. Protogyny is common among some unspecialized insect-pollinated flowers and in wind-pollinated plants, whereas protandry is a common feature of the more specialized insect-pollinated flowers. Protandry is a feature of plants that bear their flowers in inflorescences in which the insects visit the older flowers first, e.g. spikes of flowers that mature from the base upwards, or composite inflorescences maturing from the outside inwards. In protogyny and protandry there may be overlap in function between the sexes allowing for self-pollination if cross-pollination fails.

The floral organs may be separated spatially within the flower. Some flowers have their parts separated, often by a small distance, and rely on visitors crawling around the flower for pollen to reach the stigmas. Some others have parts that move as they mature or in response to insect visits; in these a spatial separation can be combined with a temporal separation. After a flower has been open for a time the anthers and stigmas may come together allowing selfing if there has been no cross-pollination.

Many plants can spread by vegetative means, with rhizomes, root or stem fragments, etc., not involving floral structures. These reproduce sexually with flowers as well. A few plants have bulbils in place of some or all of their flowers. These resemble tiny bulbs (Fig. 3) or plants and are clones of the parent plant. A few plant groups produce seeds that are formed without any fertilization of the embryo, so again they are clones of the parent plant. This is particularly associated with members of the rose family (Rosaceae) such as the brambles (Rubus) and composites (Asteraceae) such as the dandelions (Taraxacum). These agamospermous plants are nearly all high polyploids, often with odd numbers of chromosomes, derived by hybridization from sexual diploids in the center of 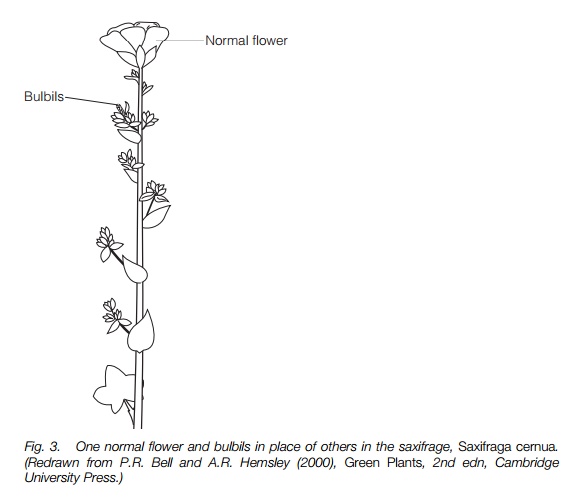 the range of the genus. Numerous different agamospermous clones, differing in minor ways, have appeared and these present a problem of classification, each clone sometimes being described as a separate species.

In hermaphrodite flowers sex expression is controlled by floral development genes . In unisexual flowers some of the same genes are likely to be present and their expression is subject to hormonal and genetic control.

Dioecious plants normally have identifiable sex chromosomes with an XX/XY system, XX normally but not always being the female. In some dioecious plants the Y chromosome is visually distinct from the X. This works for diploid plants, but numerous plant species are polyploid and must therefore have multiple sex chromosomes. Many of these polyploids are hermaphrodite even if the diploid is dioecious, although this is not always so. In some, the Y genes seem to override expression of X genes even if there is only one Y and several X chromosomes, and the polyploids remain dioecious.

In some dioecious species, such as willows, sex expression never varies, but in others production of male and female flowers can be influenced by environmental conditions, and hormonal expression within the plant interacts with the genetic makeup. This can make genetically male plants produce female flowers and vice versa. Auxin levels  differ along a shoot and affect which flowers grow, the auxin levels themselves being affected by day length, temperature and quantity and quality of light. In monoecious species, male flowers are usually produced nearer the tip of a shoot than female flowers, this being related to the levels of auxins and other hormones.