The expression for the torque of the induction machine is dependent on the rotor resistance.

Note that while the maximum torque and synchronous speed remain constant, the slip at which maximum torque occurs increases with increase in rotor resistance, and so does the starting torque. Whether the load is of constant torque type or fan-type, it is evident that the speed control range is more with this method. Further, rotor resistance control could also be used as a means of generating high starting torque. 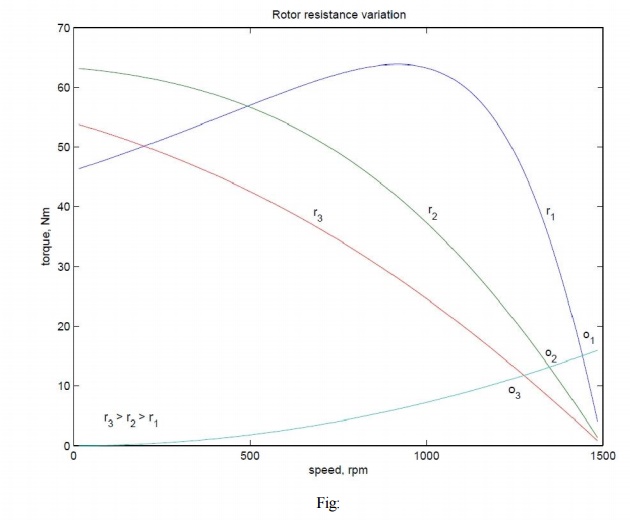 For all its advantages, the scheme has two serious drawbacks. Firstly, in order to vary the rotor resistance, it is necessary to connect external variable resistors (winding resistance itself cannot be changed). This, therefore necessitates a slip-ring machine, since only in that case rotor terminals are available outside. For cage rotor machines, there are no rotor terminals. Secondly, the method is not very efficient since the additional resistance and operation at high slips entails dissipation.

The resistors connected to the slip-ring brushes should have good power dissipation capability. Water based rheostats may be used for this. A 'solid-state' alternative to a rheostat is a chopper controlled resistance where the duty ratio control of the chopper presents a variable resistance load to the rotor of the induction machine.