When a squirrel cage induction motor is energized from a three phase power system and is mechanically driven above its synchronous speed it will deliver power to the system. An induction generator receives its excitation (magnetizing current) from the system to which it is connected. It consumes rather than supplies reactive power (KVAR) and supplies only real power (KW) to the system. The KVAR required by the induction generator plus the KVAR requirements of all other loads on the system must be supplied from synchronous generators or static capacitors on the system. 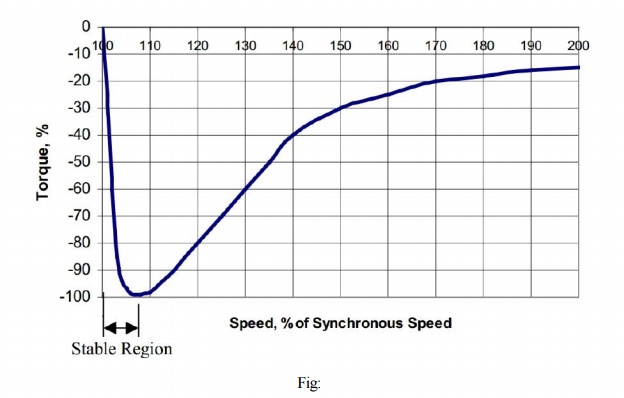 Now for example, a 3600 RPM squirrel cage induction motor which delivers full load output at 3550 RPM as a motor will deliver full rated power as a generator at 3650 RPM. If the half-load motor speed is 3570 RPM, the output as a generator will be one-half of rated value when driven at 3630 RPM, etc. Since the induction generator is actually an induction motor being driven by a prime mover, it has several advantages.

1. It is less expensive and more readily available than a synchronous generator.

2. It does not require a DC field excitation voltage.

3. It automatically synchronizes with the power system, so its controls are simpler and less expensive.

The principal disadvantages of an induction generator are listed below

1. It is not suitable for separate, isolated operation

2. It consumes rather than supplies magnetizing KVAR

3. It cannot contribute to the maintenance of system voltage levels (this is left entirely to the synchronous generators or capacitors)

4. In general it has a lower efficiency.

As energy costs so high, energy recovery became an important part of the economics of most industrial processes. The induction generator is ideal for such applications because it requires very little in the way of control system or maintenance.

Because of their simplicity and small size per kilowatt of output power, induction generators are also favoured very strongly for small windmills. Many commercial windmills are designed to operate in parallel with large power systems, supplying a fraction of the customer's total power needs. In such operation, the power system can be relied on for voltage & frequency control, and static capacitors can be used for power-factor correction.