A joint of an industrial robot is similar to a joint in the human body: It provides relative motion between two parts of the body. Each joint, or axis as it is sometimes called, provides the robot with a so called degree-of-freedom (d.o.f.) of motion. In nearly all cases, only one degree of freedom is associated with a joint. Robots are often classified according to the total number of degrees-of-freedom they possess. Connected to each joint are two links, an input link and an output link. Links are the rigid components of the robot manipulator. The purpose of the joint is to provide controlled relative movement between the input link and the output link.

Most robots are mounted on a stationary base on the floor. Let us refer to that base and its connection to the first joint as link 0.1t is the input link to joint 1, the first in the series of joints used in the construction of the robot. The output link of joint 1 is link 1. Link 1 is the input link to joint 2, whose output link is link 2, and so forth. This joint-link numbering scheme is illustrated in Figure 7.1.

Linear joint (type L-joint).The relative movement between the input link and the output link is a translational sliding motion, with the axes of the two links being parallel.

Orthogonal Joint (type U joint). This is also a translational sliding motion, but the input and output links are perpendicular to each other during the move. 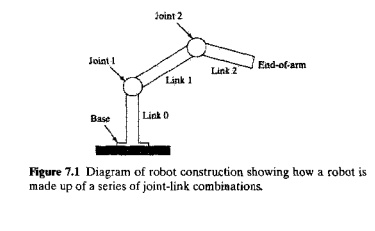 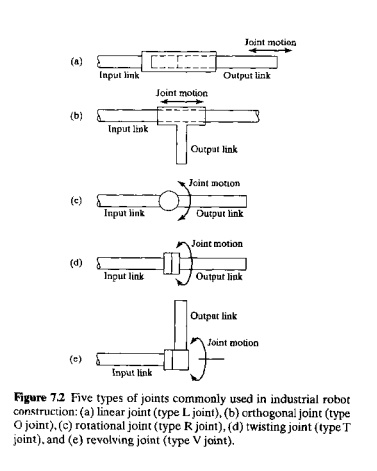 Rotational Join (type R joint). This type provides rotational relative motion, with the axis of rotation perpendicular to the axes of the input and output links.

Twisting  joint (type T joint) This joint also involves rotary motion, but the axis or rotation is parallel to the axes of the two links.

Each of these joint types has a range over which it can be moved. The range for a translational joint is usually less than a meter. The three types of rotary joints may have a range as small as a few degrees or as large as several complete turns

A robot manipulator can he divided into two sections: a body-and-arm assembly and a wrist assembly. There are usually three degrees-of-freedom associated with the body-and-arm, and either two or three degrees-of-freedom associated with the wrist. At the end of the manipulator's wrist is a device related to the task that must be accomplished by the robot. The device, called an end effector (Section 7.3), is usually either (1) a gripper for holding a work-part or (2) a tool for performing some process. The body-and-arm of the rotor is used to position the end effector. and the robot's wrist is used to orient the end effector.

Body-and-Arm Configurations. Given the five types of joints defined above, there are 5 x 5 x 5 = 125 different combinations of joints that can be used to design the body-and-arm assembly for a three-degree-of-freedom robot manipulator. In addition, there are design variations within the individual joint types [e.g.. physical size of the joint and range of motion). It is somewhat remarkable, therefore, that there are only five basic configurations commonly available in commercial industrial robots. These five configurations are:

Polar configuration. This configuration (Figure 7.3) consists of a sliding arm (L joint) actuated relative to the body, that can rotate about both a vertical axis (1' joint) and a horizontal axis (R joint).

Cartesian coordinate robot. Other names for this configuration include rectilinear robot and iyz robot. As shown in Figure 7 5,it is composed of three sliding joints, two of which are orthogonal.

4, Jointed-arm-robot. This robot manipulator (Figure 7.6) has the general configuration of a human arm. The jointed arm consists of a vertical column that swivels about the 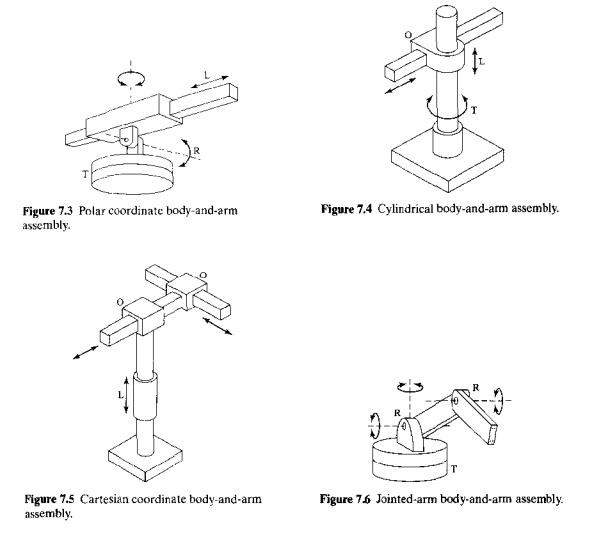 base using a T joint. At the top of the column is a shoulder joint (shown as an R joint in our figure), whose output link connects to an elbow joint (another R joint)

5. SCARA. SCARA is an acronym for Selective Compliance Assembly Robot Arm. This configuration (Figure 7.7) is similar to the jointed arm robot except that the shoulder and elbow rotational axes are vertical, which means that the arm is very rigid in the vertical direction. but compliant in the horizontal direction. This permits The robot to perform insertion tasks (for assembly) in a vertical direction, where some side-to-side alignment may be needed to mate the two parts properly.

Wrist Configurations. The robot's wrist is used to establish the orientation of the end effector. Robot wrists usually consist of two or three degrees-of-freedom. Figure 7.8 illustrates one possible configuration for a three-degree-of-freedom wrist assembly. The three joints are defined as: (1) roll, using a T joint to accomplish rotation about the robot's arm axis: (2) pitch, which involves up-and-down rotation, typically using a R joint; and (3) yaw, which involves right-and-left rotation, also accomplished by means of an R-joint, A two-d.o.f wrist typically includes only roll and pitch joints (T and R joints).

To avoid confusion in the pitch and yaw definitions, the wrist roll should be assumed in its center position, as shown in our figure. To demonstrate the possible confusion, consider a two-jointed wrist assembly. With the roll joint in its center position, the second joint (R joint) provides up-and-down rotation (pitch). However, if the roll position were 90 degrees from center (either clockwise or counterclockwise), the second joint would provide a right-left rotation (yaw).

The SCARA robot configuration (Figure 7.7) is unique in that it typically does not have a separate wrist assembly. As indicated in our description, it is used for insertion type assembly operations in that the insertion is made from above. Accordingly. the orientation requirements are minimal, and the wrist is therefore not needed. Orientation of the object to be inserted is sometimes required, and an additional rotary joint can be provided for this purpose. The other four body-and-arm configurations possess wrist assemblies that almost always consist of combinations of rotary joints of types Rand T.

Work Volume. The work volume (the term work envelope is also used) of the manipulator is defined as the envelope or space within which the robot can manipulate the end of its wrist. Work volume is determined by the number and types of joints in the manipulator (body-and-arm and wrist), the ranges of the various joints, and the physical sizes of the links. The shape of the work volume depends largely on the robot's configuration. A polar configuration robot tends to have a partial sphere as its work volume, a cylindrical robot has a cylindrical work envelope. and a Cartesian coordinate robot has a rectangular work volume.

Robot  joints  are actuated      using any of three possible      types of drive  systems:  (1) electric, (2) hydraulic, or (3) pneumatic. Electric drive systems use electric motors as joint actuators (e.g., servomotors or stepping motors, the same types of motors used in NC positioning systems, Chapter 6), Hydraulic and pneumatic drive systems use devices such as linear pistons and rotary vane actuators to accomplish the motion of the joint.

The drive system, position sensors (and speed sensors if used), and feedback control systems for the joints determine the dynamic response characteristics of the manipulator. The speed with which the robot can achieve a programmed position and the stability of its motion are important characteristics of dynamic response in robotics. Speed refers to the absolute velocity of the manipulator at its end-of-arm. The maximum speed of a large robot is around 2 rn/sec (6 ft/sec). Speed call be programmed into the work cycle so that different portions of the cycle are carried out at different velocities. What is sometimes more important than speed is the robot's capability to accelerate and decelerate in a controlled manner. In many work cycles. much of the robot's movement is performed in a confined region of the work volume; hence, the robot never achieves its top-rated velocity. In these cases, nearly all of the motion cycle is engaged in acceleration and deceleration rather than in constant speed. Other factors that influence speed of motion are the weight (mass) of the object that is being manipulated and the precision with which the object must be located at the end of a given move. A term that takes au of these factors into consideration is speed of response, that refers to the time required for the manipulator to move from one point in space to the next. Speed of response is important because it influences the robot's cycle time, that in turn affects the production rate in the application. Stability refers to the amount of overshoot and oscillation that occurs in the robot motion at the end-of-arm as it attempts to move to the next programmed location. More oscillation in the motion is an indication of less stability. The problem is that robots with greater stability are inherently slower in their response, whereas faster robots are generally less stable.