Rhinoviruses are the most important causative agents of com-mon cold and upper respiratory tract infections.

Rhinoviruses are the most important causative agents of com-mon cold and upper respiratory tract infections. Earlier, many viruses isolated from the cases of common cold were known as common cold viruses, Salisbury viruses, or Muri viruses. Now all these viruses have been given the name rhinoviruses (rhino referring to the organ specifically affected).

Rhinoviruses are small RNA viruses, morphologically resem-bling other picornaviruses. They grow better in vivo at a tem-perature of 30°C than at 37°C, a property that contributes partially for predilection of these viruses for the cooler envi-ronment of the nose and conjunctiva. The rhinoviruses have been classified into more than 102 serotypes on the basis of a type-specific antigen in their capsids.

Rhinoviruses differ from other picornavirus in being more acid labile and more heat stable. They are inactivated at a low pH below 5 and become completely inactive at pH 3. They are relatively stable at 20–37°C and can survive on environmental surfaces, such as door knobs, for several days. Some serotypes 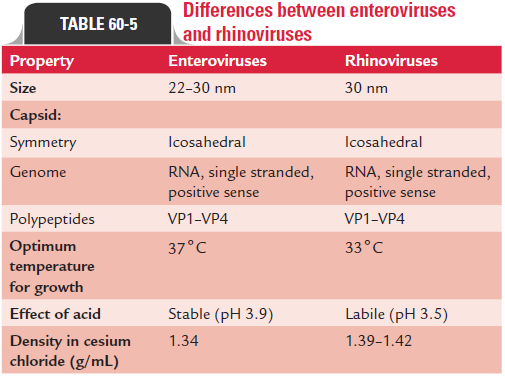 may survive heating at 50°C for 1 hour. They are resistant to 20% ether and 5% chloroform but are sensitive to hypochlorite and aldehyde. Differences between enteroviruses and rhinovi-ruses are summarized in Table 60-5.

Rhinoviruses grow at 37°C in cell lines of human or simian origin in the presence of good oxygenation, low pH (7 or less), and low temperature. They can grow in human embryonic tracheal epithelial, human diploid cell lines, and HeLa cells, but without producing conspicuous cytopathic effects. Some strains grow well in both monkey and human cell lines and are designated as M strains, and those that grow only on human cells are known as H strains.

Infection is transmitted to other susceptible human hosts by nasal secretions expelled from the nose of a patient during sneezing and coughing. Infection can be initiated by as little as one infectious viral particle. During the acute phase of illness, nasal secretions contain approximately 500–1000 infectious virions/mL of secretions. Also, these secretions may contami-nate hands, fingers, handkerchiefs, or paper tissues, and the normal susceptible hosts who come in contact with these con-taminated surfaces acquire the virus. The virus enters through the nose, mouth, or eyes and causes infections of the upper respiratory tract including the throat.

The infection occurs mostly by multiplication of the virus in the nose. The onset and severity of the symptoms usually correlate with the quantity of viruses excreted in the nasal secretion and the time of viral shedding. Infected cells release bradykinin and histamine, which cause a running nose. The progression of infection is limited by an interferon which is produced in nasal secretion in response to the nasal infections. However, the cytokines produced during infection can pro-mote the spread of the virus by enhancing the expression of inter-CAM-1 viral receptor.

Host immunity in rhinoviruses is characterized by both humoral and cell-mediated immunities. Humoral immunity is characterized by the production of both nasal secretory IgA and serum IgG antibodies within a week of infection. The cell-mediated immunity does not play any important role in controlling rhinovirus infection. Immunity is transient and is usually serotype specific. Therefore, one attack of com-mon cold by rhinovirus does not confer immunity against subsequent attacks due to presence of numerous serotypes of the virus.

Rhinoviruses are the major cause of common cold and are responsible for more than 50% of all colds worldwide. Other viruses which may also cause common cold include coronaviruses, coxsackieviruses A21 and A24, echoviruses 11 and 20, and parainfluenza viruses.

Rhinovirus causes common cold after an incubation period of 2–4 days. The condition begins as an upper respiratory infec-tion with sneezing, soon followed by a running nose (rhinorrhea). Rhinorrhea then increases and is associated with symptoms of nasal obstruction. Mild sore throat, headache, malaise, fever, and rigor sometimes accompany rhinovirus infection. Usually, symptoms subside in about a week, but in some cases the cough and nasal symptoms may persist for 7–10 days or longer. The clinical manifestations of the common cold are characteristic; hence laboratory diagnosis may not be necessary.

Infected humans suffering from acute illness are the only reservoirs and sources of rhinovirus that cause common cold. Asymptomatic people also play an important role in transmit-ting the infection even though they shed few viruses in their respiratory secretions.

Rhinovirus is transmitted mainly by two routes: first, by direct inhalation of infectious droplets and second, by direct contact with hands or fomites contaminated with respiratory droplets. Contaminated hands appear to be the major route of transmission, and direct person-to-person contact is the major mode of spread of infection. Common cold occurs most commonly in infants and in children and occurs most frequently in the early autumn and the late spring in people living in tem-perate climates. The nonenveloped rhinoviruses are extremely stable and survive on external objects, such as fomites for many hours, thereby facilitating transmission of infection.

·           The rhinoviruses are identified by their typical cytopathic effects and demonstration of acid lability.

·           Serotyping of the strains is performed with the use of pools of specific neutralizing antisera.

Treatment of the condition is symptomatic. No vaccine is available against rhinovirus. Hand washing and disinfection of contaminated objects are the best methods of preventing transmission of the virus.

Hepatitis A virus, formerly known as enterovirus, has now been accorded the status of a separate genus Hepatovirus of the family Picornaviridae.