Parvoviruses are the smallest of the DNA viruses belonging to the family Parvoviridae. They are icosahedral, nonenvel-oped viruses containing a single-stranded DNA.

Parvoviruses are the smallest of the DNA viruses belonging to the family Parvoviridae. They are icosahedral, nonenvel-oped viruses containing a single-stranded DNA. Human parvovirus B19 (B19) is the only known parvovirus that is pathogenic for humans, and it shows tropism for erythroid progenitor cells.

The family Parvoviridae          consists of  three genera: Dependovirus,    Parvovirus, and Erythrovirus. The genus Dependovirus consists of poxviruses, which are defectiveand replicate only in association with a second helper virus. They neither cause illness by themselves nor alter the infec-tion caused by helper viruses. These are usually found in association with an adenovirus, hence are known as adeno-associated viruses. These viruses do not cause any disease in humans. The genus Parvovirus includes animal viruses of veterinary importance, such as feline panleukopenia virus and canine parvovirus. The genus Erythrovirus consists of B19, the only member of the Parvoviridae family known to cause disease in humans. The diseases associated with B19 are summarized in Table 59-1. 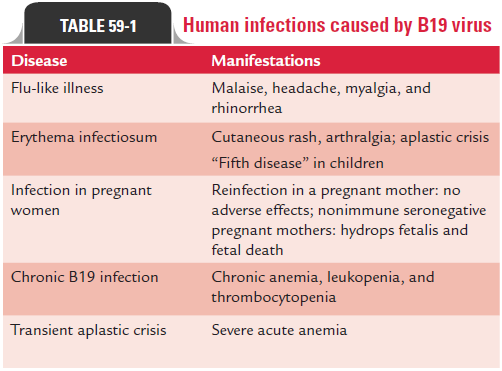 Parvovirus B19, or B19 virus, is the causative agent of erythema infectiosum (“fifth disease”—it was fifth of the six classified exanthematous diseases of childhood), a mild viral illness of children, and polyarthralgia–arthritis syndrome in immuno-competent adults.