Poliovirus: Properties of the Virus

Poliomyelitis is an enteric infection caused by polioviruses transmitted by the fecal–oral route. The worldwide preva-lence of poliomyelitis has decreased by more than 99% due to improved socioeconomic conditions and availability of vaccines.

Poliomyelitis is an enteric infection caused by polioviruses transmitted by the fecal–oral route. The worldwide preva-lence of poliomyelitis has decreased by more than 99% due to improved socioeconomic conditions and availability of vaccines.

·           Poliovirus was the first animal virus to be purified and obtained in crystalline form.

·           The viral genome is a single-stranded positive-sense RNA, which can be directly translated by host ribosomes to form a polyprotein, which is divided into 11 different proteins. 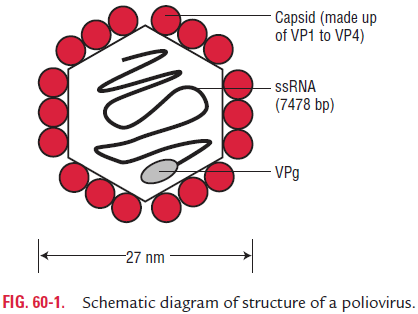 Polioviruses are cytolytic; they replicate in cytoplasm of the host cell. Polioviruses show high host specificity restricted to primates, which include both humans and nonhuman pri-mates, such as monkeys and apes. This is due to presence of a specific receptor that is present only on primate cell mem-brane. However, purified viral RNA without the capsid protein can enter and replicate in many nonprimate cells by avoiding the cell membrane receptors.

The virion causes infection first by binding to the spe-cific receptor on the cell membrane and enters the cell. Once inside the cell, the virion uncoats by removing the capsid and releases the RNA genome. The RNA serves as the mRNA and is translated into a very large polypeptide known as noncapsid viral protein. Subsequently, the viral protein is utilized by the viral enzyme protease to form capsid proteins of the progeny virions as well as several noncapsid proteins including the RNA polymerase.

RNA polymerase initiates the synthesis of progeny RNA genomes. This is followed by assembly of the progeny virions by coating of the genome RNA with capsid proteins in the cell cytoplasm. The release of progeny virions occurs by the lysis and death of the cells, but not by budding from the cell membrane.

The polioviruses have been classified into three serotypes (types 1, 2, and 3) on the basis of neutralization test. The prototype strains for type 1 poliovirus are Brunhilde and Mahoney strains, for type 2 poliovirus are Lansing and MEFI strains, and for type 3 poliovirus are Leon and Saukett strains. Type 1 is the most common poliovirus and causes most epi-demics of poliomyelitis; type 2 strain is usually associated with endemic infections, whereas type 3 strains occasionally cause epidemics. Two antigens, C (coreless or capsid) and D (dense) are recognized by enzyme-linked immunosorbent assay or precipitation test. The C antigen, also known as heated or H antigen is associated with the empty, noninfec-tious virus. It is less specific and reacts with heterotypic sera. The D antigen, also known as the nature or N antigen is asso-ciated with the whole virion. It is more specific and is type specific. Antibodies against D antigen are protective; hence the potency of injectable polio vaccine is measured in terms of D antigen unit.

Poliovirus is sensitive to heat and is readily inactivated at 55°C for 30 minutes. It is also sensitive to formaldehyde and oxidiz-ing disinfectants. The viruses are readily destroyed by chlo-rination in water, but the presence of organic matter delays inactivation.

Polioviruses are resistant to lipid-soluble agents (ether, chlo-roform, and bile), proteolytic enzymes of the intestine, and detergents. They survive in feces for months at 4°C and for  years at 220°C. They survive for days to several weeks in feces at room temperature depending on the environmental condi-tions, such as temperature, moisture, acidity, etc. Polioviruses are killed by lyophilization.