Just as bacteria can induce a type of cancer in plants, bacteria or viruses could cause cancer in animals.

Just as bacteria can induce a type of cancer in plants, bacteria or viruses could cause cancer in animals. One method to determine whether viruses can do so in animals is to try to induce cancer in animals using a cell-free or bacteria-free extract prepared from tumor cells. One of the first such isolations of a tumor-inducing material was made by Peyton Rous from a cancer of connective tissue—a sarcoma—isolated from a chicken. Hence the virus is called Rous sarcoma virus, or RSV. Repeated propagation of the virus in the laboratory extended its range from chickens to many different animals and increased its potency. RSV is a member of a class of RNA viruses that cause sarcomas in birds, mice, cats, monkeys, and other animals. These viruses are called avian, mur-ine, feline, and simian sarcoma viruses. Similar techniques have been used to detect cancers of various types of blood cells from nonhumans, and the causative viruses are called leukemia viruses. Detection of similar viruses that cause tumors or leukemias in humans has been much more difficult and only a few are known.

The sarcoma and leukemia viruses are both retroviruses. That is, the nucleic acid within the virus particle is single-stranded RNA, and yet this RNA can be duplicated to double-stranded DNA and integrated into the genome of some infected cells (Fig. 23.8). The enzyme reverse transcriptase that performs the replication is packaged within the virus particle along with a virally encoded protease and the integrase. 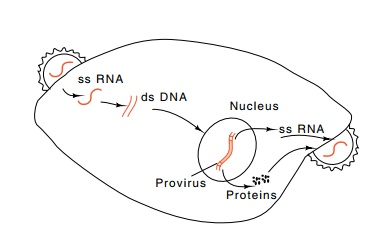 Initiating the viral replication, much like replication from DNA templates, requires a free hydroxyl group in the proper location for polymerase to use as an initiator. A tRNA molecule of cellular origin 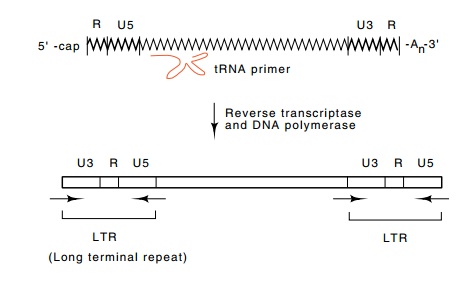 Figure 23.9 The reverse transcription process initiates from tRNA, copies theU3, R, and U5 sequences to generate the LTRs, and ultimately yields double-stranded DNA of the provirus.

hybridized to the virus RNA and packaged within the virus provides the necessary priming hydroxyl. The conversion to double-stranded DNA slightly rearranges and duplicates the ends of the genome to generate the long terminal repeats, LTRs, that are found at each end of the RNA (Fig. 23.9). These are synthesized from the unique U5 and U3 regions that are originally found at each end of the RNA, and the R region that is found at both ends. This replication and synthesis process most likely makes use of the two genetically identical RNA molecules that are encapsidated within the virion and can involve jumping of the reverse transcriptase from one template to the other or from one point on the template to another point. After its duplication, the linear double-stranded DNA migrates to the nucleus where the phage-encoded IN protein, which comes from part of the pol gene, integrates at least one copy into the chromosome. If such an integration occurs in a germ line cell, the retroviruses can pass vertically from one generation to the next. If non-germ line cells are infected, the virus is said to spread horizon-tally.

Three essential viral genes are found in nondefective retroviruses: gag, pol, and env. In Rous sarcoma virus, these three genes encode: 1.four structural proteins found within the virus and a protease; 2. the reverse transcriptase, its associated RNAse H, an enzyme that degrades RNA from the RNA-DNA duplex intermediates, and the integrase; 3. two virus envelope glycoproteins. The virus uses two methods to synthesize this large group of different proteins from just three “genes” and one major promoter.

Recall that eukaryotes rarely use polycistronic messengers. Gener-ally, multiple translation initiations are not used to synthesize different proteins from a single messenger. Retroviruses follow this general rule, but in doing so, they use several different mechanisms to generate at

least ten different proteins from three open reading frames on one RNA molecule. From the gag gene one polypeptide is synthesized. This is cut

into five different polypeptides. The pol gene following the gag gene usually is out of frame with gag, and sometimes slightly overlapping. Ribosomes translating gag occasionally shift their reading frame into that of the pol gene and synthesize a combined gag-pol polypeptide. This frameshifting requires an RNA hairpin or pseudoknot shortly down-stream from the frameshift point. As a result of the RNA structure and suitable codons at the frameshift site, the frequency of frameshifting approaches 5%. From the long Gag-pol polypeptide, proteases excise segments that constitute the internal proteins and the protease. The protease is encoded by RNA occupying the position between gag and pol, or sometimes by RNA constituting the first part of the pol gene.

A more elaborate scheme is used for translation of the env genes. The retrovirus mRNA is spliced so that the env gene occupies the 5’ end of messenger, sometimes using the the initial portion of the gag coding region, so that it can be translated. The gag product also is cleaved and yields two polypeptides.

It is the integrated or proviral form of the retroviral DNA that is transcribed to yield capped and polyadenylated mRNA that is ultimately translated into viral proteins. The R region of the virus is defined as the transcription start point of this RNA. The promoter for this RNA must therefore lie in the U3 regions that exist at both ends of the integrated virus. Although the right-hand promoter usually is inactive, in the cases where it is active it is in position to transcribe adjacent cellular DNA. Therefore a retrovirus can act like a portable promoter. Usually this causes no problems, but sometimes the adventitious transcription is harmful.

Acutely transforming retroviruses are capable of inducing tumor formation within several days of injection into animals. These carry a gene in addition to the three discussed above. This additional gene is called an oncogene. Such acutely transforming viruses usually are defective, however, and lack functional pol or env genes. Therefore they must be grown in association with their nondefective relatives. This is analogous to complementation by lambda of a defective transducing phage. RSV is an exception to the general case, as this virus is nonde -fective and carries an oncogene, called src. Translation of the src transcript is accomplished after its mRNA is spliced in a reaction that places the AUG codon for this protein near the 5’ end of the RNA molecule.

Retroviruses lacking oncogenes are also capable of inducing tumors in susceptible animals, but more slowly than the acutely transforming retroviruses. These slow retroviruses often take several months to gen-erate tumors. Apparently, out of a great number of virus-infected cells, a small number, often only one, contain a retrovirus inserted adjacent to a cellular gene involved with growth regulation. The nearby location of the retrovirus increases expression of the gene, either from readthrough of a viral transcript or from increased expression from the cellular promoter as a result of an enhancer sequence within the LTR of the virus. The virus may also promote rearrangement of the gene so that variant protein is synthesized.