As mentioned above, since mutagens are carcinogenic, it is likely that some cancers are caused by mutation.

As mentioned above, since mutagens are carcinogenic, it is likely that some cancers are caused by mutation. How could we determine the nucleotide change or changes that cause a human cell to be trans-formed? If such a change could be detected, it would definitively identify the altered gene. This would assist the study of the gene product’s normal cellular function. In principle, comparing the nucleotide se-quences of all the chromosomes from a normal cell and a transformed cell would reveal the change. Even if such an ill-advised attempt to sequence about 6 × 109 base pairs of DNA could be accomplished, however, the important change would likely be masked by a multitude of extraneous random nucleotide changes.

To reduce the problem of locating the nucleotide change that causes a cancer to manageable proportions, a powerful selection technique for the critical DNA fragment is required. The best selection is to use the ability of the DNA to induce uncontrolled growth. Cells growing in culture can be used for such a screening. For example, one line of mouse cells, NIH 3T3 cells, has been adapted for continuous growth in culture, in contrast to primary cell lines that grow for only a limited number of generations. Nonetheless, the NIH 3T3 cells still display density-depend-ent growth regulation and cease further growth when a monolayer of cells has grown on the container surface. Thus, the cells can be consid-ered to be part way along the pathway leading to transformation. If one of these cells is transformed to a cancerous state, it loses its growth regulation, and its descendants continue growing when the other cells in the monolayer have stopped. The resulting pile of cells is detectable through a microscope, and is called a focus. Weinberg and others have found that DNA extracted from 10% to 20% of different human tumors can transform NIH 3T3 cells to form foci.

Figure 23.5 The use of a tag to permit detection of an oncogene when cloningcrude DNA from a transformed cell into E. coli. The desired plaque contains material complementary to the tag known to be associated with the oncogene.

Although the focus assay for transforming DNA fragments could be used in conjunction with a straightforward biochemical purification of the desired DNA fragments, genetic engineering methods permitted more rapid isolation of the DNA. The basic trick was to tag restriction fragments of the DNA extracted from a tumor before it was used to transform cells to grow foci. DNA extracted from cells of a focus was then cloned in E. coli and the colonies or plaques were screened using the tag sequence as a probe. Of course, the tag had to be a sequence not normally found in the NIH 3T3 cells or in Escherichia coli (Fig. 23.5). Therefore, the clone containing the human-derived sequence capable of transforming the cells to density-independent growth could be detected.

Two methods can be used for tagging the oncogene isolated from cancerous cells. One makes use of naturally occurring sequences. As mentioned, in humans, a particular sequence called the Alu sequence is widely scattered throughout the genome and is repeatedhundreds of thousands of times. Because this sequence contains two Alu restriction enzyme cleavage sites, cleavage of human DNA with Alu restriction enzyme generates hundreds of thousands of copies of a specific size of DNA fragment in addition to all the other random sized fragments. The mouse genome lacks this sequence. Simply because of its high repetition number and wide dispersal through the human genome, one of the Alu sequences was likely to lie near the mutated gene responsible for the uncontrolled cell growth and transformation of cells to form a focus. Indeed, one did, and Weinberg was able to use this as a tag of the human gene that was mutated to cause the human cancer.

A second method for tagging the oncogene is direct and general. DNA isolated from a tumor can be digested with a restriction enzyme, and a synthetic DNA containing the desired tagging sequence can be ligated to it. Then the mixture of DNAs can be transformed into cultured mouse 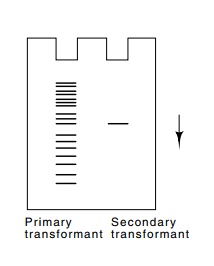 Figure 23.6 Appearance of aSouthern transfer of DNA ex - tracted from primary and secondary mouse transfor-mants in which the radioactive probe would be the human Alu sequence.

cells for selection of the fragment containing the oncogene. This is followed by cloning in bacteria and identification of the oncogene clone with the use of the tag sequence as a probe.

A minor technical point must be mentioned. The cultured cells that take up the human DNA usually take up many molecules. Therefore, although a focus of cells will contain the desired transforming gene, it is likely to contain a number of other irrelevant human sequences as well. These also will contain the tagging sequence. This problem is eliminated by using DNA extracted from the primary round of transfor-mation in a second round of transformation. Indeed, after the first cycle, a Southern transfer prepared from DNA of a transformed cell reveals many sizes of restriction fragments containing the human-derived Alu tagging sequence (Fig. 23.6), but after a second cycle of transformation, all the transformants contain only a single copy of the tagging sequence. Presumably this is directly linked to the stretch of DNA that is respon-sible for the transformation.

The techniques described above permitted the cloning and isolation of DNA fragments 5 to 10 Kb long that contained the cellular oncogene from bladder carcinoma cells that could transform NIH 3T3 cells. Once these fragments were obtained, they could be used as probes in screen-ing genomic libraries made from DNA isolated from noncancerous human cells. Thus the normal gene predecessor of the oncogene could also be obtained. Then the question was merely to determine the difference between the two DNAs. Again, they could have been totally sequenced, but ingenuity reduced the work. Restriction fragments be-tween the two were exchanged to find a small DNA segment that was necessary for transformation (Fig. 23.7). 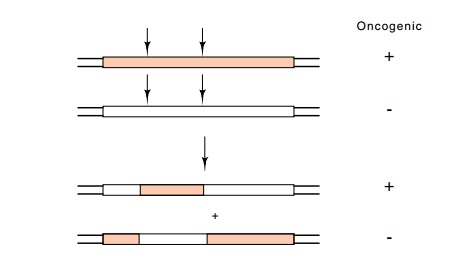 Figure 23.7 Restriction fragment interchange between the cellular homologof the oncogene and the oncogene itself, which can identify the fragment containing the critical base change.

A single nucleotide difference was found to separate the normal cellular prototype and its oncogenic variant. The most common change in the bladder cancers was found to occur in the twelfth amino acid of a protein. Since both Northern transfers of total cellular RNA and immune precipitations of the actual gene product involved show that neither transcription of the gene nor its translation efficiency is appre-ciably altered by the mutation, the structural change in the protein must be the cause of its oncogenicity, and this has been observed. The gene encodes a protein called Ras that hydrolyzes GTP to GDP. The mutant protein possesses reduced hydrolytic activity.