Reticular Formation of the Brainstem - Internal Structure of Brainstem

The term reticular formation was originally used to designate areas of the central nervous system which were not occupied by well defined nuclei or fibre bundles, but consisted of a network of fibres within which scattered neurons were situated.

Reticular Formation of the Brainstem

The term reticular formation was originally used to designate areas of the central nervous system which were not occupied by well defined nuclei or fibre bundles, but consisted of a network of fibres within which scattered neurons were situated. Such areas are to be found at all levels in the nervous system. In the spinal cord there is an intermingling of grey and white matter on the lateral side of the neck of the dorsal grey column. This area is sometimes referred to as the reticular formation of the spinal cord. The reticular formation is, however, best defined in the brainstem where it is now recognised as an area of considerable importance. Some centres in the cerebrum and cerebellum are regarded by some authorities to be closely related, functionally, to this region.

The reticular formation extends throughout the length of the brainstem. In the medulla it occupies the region dorsal to the inferior olivary nucleus. In the pons it lies in the dorsal part, while in the midbrain it lies in the tegmentum.

The neurons to be seen in the reticular formation vary considerably in the size of their cell bodies, the length and ramifications of their axons, and the behaviour of their dendrites. Many neurons have extensive dendritic trees and their ramifications may cover a wide extent both vertically and transversely. The connections of individual neurons are difficult to determine as many of the pathways concerned are polysynaptic.

A number of reticular nuclei have been described. The limits of such nuclei are ill defined, and their functional significance is often obscure. The following scheme includes the better known nuclei of the reticular formation.

Nuclei of the reticular formation of the brainstem

These can be divided into three longitudinal columns (in each half of the brainstem).

1.              The median column lies next to the middle line. The nuclei in it are called the nuclei of theraphe, or paramedian nuclei.

2.              The medial column (or magnocellular column) consists of nuclei having neurons of large or medium size. 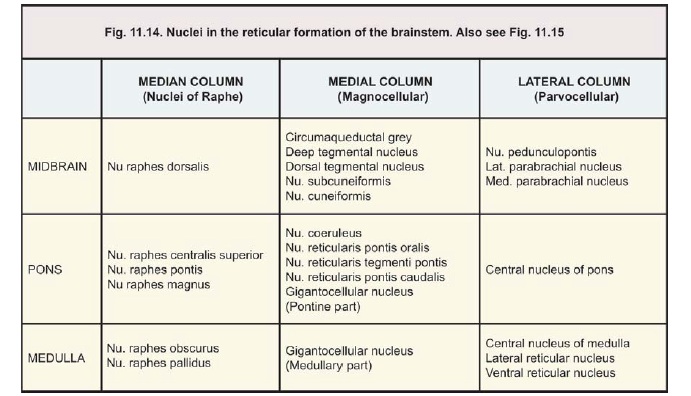 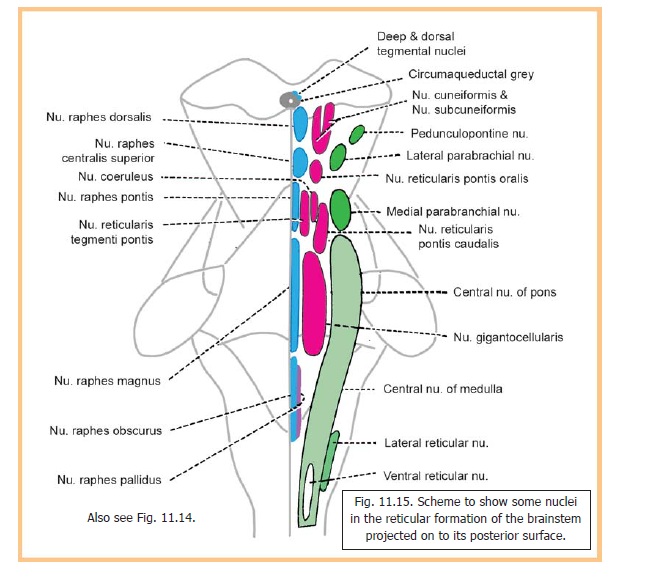 With the development of immuno-fluorescence techniques a number of neuromediators have been demonstrated in the reticular formation. These include acetylcholine, noradrenaline, adrenaline, dopamine (confined to the midbrain), and serotonin. New maps of the reticular formation, based on the distribution of such neuromediators, are now being drawn up (as for other regions of the nervous system). Such studies have created a new interesting science of chemoarchitectonics. It appears logical to assume that grouping of areas in this way may be of greater functional relevance than the division into ill defined nuclei.

Many neurons in the raphe nuclei are serotoninergic and constitute part of a system that ramifies into the entire central nervous system.

The reticular formation has numerous connections. Directly, or indirectly, it is connected to almost all parts of the nervous system. The better established afferents are shown in Fig. 11.16; and the efferents in Fig. 11.17. 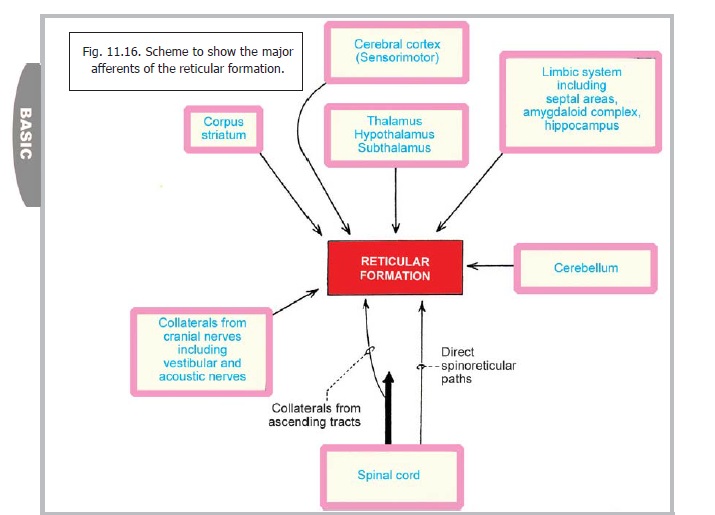 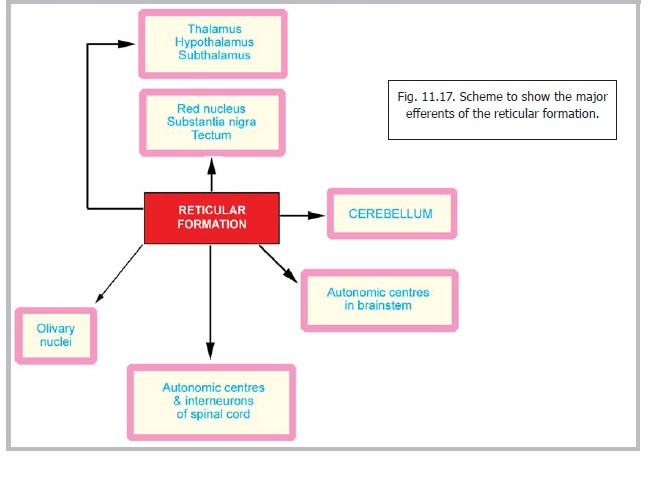 The pathways involved are both ascending and descending; crossed and uncrossed; somatic and visceral. In the description that follows, the major pathways involving the reticular formation are taken up one by one. It must be emphasised, however, that the reticular formation is not to be regarded merely as a relay station on these pathways. It has an important regulatory role, both facilitatory and inhibitory.

The reticular formation receives impulses from the motor and other areas of the cerebral cortex and relays them to the spinal cord through the medial and lateral reticulospinal tracts. The corticoreticular fibres descend along with corticospinal fibres. They terminate mainly in relation to the oral and caudal reticular nuclei of the pons, and the gigantocellular nucleus of the medulla. Fibres arising in the oral and caudal nuclei of the pons form the pontine (or medial) reticulospinal tract, while fibres arising in the gigantocellular nucleus form the medullary (or lateral) reticulospinal tract. Apart from these relatively better defined tracts reticulospinal fibres are widely scattered in the anterior and lateral funiculi of the spinal cord; and some descend through the intersegmental tracts. Apart from the nuclei mentioned above reticulospinal fibres may arise from other nuclei including the central nucleus of the medulla.

The following nuclei of the reticular formation have reciprocal connections with the cerebellum (Fig. 11.18). 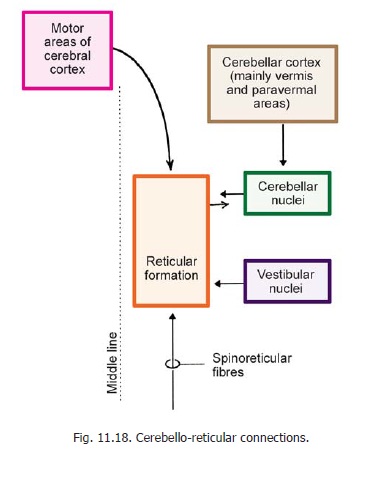 2.              Paramedian reticular nucleus. (This nucleus is not included in the list given in Fig. 11.14. It is located in the medulla within the medial longitudinal fasciculus).

Through these connections the reticular formation connects the cerebral cortex, and the spinal cord, to the cerebellar cortex.

It has been seen that many ascending tracts passing through the brainstem are intimately related to the reticular formation. Many of the fibres in these tracts give off collaterals to it. These come from the spinothalamic tracts, from secondary trigeminal pathways and from auditory pathways. These collaterals terminate predominantly in the lateral part of the reticular formation. Fibres arising here project to the intralaminar and reticular nuclei of the thalamus. These nuclei in turn project to widespread areas of the cerebral cortex. These pathways form part of the ascending reticular activating system (ARAS) which is believed to be responsible for maintaining a state of alertness.

Summary of Functions of the Reticular Formation

Because of its diverse connections the reticular formation is believed to have a controlling or modifying influence on many functions. Some of them are as follows.

Through its direct connections with the spinal cord; and indirectly through the corpus striatum, the cerebral cortex and the cerebellum, the reticular formation has an influence on fine control of movements including those involved in postural adjustments, locomotion, skilled use of the hands, speech etc.

The reticular formation influences conduction through somatosensory pathways. Similar effects may also be exerted on visual and auditory pathways.

Through its connections with the hypothalamus, the reticular formation influences activity of the adenohypophysis and of the neurohypophysis.

A similar influence is also exerted on the pineal body.

E. The reticular formation also influences other hypothalamic functions. These include a possible effect on circadian rhythms.

F. The significance of the reticular formation in controlling arousal and the state of consciousness through the ascending reticular activating system has been mentioned above.

The nuclei of the raphe (or raphe nuclei) have been described. They are also referred to as the paramedian reticular nuclei. Special interest in the raphe nuclei has ensued after the demonstration that they are the central part of an extensive serotoninergic system that permeates the entire nervous system as summarised below (Fig. 11.19). 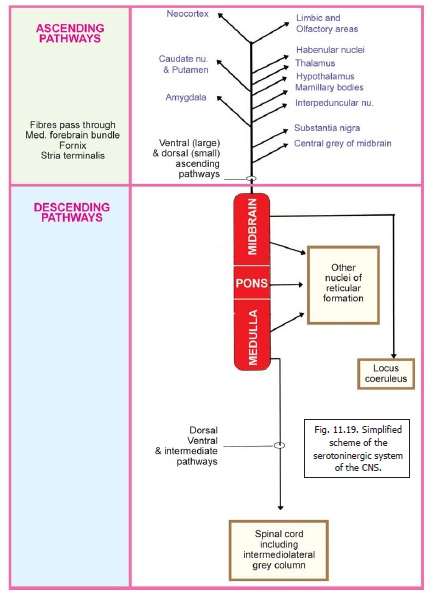 1.              Serotoninergic fibres descending from the raphe nuclei (mainly of the medulla) reach all levels of the spinal cord. Dorsal (or lateral) and ventral pathways are described. Many of the fibres end in relation to neurons of the intermediolateral grey column.

4.              The nucleus raphe magnus projects to the caudal part of the spinal nucleus of the trigeminal nerve and influences perception of pain through the nucleus.

5.               Ascending serotoninergic fibres take origin mainly from the dorsal raphe nucleus, and from the superior central nucleus. The fibres ascend as a large ventral bundle, and a much smaller dorsal bundle. On their journey upwards many of the fibres pass through the medial forebrain bundle. Some traverse the fornix, and the stria terminalis. The centres these fibres reach include the following.

The functions attributed to the serotoninergic system include the following.

1.              Fibres descending dorsally in the spinal cord may form part of a pain controlling pathway. They terminate mainly in the posterior grey column. Cranially, this pathway connects to some centres in the midbrain that constitute a pain control centre (periaqueductal grey, dorsal raphe nucleus and cuneiform nuclei).

2.              The ‘intermediate’ fibres descending into the spinal cord influence sympathetic control of the cardiovascular system.

3.              Ventrally descending fibres influence ventral horn cells to which they are facilitatory.

4.              Ascending serotoninergic fibres influence the activities of the areas to which they project, mainly those of the limbic and related areas.

The locus coeruleus is an area in the floor of the fourth ventricle, at the upper end of the sulcus limitans. The area has a bluish colour caused by the presence of pigment in the underlying neurons. These neurons constitute the nucleus coeruleus.

Descending fibres travel to the pontine nuclei, reticular formation of the medulla, and several cranial nerve nuclei (cochlear nuclei, nucleus of tractus solitarius, spinal nucleus of trigeminal nerve, dorsal nucleus of vagus). Fibres descend into the spinal cord in the anterior and lateral funiculi. These fibres terminate in both the dorsal and ventral grey columns, and specially in relation to neurons giving origin to the sacral parasympathetic outflow.

Ascending noradrenergic fibres permeate into many parts of the brain. Within the midbrain they reach the colliculi and the central grey matter. Some fibres reach the cerebellum (cortex as well as cerebellar nuclei).

Fibres ascending into the cerebral hemisphere travel through many fibre bundles mentioned elsewhere. They include the central tegmental tract, medial and lateral longitudinal striae, stria terminalis, fornix, mammilothalamic tract and the diagonal band. The areas receiving the noradrenergic fibres include the following.

In the telencephalon: Parts of neocortex; limbiccortex including the cingulate gyrus, the parahippocampal gyrus and the hippocampus; septal areas, anterior perforated substance, olfactory bulb and anterior olfactory nucleus.

The functions of the noradrenergic system are not well understood. The system probably plays a role in control of cardiovascular, respiratory and gastrointestinal functions. It may have a role in circadian rhythms (including the sleep-waking cycle).