Transverse sections through the lower and upper parts of the pons are illustrated in Figs. 11.5 and 11.7. Some features common to both these levels have been already considered (Fig. 6.7). The subdivision of the pons into dorsal and ventral parts and its relationship to the superior, middle and inferior cerebellar peduncles has been noted. 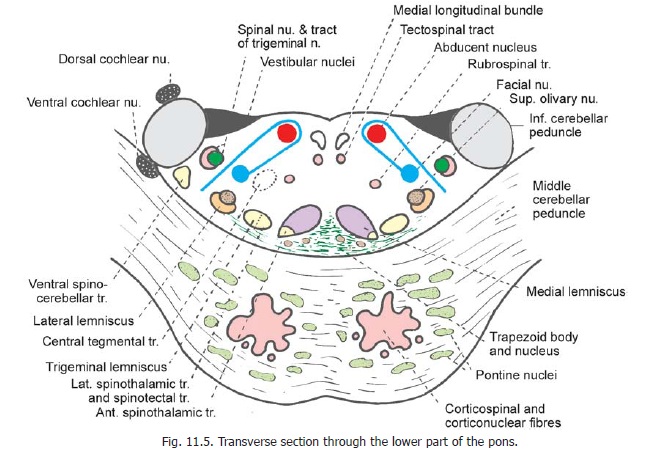 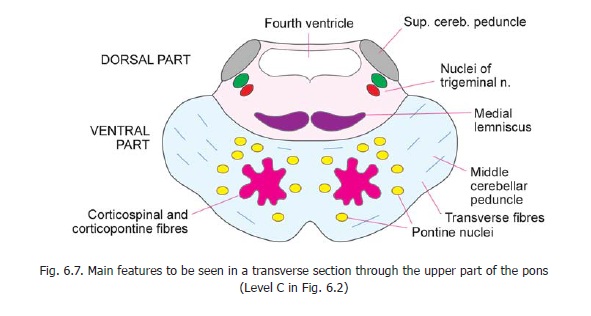 We have seen that the ventral part of the pons contains: (a) the pontine nuclei, (b) vertically running corticospinal and corticopontine fibres, and (c) transversely running fibres arising in the pontine nuclei and projecting to the opposite half of the cerebellum through the middle cerebellar peduncle. 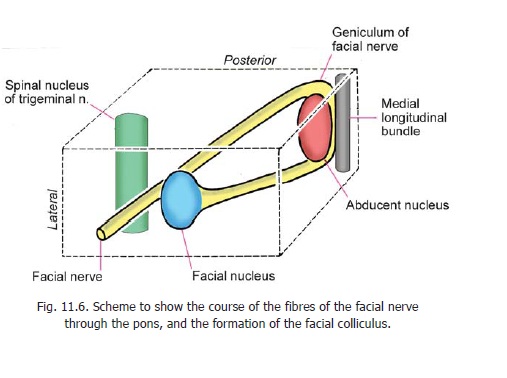 The pontine nuclei (or nuclei pontis) receive corticopontine fibres from the frontal, temporal, parietal and occipital lobes of the cerebrum. Their efferents form the transverse fibres of the pons. We have seen that most of these fibres cross to the opposite side, but some may end ipsilaterally.

It has been estimated that there are about twenty million neurons in pontine nuclei. Most of  them are glutaminergic About 5% are GABAergic and are inhibitory.

The dorsal part of the pons is occupied,predominantly, by the reticular formation. Its posterior surface helps to form the floor of the fourth ventricle. This surface is lined by grey matter and is related to some cranial nerve nuclei. The dorsal part is bounded laterally by the inferior cerebellar peduncle in the lower part of the pons, and by the superior cerebellar peduncle in the upper part. The region adjoining the ventral part (of the pons) is occupied by important ascending tracts. The medial lemniscus occupies a transversely elongated oval area next to the middle line. Lateral to this are the trigeminal lemniscus and the spinal lemniscus (lateral spinothalamic tract). The fibres of the spinotectal tract run along with the spinal lemniscus, while those of the ventral spinothalamic tract lie within the medial lemniscus. Still more laterally, there is the lateral lemniscus. Ventral to these lemnisci there are conspicuous transversely running fibres that form the trapezoid body. The ventral spinocerebellar tract lies ventromedial to the inferior cerebellar peduncle in the lower part of the pons (Fig. 11.5). In the upper part of the pons 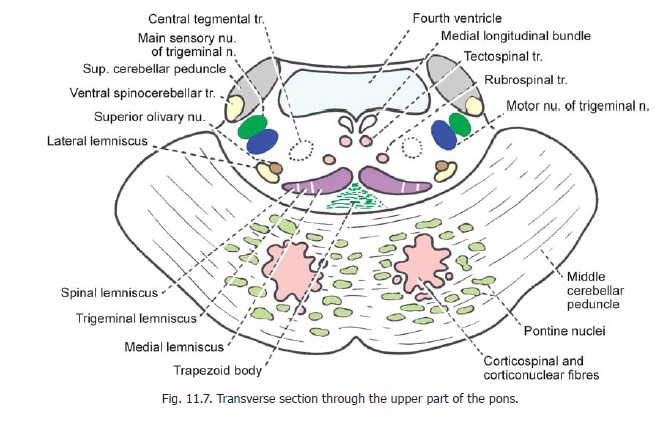 it is seen within the superior cerebellar peduncle (Fig. 11.7). Descending tracts passing through the dorsal part of the pons are the tectospinal tract and the rubrospinal tract. The medial longitudinal fasciculus lies dorsally near the middle line.

Section through the lower part of the pons

This secton (Fig. 11.5) shows two cranial nerve nuclei that are closely related to the floor of the fourth ventricle. These are the abducent nucleus lying medially and the vestibular nuclei that lie laterally. At a deeper level in the lateral part of the reticular formation two additional nuclei are seen. These are the spinal nucleus of the trigeminal nerve (along with its tract) lying laterally, and the facial nucleus lying medially. The dorsal and ventral cochlear nuclei lie dorsal and ventral, respectively, to the inferior cerebellar peduncle. 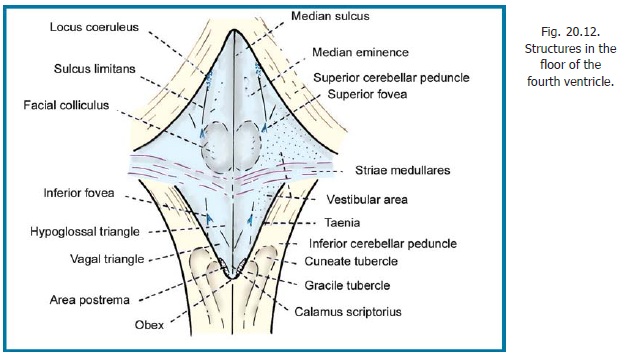 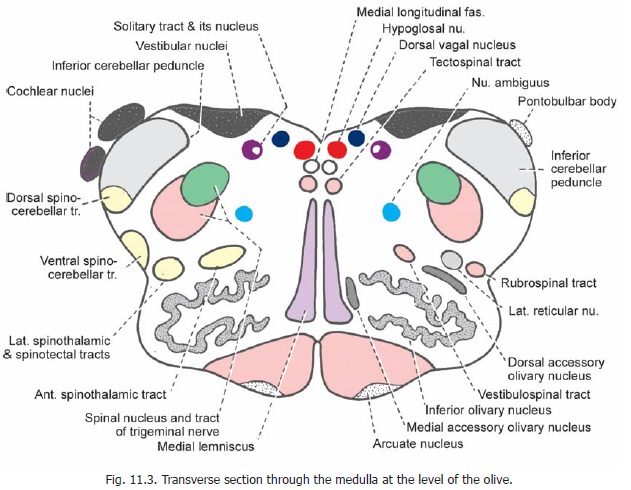 Other masses of grey matter to be seen in the lower part of the pons are the superior olivarycomplex (made up of several nuclei) which lies dorsomedial to the lateral lemniscus, and the nucleiof the trapezoid body which consist of scattered cells lying within this body.

Section through the upper part of the pons

At this level (Fig. 11.7) the dorsal part is bounded laterally by the superior cerebellar peduncles. Medial to each peduncle there is the main sensory nucleus of the trigeminal nerve, and further medially there is the motor nucleus of the same nerve. The superior olivary nucleus extends to this level, but is less prominent; while the lateral lemniscus forms a more conspicuous bundle. Some fibres of the trapezoid body can be seen ventral to the medial lemniscus.