The respiratory center is composed of several groups of neurons located bilat-erally in the medulla oblongata and pons of the brain stem, as .

Transport of Carbon Dioxide in the Blood

Chemical Forms in Which Carbon Dioxide Is Transported 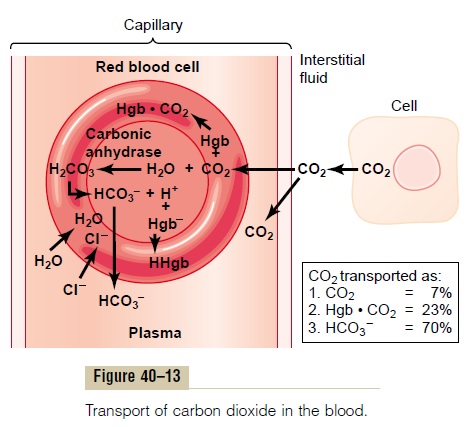 Transport of Carbon Dioxide in the Form of Bicarbonate Ion Reaction of Carbon Dioxide with Water in the Red Blood Cells—Effect of Carbonic Anhydrase. The dis-solved carbon dioxide in the blood reacts with water to form carbonic acid. This reaction would occur much too slowly to be of importance were it not for the fact that inside the red blood cells is a protein enzyme called carbonic anhydrase, which catalyzes the reaction between carbon dioxide and water and accel-erates its reaction rate about 5000-fold. Therefore, instead of requiring many seconds or minutes to occur, as is true in the plasma, the reaction occurs so rapidly in the red blood cells that it reaches almost complete equilibrium within a very small fraction of a second. This allows tremendous amounts of carbon dioxide to react with the red blood cell water even before the blood leaves the tissue capillaries.

Dissociation  of  Carbonic Acid  into  Bicarbonate  and Hydrogen Ions. In another fraction of a second, thecarbonic acid formed in the red cells (H2CO3) disso-ciates into hydrogen and bicarbonate ions (H+ and HCO3–). Most of the hydrogen ions then combine with the hemoglobin in the red blood cells, because the hemoglobin protein is a powerful acid-base buffer. In turn, many of the bicarbonate ions diffuse from the red cells into the plasma, while chloride ions diffuse into the red cells to take their place. This is made possible by the presence of a special bicarbonate-chloridecarrier protein in the red cell membrane that shuttlesthese two ions in opposite directions at rapid veloci-ties. Thus, the chloride content of venous red blood cells is greater than that of arterial red cells, a phe-nomenon called the chloride shift. 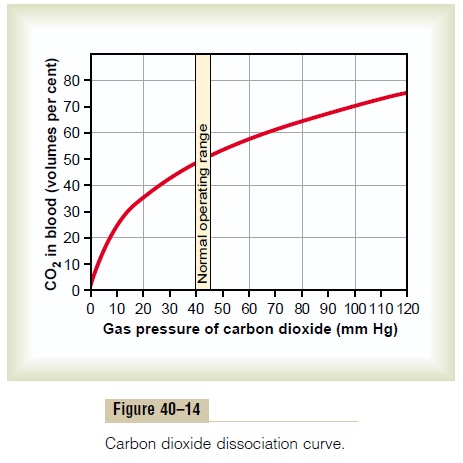 When Oxygen Binds with Hemoglobin, Carbon Dioxide Is Released (the Haldane Effect) to Increase CO2Transport

Earlier, it was pointed out that an increase in carbon dioxide in the blood causes oxygen to be displaced from the hemoglobin (the Bohr effect), which is an important factor in increasing oxygen transport. The reverse is also true: binding of oxygen with hemoglobin tends to displace carbon dioxide from the blood. Indeed, this effect, called the Haldaneeffect, is quantitatively far more important in promoting carbon dioxide transport than is the Bohr effect in promoting oxygen transport. 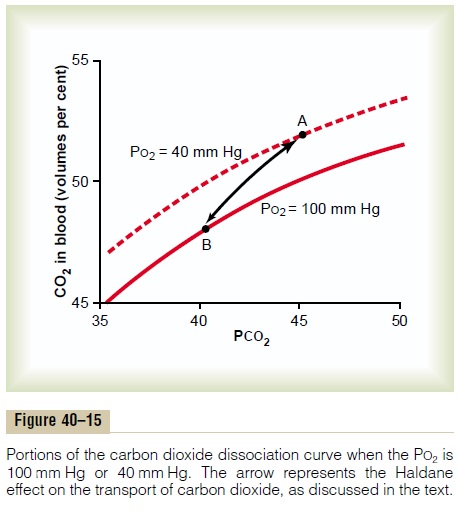 The carbonic acid formed when carbon dioxide enters the blood in the peripheral tissues decreases the blood pH. However, reaction of this acid with the acid-base buffers of the blood prevents the hydrogen ion concen-tration from rising greatly (and the pH from falling greatly). Ordinarily, arterial blood has a pH of about 7.41, and as the blood acquires carbon dioxide in the tissue capillaries, the pH falls to a venous value of about 7.37. In other words, a pH change of 0.04 unit takes place. The reverse occurs when carbon dioxide is released from the blood in the lungs, with the pH rising to the arterial value of 7.41 once again. In heavy exer-cise or other conditions of high metabolic activity, or when blood flow through the tissues is sluggish, the decrease in pH in the tissue blood (and in the tissues themselves) can be as much as 0.50, about 12 times normal, thus causing significant tissue acidosis.