The ultimate goal of respiration is to maintain proper concentrations of oxygen, carbon dioxide, and hydro-gen ions in the tissues.

The ultimate goal of respiration is to maintain proper concentrations of oxygen, carbon dioxide, and hydro-gen ions in the tissues. It is fortunate, therefore, that respiratory activity is highly responsive to changes in each of these.

Excess carbon dioxide or excess hydrogen ions in the blood mainly act directly on the respiratory center itself, causing greatly increased strength of both the inspiratory and the expiratory motor signals to the respiratory muscles.

Let us discuss first the stimulation of the respiratory center itself by carbon dioxide and hydrogen ions.

Chemosensitive Area of the Respiratory Center. We have dis-cussed mainly three areas of the respiratory center: the dorsal respiratory group of neurons, the ventral respiratory group, and the pneumotaxic center. It is believed that none of these is affected directly by changes in blood carbon dioxide concentration or hydrogen ion concentration. Instead, an additional neuronal area, a chemosensitive area, shown in Figure 41–2, is located bilaterally, lying only 0.2 millimeter beneath the ventral surface of the medulla. This area is highly sensitive to changes in either blood PCO2 or hydrogen ion concentration, and it in turn excites the other portions of the respiratory center. 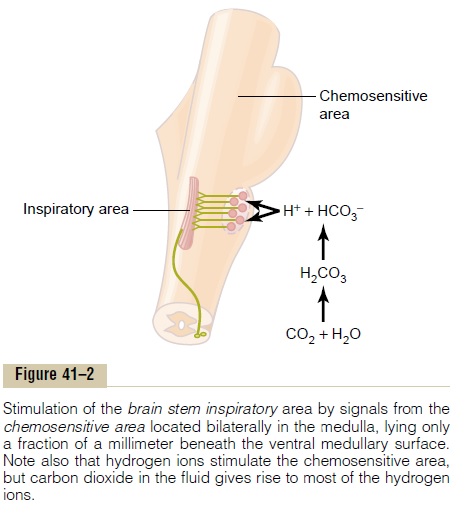 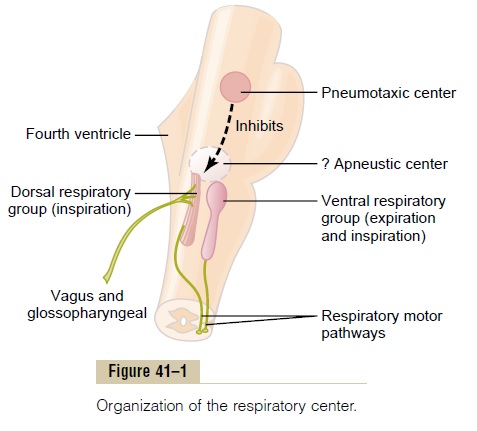 Although carbon dioxide has little direct effect in stimulating the neurons in the chemosensitive area, it does have a potent indirect effect. It does this by react-ing with the water of the tissues to form carbonic acid, which dissociates into hydrogen and bicarbonate ions; the hydrogen ions then have a potent direct stimula-tory effect on respiration. These reactions are shown in Figure 41–2.

Decreased Stimulatory Effect of Carbon Dioxide After the First 1 to 2 Days. Excitation of the respiratory center bycarbon dioxide is great the first few hours after the blood carbon dioxide first increases, but then it grad-ually declines over the next 1 to 2 days, decreasing to about one fifth the initial effect. Part of this decline results from renal readjustment of the hydrogen ion concentration in the circulating blood back toward normal after the carbon dioxide first increases the hydrogen concentration. The kidneys achieve this by increasing the blood bicarbonate, which binds with the hydrogen ions in the blood and cerebrospinal fluid to reduce their concentrations. But even more important, over a period of hours, the bicarbonate ions also slowly diffuse through the blood-brain and blood– cerebrospinal fluid barriers and combine directly with the hydrogen ions adjacent to the respiratory neurons as well, thus reducing the hydrogen ions back to near normal. A change in blood carbon dioxide concentra-tion therefore has a potent acute effect on controlling respiratory drive but only a weak chronic effect after a few days’ adaptation.

Quantitative Effects of Blood PCO2 and Hydrogen Ion Concentration on Alveolar Ventilation Figure 41–3 shows quantitatively the approximate effects of blood PCO2 and blood pH (which is an inverse logarithmic measure of hydrogen ion concen-tration) on alveolar ventilation. Note especially the very marked increase in ventilation caused by an increase in PCO2in the normal range between 35 and 75 mm Hg. This demonstrates the tremendous effect that carbon dioxide changes have in controlling respi-ration. By contrast, the change in respiration in the normal blood pH range between 7.3 and 7.5 is less than one tenth as great. 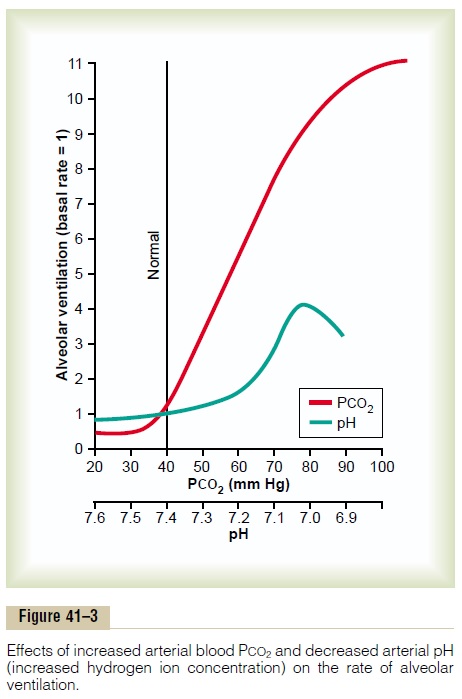 Unimportance of Oxygen for Control of the Respiratory Center Changes in oxygen concentration have virtually no direct effect on the respiratory center itself to alterrespiratory drive (although oxygen changes do have an indirect effect, acting through the peripheral chemoreceptors).

We learned that the hemoglobin-oxygen buffer system delivers almost exactly normal amounts of oxygen to the tissues even when the pul-monary PO2 changes from a value as low as 60 mm Hg up to a value as high as 1000 mm Hg. Therefore, except under special conditions, adequate delivery of oxygen can occur despite changes in lung ventilation ranging from slightly below one half normal to as high as 20 or more times normal. This is not true for carbon dioxide, because both the blood and tissue PCO2 changes inversely with the rate of pulmonary ventilation; thus, the processes of animal evolution have made carbon dioxide the major controller of respiration, not oxygen.

Yet, for those special conditions in which the tissues get into trouble for lack of oxygen, the body has a special mechanism for respiratory control located in the peripheral chemoreceptors, outside the brain res-piratory center; this mechanism responds when the blood oxygen falls too low, mainly below a PO2 of 70 mm Hg.