Other Factors That Affect Respiration

Voluntary Control of Respiration. Thus far, we have dis-cussed the involuntary system for the control of respi-ration.

Other Factors That Affect Respiration

Voluntary Control of Respiration. Thus far, we have dis-cussed the involuntary system for the control of respi-ration. However, we all know that for short periods of time, respiration can be controlled voluntarily and that one can hyperventilate or hypoventilate to such an extent that serious derangements in PCO2, pH, and PO2 can occur in the blood.

Effect of Irritant Receptors in the Airways. The epithelium ofthe trachea, bronchi, and bronchioles is supplied with sensory nerve endings called pulmonary irritant recep-tors that are stimulated by many incidents. These causecoughing and sneezing. They may also cause bronchial constriction in such diseases as asthma and emphysema.

Function of Lung “J Receptors.” A few sensory nerveendings have been described in the alveolar walls in juxtaposition to the pulmonary capillaries—hence thename “J receptors.”They are stimulated especially when the pulmonary capillaries become engorged with blood or when pulmonary edema occurs in such conditions as congestive heart failure. Although the functional role of the J receptors is not clear, their excitation may give the person a feeling of dyspnea.

Effect of Brain Edema. The activity of the respiratorycenter may be depressed or even inactivated by acute brain edema resulting from brain concussion. For instance, the head might be struck against some solid object, after which the damaged brain tissues swell, compressing the cerebral arteries against the cranial vault and thus partially blocking cerebral blood supply.

Occasionally, respiratory depression resulting from brain edema can be relieved temporarily by intravenous injection of hypertonic solutions such as highly concen-trated mannitol solution. These solutions osmotically remove some of the fluids of the brain, thus relieving intracranial pressure and sometimes re-establishing res-piration within a few minutes.

An abnormality of respiration called periodic breathing occurs in a number of disease conditions. The person breathes deeply for a short interval and then breathes slightly or not at all for an additional interval, with the cycle repeating itself over and over. One type of peri-odic breathing, Cheyne-Stokes breathing, is character-ized by slowly waxing and waning respiration occur-ring about every 40 to 60 seconds, as illustrated in Figure 41–11. 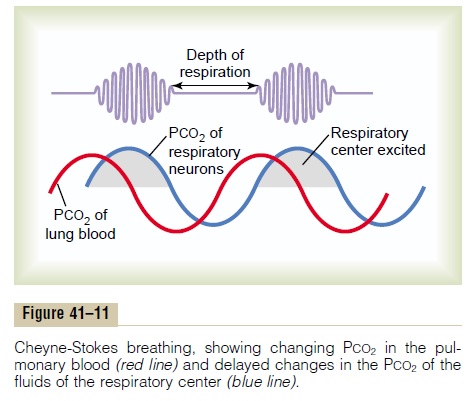 Basic Mechanism of Cheyne-Stokes Breathing. The basiccause of Cheyne-Stokes breathing is the following: When a person overbreathes, thus blowing off too much carbon dioxide from the pulmonary blood while at the same time increasing blood oxygen, it takes several seconds before the changed pulmonary blood can be transported to the brain and inhibit the excess ventila-tion. By this time, the person has already overventilated for an extra few seconds. Therefore, when the overven-tilated blood finally reaches the brain respiratory center, the center becomes depressed an excessive amount. Then the opposite cycle begins. That is, carbon dioxide increases and oxygen decreases in the alveoli. Again, it takes a few seconds before the brain can respond to these new changes. When the brain does respond, the person breathes hard once again, and the cycle repeats.

The basic cause of Cheyne-Stokes breathing occurs in everyone. However, under normal conditions, this mechanism is highly “damped.” That is, the fluids of the blood and the respiratory center control areas have large amounts of dissolved and chemically bound carbon dioxide and oxygen.

Therefore, normally, the lungs cannot build up enough extra carbon dioxide or depress the oxygen sufficiently in a few seconds to cause the next cycle of the periodic breathing. But under two separate conditions, the damping factors can be over-ridden, and Cheyne-Stokes breathing does occur:

1.     When a long delay occurs for transport of bloodfrom the lungs to the brain, changes in carbondioxide and oxygen in the alveoli can continue for many more seconds than usual. Under these conditions, the storage capacities of the alveoli and pulmonary blood for these gases are exceeded; then, after a few more seconds, the periodic respiratory drive becomes extreme, and Cheyne-Stokes breathing begins. This type of Cheyne-Stokes breathing often occurs in patients with severe cardiac failure because blood flow is slow,thus delaying the transport of blood gases from the lungs to the brain. In fact, in patients with chronic heart failure, Cheyne-Stokes breathing can sometimes occur on and off for months.

The term apnea means absence of spontaneous breathing. Occasional apneas occur during normal sleep, but in persons with sleep apnea, the frequency and duration are greatly increased, with episodes of apnea lasting for 10 seconds or longer and occurring 300 to 500 times each night. Sleep apneas can be caused by obstruction of the upper airways, especially the pharynx, or by impaired central nervous system respiratory drive.

Obstructive Sleep Apnea Is Caused by Blockage of the Upper Airway. The muscles of the pharynx normally keep thispassage open to allow air to flow into the lungs during inspiration. During sleep, these muscles usually relax, but the airway passage remains open enough to permit adequate airflow. Some individuals have an especially narrow passage, and relaxation of these muscles during sleep causes the pharynx to completely close so that air cannot flow into the lungs.

In persons with sleep apnea, loud snoring and laboredbreathing occur soon after falling asleep. The snoringproceeds, often becoming louder, and is then inter-rupted by a long silent period during which no breath-ing (apnea) occurs. These periods of apnea result in significant decreases in PO2 and increases in PCO2, which greatly stimulate respiration. This, in turn, causes sudden attempts to breathe, which result in loud snorts and gasps followed by snoring and repeated episodes of apnea. The periods of apnea and labored breathing are repeated several hundred times during the night, result-ing in fragmented, restless sleep. Therefore, patients with sleep apnea usually have excessive daytime drowsi-ness as well as other disorders, including increased sym-pathetic activity, high heart rates, pulmonary and systemic hypertension, and a greatly elevated risk for cardiovascular disease.

Obstructive sleep apnea most commonly occurs in older, obese persons in whom there is increased fat dep-osition in the soft tissues of the pharynx or compression of the pharynx due to excessive fat masses in the neck. In a few individuals, sleep apnea may be associated with nasal obstruction, a very large tongue, enlarged tonsils, or certain shapes of the palate that greatly increase resistance to the flow of air to the lungs during inspira-tion. The most common treatments of obstructive sleep apnea include (1) surgery to remove excess fat tissue at the back of the throat (a procedure called uvu-lopalatopharyngoplasty), to remove enlarged tonsils oradenoids, or to create an opening in the trachea (tra-cheostomy) to bypass the obstructed airway during sleep, and (2) nasal ventilation with continuous positiveairway pressure (CPAP).

“Central” Sleep Apnea Occurs When the Neural Drive to Respira- tory Muscles Is Transiently Abolished. In a few personswith sleep apnea, the central nervous system drive to the ventilatory muscles transiently ceases. Disorders that can cause cessation of the ventilatory drive during sleep include damage to the central respiratory centersor abnormalities of the respiratory neuromuscular appa-ratus. Patients affected by central sleep apnea may havedecreased ventilation when they are awake, although they are fully capable of normal voluntary breathing. During sleep, their breathing disorders usually worsen, resulting in more frequent episodes of apnea that decrease PO2 and increase PCO2 until a critical level is reached that eventually stimulates respiration. These transient instabilities of respiration cause restless sleep and clinical features similar to those observed in obstructive sleep apnea.