Regulation of Respiration During Exercise

In strenuous exercise, oxygen consumption and carbon dioxide formation can increase as much as 20-fold.Yet,.

Regulation of Respiration During Exercise

In strenuous exercise, oxygen consumption and carbon dioxide formation can increase as much as 20-fold.Yet, as illustrated in Figure 41–8, in the healthy athlete, alveolar ventilation ordinarily increases almost exactly in step with the increased level of oxygen metabolism. The arterial PO2, PCO2, and pH remain almost exactlynormal. 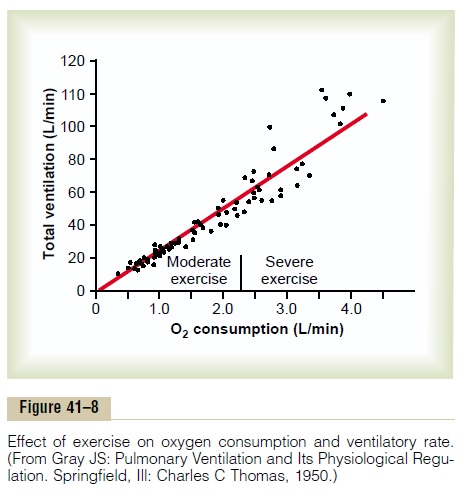 In trying to analyze what causes the increased ven-tilation during exercise, one is tempted to ascribe this to increases in blood carbon dioxide and hydrogen ions, plus a decrease in blood oxygen. However, this is questionable, because measurements of arterial PCO2, pH, and PO2 show that none of these values changes significantly during exercise, so that none of them becomes abnormal enough to stimulate respiration. Therefore, the question must be asked: What causes intense ventilation during exercise? At least one effect seems to be predominant. The brain, on transmitting motor impulses to the exercising muscles, is believed to transmit at the same time collateral impulses into the brain stem to excite the respiratory center. This is analogous to the stimulation of the vasomotor center of the brain stem during exercise that causes a simul-taneous increase in arterial pressure.

Actually, when a person begins to exercise, a large share of the total increase in ventilation begins imme-diately on initiation of the exercise, before any blood chemicals have had time to change. It is likely that most of the increase in respiration results from neuro-genic signals transmitted directly into the brain stem respiratory center at the same time that signals go to the body muscles to cause muscle contraction.

Interrelation Between Chemical Factors and Nervous: Factors in the Control of Respiration During Exercise. When aperson exercises, direct nervous signals presumably stimulate the respiratory center almost the proper amount to supply the extra oxygen required for exer-cise and to blow off extra carbon dioxide. Occasion-ally, however, the nervous respiratory control signals are either too strong or too weak. Then chemical factors play a significant role in bringing about the final adjustment of respiration required to keep the oxygen, carbon dioxide, and hydrogen ion concentra-tions of the body fluids as nearly normal as possible. This is demonstrated in Figure 41–9, which shows in the lower curve changes in alveolar ventilation during a 1-minute period of exercise and in the upper curve changes in arterial PCO2. Note that at the onset of exer-cise, the alveolar ventilation increases instantaneously, without an initial increase in arterial PCO2. In fact, this 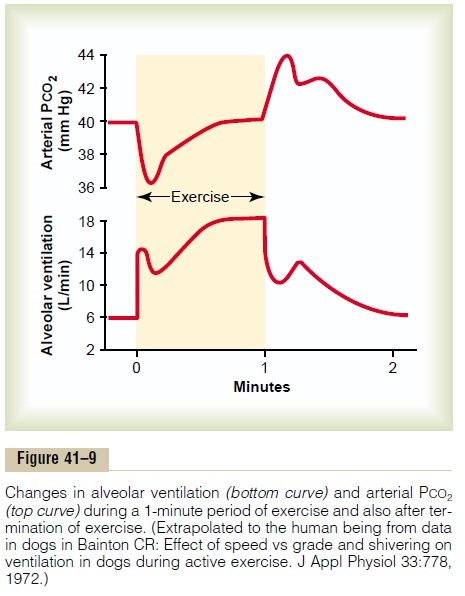 increase in ventilation is usually great enough so that at first it actually decreases arterial PCO2 below normal, as shown in the figure. The presumed reason that the ventilation forges ahead of the buildup of blood carbon dioxide is that the brain provides an “anticipa-tory” stimulation of respiration at the onset of exer-cise, causing extra alveolar ventilation even before it is needed. However, after about 30 to 40 seconds, the amount of carbon dioxide released into the blood from the active muscles approximately matches the increased rate of ventilation, and the arterial PCO2 returns essentially to normal even as the exercise con-tinues, as shown toward the end of the 1-minute period of exercise in the figure. 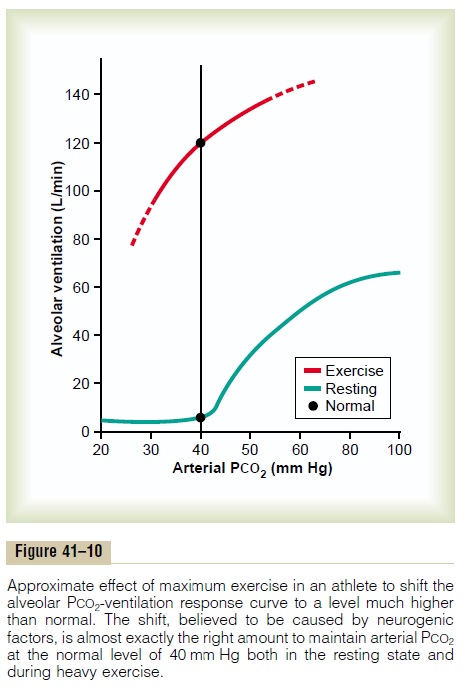 Figure 41–10 summarizes the control of respiration during exercise in still another way, this time more quantitatively. The lower curve of this figure shows the effect of different levels of arterial PCO2 on alveolar ventilation when the body is at rest—that is, not exer-cising. The upper curve shows the approximate shift of this ventilatory curve caused by neurogenic drive from the respiratory center that occurs during heavy exer-cise. The points indicated on the two curves show the arterial PCO2 first in the resting state and then in the exercising state. Note in both instances that the PCO2 is at the normal level of 40 mm Hg. In other words, the neurogenic factor shifts the curve about 20-fold in the upward direction, so that ventilation almost matches the rate of carbon dioxide release, thus keeping arte-rial PCO2 near its normal value. The upper curve of Figure 41–10 also shows that if, during exercise, the arterial PCO2does change from its normal value of 40 mm Hg, it has an extra stimulatory effect on venti-lation at a PCO2 greater than 40 mm Hg and a depres-sant effect at a PCO2 less than 40 mm Hg.

Possibility That the Neurogenic Factor for Control of Ventila-tion During Exercise Is a Learned Response. Many experi-ments suggest that the brain’s ability to shift the ventilatory response curve during exercise, as shown in Figure 41–10, is at least partly a learned response. That is, with repeated periods of exercise, the brain becomes progressively more able to provide the proper signals required to keep the blood PCO2 at its normal level. Also, there is reason to believe that even the cerebral cortex is involved in this learning, because experiments that block only the cortex also block the learned response.