In addition to control of respiratory activity by the res-piratory center itself, still another mechanism is avail-able for controlling respiration.

In addition to control of respiratory activity by the res-piratory center itself, still another mechanism is avail-able for controlling respiration. This is the peripheralchemoreceptor system, shown in Figure 41–4. Specialnervous chemical receptors, calledchemoreceptors, are located in several areas outside the brain. They are especially important for detecting changes in oxygen in the blood, although they also respond to a lesser extent to changes in carbon dioxide and hydrogen ion concentrations. The chemoreceptors transmit nervous signals to the respiratory center in the brain to help regulate respiratory activity.

Most of the chemoreceptors are in the carotidbodies. However, a few are also in the aortic bodies, shown in the lower part of Figure 41–4, and a very few are located elsewhere in association with other arter-ies of the thoracic and abdominal regions. 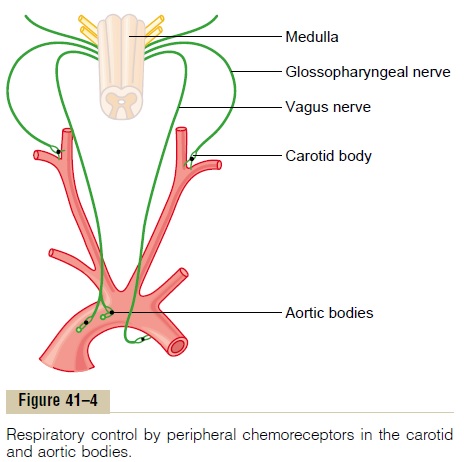 The carotid bodies are located bilaterally in the bifurcations of the common carotid arteries. Their afferent nerve fibers pass through Hering’s nerves to the glossopharyngeal nerves and then to the dorsal respiratory area of the medulla. The aortic bodies are located along the arch of the aorta; their afferent nerve fibers pass through the vagi, also to the dorsal medullary respiratory area.

Each of the chemoreceptor bodies receives its own special blood supply through a minute artery directly from the adjacent arterial trunk. Further, blood flow through these bodies is extreme, 20 times the weight of the bodies themselves each minute. Therefore, the percentage of oxygen removed from the flowing blood is virtually zero. This means that the chemoreceptors are exposed at all times to arterial blood, not venousblood, and their PO2s are arterial PO2s.

Stimulationof  the Chemoreceptors by Decreased Arterial Oxygen. When the oxygen concentration in the arterialblood falls below normal, the chemoreceptors become strongly stimulated. This is demonstrated in Figure 41–5, which shows the effect of different levels of arte-rial PO2on the rate of nerve impulse transmission froma carotid body. Note that the impulse rate is particu-larly sensitive to changes in arterial PO2 in the range of 60 down to 30 mm Hg, a range in which hemoglobin saturation with oxygen decreases rapidly. 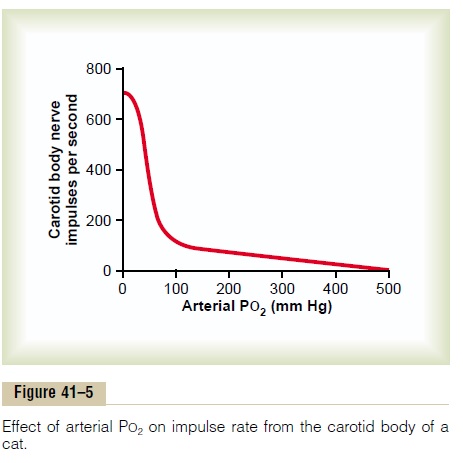 Figure 41–6 shows the effect of low arterial PO2 on alveolar ventilation when the PCO2 and the hydrogen ion concentration are kept constant at their normal levels. In other words, in this figure, only the ventila-tory drive due to the effect of low oxygen on the chemoreceptors is active. The figure shows almost no effect on ventilation as long as the arterial PO2 remains greater than 100 mm Hg. But at pressures lower than 100 mm Hg, ventilation approximately doubles when the arterial PO2 falls to 60 mm Hg and can increase as much as fivefold at very low PO2s. Under these condi-tions, low arterial PO2 obviously drives the ventilatory process quite strongly. 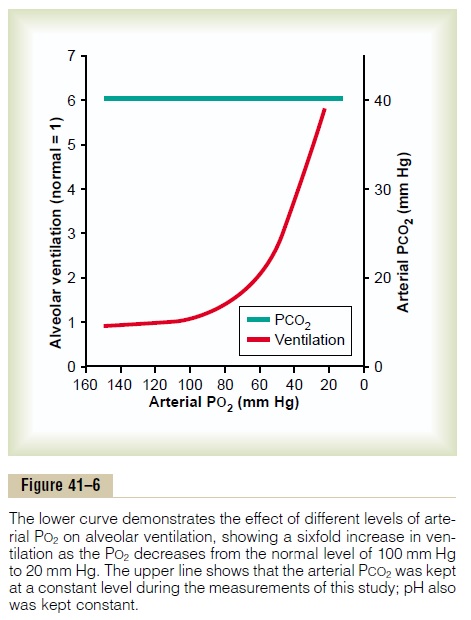 Mountain climbers have found that when they ascend a mountain slowly, over a period of days rather than a period of hours, they breathe much more deeply and therefore can withstand far lower atmospheric oxygen concentrations than when they ascend rapidly. This is called acclimatization.

The reason for acclimatization is that, within 2 to 3 days, the respiratory center in the brain stem loses about four fifths of its sensitivity to changes in PCO2 and hydrogen ions. Therefore, the excess ventilatory blow-off of carbon dioxide that normally would inhibit an increase in respiration fails to occur, and low oxygen can drive the respiratory system to a much higher level of alveolar ventilation than under acute conditions. Instead of the 70 per cent increase in ven-tilation that might occur after acute exposure to low oxygen, the alveolar ventilation often increases 400 to 500 per cent after 2 to 3 days of low oxygen; this helps immensely in supplying additional oxygen to the mountain climber.

Composite Effects of PCO2, pH, and PO2 on Alveolar Ventilation

Figure 41–7 gives a quick overview of the manner in which the chemical factors PO2, PCO2, and pH— together—affect alveolar ventilation. To understand this diagram, first observe the four red curves. These curves were recorded at different levels of arterial PO2—40 mm Hg, 50 mm Hg, 60 mm Hg, and 100 mm Hg. For each of these curves, the PCO2 was changed from lower to higher levels. Thus, this “family” of red curves represents the combined effects of alveolar PCO2 and PO2 on ventilation. 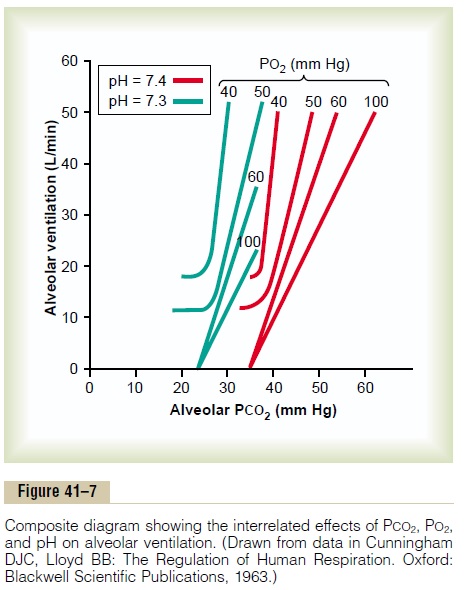 Now observe the green curves. The red curves were measured at a blood pH of 7.4; the green curves were measured at a pH of 7.3. We now have two families of curves representing the combined effects of PCO2 and PO2 on ventilation at two different pH values. Still other families of curves would be displaced to the right at higher pHs and displaced to the left at lower pHs. Thus, using this diagram, one can predict the level of alveolar ventilation for most combinations of alveolar PCO2, alveolar PO2, and arterial pH.