The teacher was discussing about the pollution caused by the vehicles. The students said that they saw many vehicles when they were standing in the bus stop while coming to school.

The teacher was discussing about the pollution caused by the vehicles. The students said that they saw many vehicles when they were standing in the bus stop while coming to school. Everyone described in their own way, but Azhagi drew the pictures of the vehicles that she had seen, as shown below.

All the students were able to easily understand that Azhagi had seen 5 cars, 3 lorries and 2 buses. This sort of representation of data using pictures is called Pictograph.

● The data can be easily analyzed and interpreted.

● The pictures and symbols help us to understand better.

A pictograph is the representation of data through pictures.

● The pictograph is a pictorial representation for a word or Phrase.

● A pictograph is also called Pictogram.

● Pictographs were used as the earliest known form of writing examples having been discovered in Egypt and Mesopotomia since 3000 BC.

1. Need for scaling in the Pictograph

Fig. 5.4 shows, a fruit stall where there are 40 mangoes, 55 apples, 35 oranges and 60 bananas. How can we represent this data by using pictures? If the data is very large, it is very difficult and time consuming to represent each of the fruits in a pictograph. In such cases, we can use one picture to represent many of the same kind. This is called scaling. 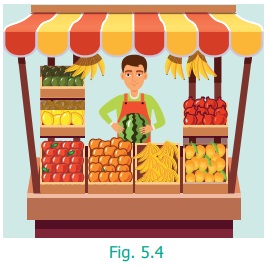 The pictograph can be drawn for the above data as shown below. 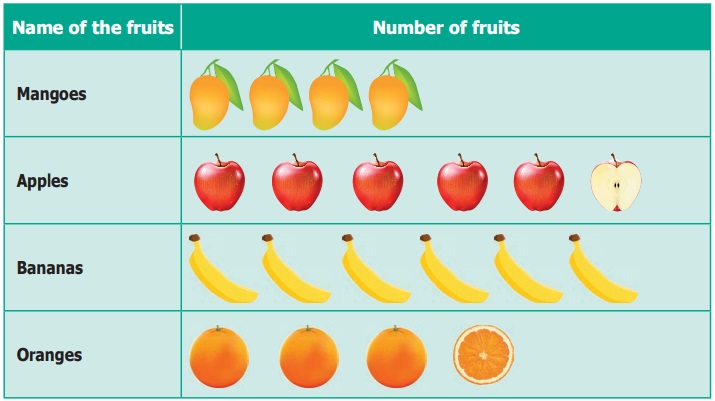 From the above pictograph the number of fruits can be calculated very easily.

The following table shows the number of vehicles sold in a year. 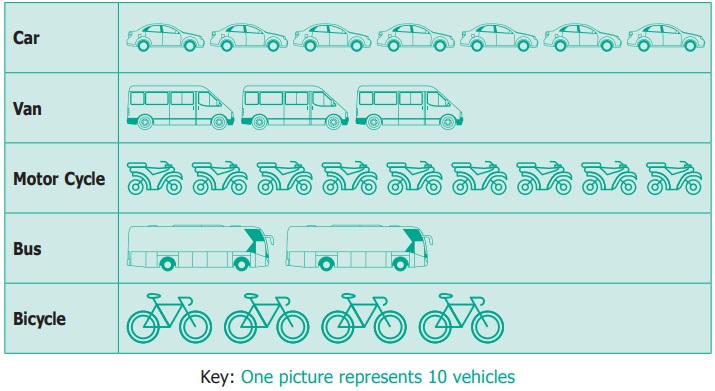 Look at the pictograph and answer the following questions.

(i) How many motor cycles were sold in a year?

(iii) How many bicycles were sold ?

(iv) How many cars and vans were sold?

(v) How many vehicles were sold altogether?

The pictograph shows the number of branded mobile phones sold in five months. 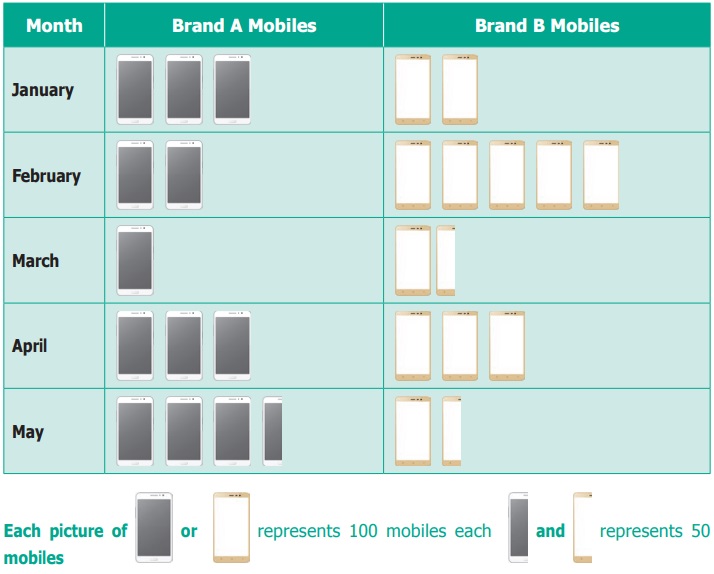 Observe the given table and answer the following questions.

(i) In which month was the maximum number of brand B mobiles sold?

(ii) In which month was equal number of brand A and brand B mobiles sold?

(iii) In which month was the minimum number of brand A mobiles sold?

(iv) Find the total number of Brand A Mobiles that were sold in 5 months.

(v) What is the difference between the sale of brand A and brand B Mobiles in the month of May?

(v) Brand A has sold 200 mobiles more than brand B

Collect from class VI students data regarding games they like and then draw a pictograph for the data collected.