Computations in DP are done recursively, so that the optimum solution of one subproblem is used as an input to the next subproblem.

RECURSIVE NATURE OF COMPUTATIONS IN DP

Suppose that you want to select the shortest highway route between two cities. The network in Figure 10.1 provides the possible routes between the starting city at node 1 and the destination city at node 7. The routes pass through intermediate cities designated by nodes 2 to 6.

We can solve this problem by exhaustively enumerating all the routes between nodes 1 and 7 (there are five such routes). However, in a large network, exhaustive enumeration may be intractable computationally. '

To solve the problem by DP, we first decompose it into stages as delineated by the vertical dashed lines in Figure 10.2. Next, we carry out the computations for each stage separately. 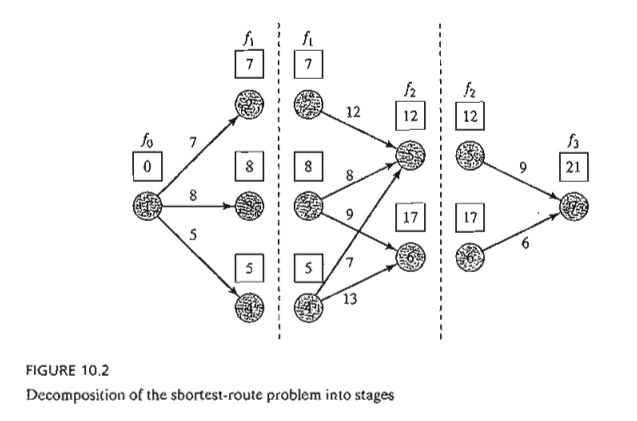 The general idea for determining the shortest route is to compute the shortest (cumulative) distances to all the terminal nodes of a stage and then use these distances as input data to the immediately succeeding stage. Starting from node 1, stage 1 includes three end nodes (2,3, and 4) and its computations are simple.

The last step is to consider stage 3. The destination node 7 can be reached from either nodes 5 or 6. Using the summary results from stage 2 and the distances from nodes 5 and 6 to node 7, we get

The example reveals the basic properties of computations in DP:

a)     The computations at each stage are a function of the feasible routes of that stage, and that stage alone.

Recursive Equation. We now show how the recursive computations in Example 10.1-1 can be expressed mathematically. Let fi(xi) be the shortest distance to node xi at stage 4 and define d(xi-1, xi) as the distance from node xi-l to node xi, then fi is computed from fi-1 using the following recursive equation:

Starting at i = 1, the recursion sets fo(xo) = 0. The equation shows that the shortest distances fi(xj) at stage i must be expressed in terms of the next node, xi. In the DP terminology, xi is referred to as the state of the system at stage i. In effect, the state of the system at stage i is the information that links the stages together, so that optimal decisions for the remaining stages can be made without reexamining how the decisions for the previous stages are reached. The proper definition of the state allows us to consider each stage separately and guarantee that the solution is feasible for all the stages.

The definition of the state leads to the following unifying framework for DP.

Future decisions for the remaining stages will constitute an optimal policy regardless of the policy adopted in previous stages.

The implementation of the principle is evident in the computations in Example 10.1-1. For example, in stage 3, we only use the shortest distances to nodes 5 and 6, and do not concern ourselves with how these nodes are reached from node 1. Although the principle of optimality is "vague" about the details of how each stage is optimized, its application greatly facilitates the solution of many complex problems.

2. I am an avid hiker. Last summer, I went with my friend G. Don on a 5-day hike-and-camp trip in the beautiful White Mountains in New Hampshire. We decided to limit our hiking to an area comprising three well-known peaks: Mounts Washington, Jefferson, and Adams. Mount Washington has a 6-mile base-to-peak trail. The corresponding base-ta-peak trails for Mounts Jefferson and Adams are 4 and 5 miles, respectively. The trails joining the bases of the three mountains are 3 miles between Mounts Washington and Jefferson, 2 miles between Mounts Jefferson and Adams, and 5 miles between Mounts Adams and Washington. We started on the first day at the base of Mount Washington and returned to the same spot at the end of 5 days. Our goal was to hike as many miles as we could. We also decided to climb exactly one mountain each day and to camp at the base of the moun-tain we would be climbing the next day. Additionally, we decided that the same mountain could not be visited in any two consecutive days. How did we schedule our hike?