The efficient operation of railways depends on the reliability and availability of locomotives. The proper and efficient maintenance of locomotive is the basis for economical train operation. Maintenance practices have evolved on the basic principle that necessary attention should be paid to all assets before deterioration through wear and tear makes them prone to failure. This is known as preventive maintenance.

The efficient operation of railways depends on the reliability and availability of locomotives. The proper and efficient maintenance of locomotive is the basis for economical train operation. Maintenance practices have evolved on the basic principle that necessary attention should be paid to all assets before deterioration through wear and tear makes them prone to failure. This is known as preventive maintenance. The preventive maintenance of locomotives can be broadly classified under two heads, namely, periodical overhaul and schedule repairs.

The prescribed life of steam and diesel locomotives is 40 and 36 years, respectively. In view of the long lifespan, it is imperative that both these assets are properly and periodically maintained to ensure that there is no deterioration in their condition. The preventive maintenance of steam and diesel locomotives is done in the following manner.

During POH, the loco is completely stripped and all its parts and components are repaired and/or replaced, as their condition warrants. After POH, the locomotives are in an 'almost new' condition.

Various examination schedules have been drawn up as a part of preventive maintenance so that specific components and parts of the locomotives may be given need-based attention at intervals. The examination schedules list all the various aspects that should be taken care of at the time of maintenance, which are dependent on the wear and tear of the components. The total number of kilometres that should have been covered before these examinations can be carried out have also been specified:

These preventive maintenance schedules have been worked out on the basis of experience and informed investigations into the causes leading to the breakdown of locomotives. Compared to a steam locomotive, the diesel traction unit is far more complex, usually incorporating an indirect control system with much more elaborate ancillary equipment. As a result of this greater complexity, it is more liable to be rendered unserviceable by the failure of a particular component. Therefore, in order to ensure a high standard of reliability, various schedules have been instituted for its inspection and maintenance. The 'servicing' of minor schedules, i.e., trip, fortnightly, monthly, etc., involving routine inspections, minor attention, and the like, takes about 4 to 12 hours. The major schedules take a longer time, lasting from 6 to 14 days, since they require repair and replacement of major components.

The schedules for inspection and checks given in Table 24.7 are generally followed on Indian Railways to ensure the proper maintenance of electric locomotives. 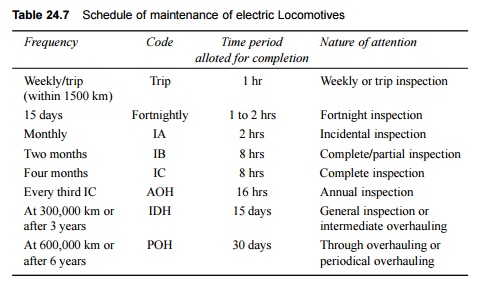 The frequency and duration of various schedules have been defined after taking the several failures of locomotives, the existence of indigenous components, and the atmospheric levels of heat and dust in the country into consideration. Compared to steam and diesel locomotives, electric locomotives include more contactors, relays, and auxiliaries/equipment. Electrical quantities and changes in the condition of the locomotive are not physically visible. Therefore, it is essential to check the equipment, contactors, and relays periodically to ascertain the condition of the various equipment without too much of dismantling. Most of the equipment gets inspected during four monthly inspections and, therefore, these equipment are excluded from the annual inspections. During such inspections, the equipment are disconnected from mechanical fixtures, assemblies are stripped and cleaned, and worn out or damaged parts are replaced and reconnected.

Trip or weekly and fortnightly inspections are conducted at outstation running sheds, and all other schedule inspections, except POH, are carried out at sheds. POH is, however, carried out in the workshops.