The first locomotive, which hauled the first train in India in 1853 from Bombay (now Mumbai) to Thane, was imported from England and was named the Lord Falkland locomotive. The locomotive was of the 2-4-0 type.

The first locomotive, which hauled the first train in India in 1853 from Bombay (now Mumbai) to Thane, was imported from England and was named the Lord Falkland locomotive. The locomotive was of the 2-4-0 type. Since then, more than 5000 types of steam locomotives have been imported or manufactured for different gauges.

Indian Railways standardized the classification of various locomotives in the year 1929. Locomotives are classified by a two-digit code as given in Table 24.2. 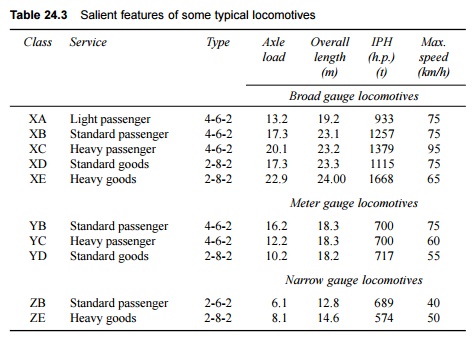 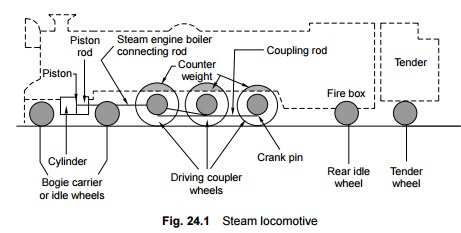 The steam engine consists of a cylinder, piston, and other moving parts. It converts the heat energy of the steam into rotary energy in the following manner.

1.  The steam from the boiler is first admitted into a cylinder fitted with a valve. The valve is operated mechanically.

2.  Steam enters into the cylinder on one side from behind a steam-tight piston that is fitted inside the cylinder. The piston can move forward and backward.

3.  The steam exerts a force of several tonnes on the piston. This force is transmitted to a crank pin fitted out of centre on each wheel (away from the centre of the wheel) through rods and other connections. The linear motion of the piston is converted into rotary motion and the wheel starts rotating.

The locomotive has idle as well as loaded wheels. The frame is supported on the wheels; it carries the boiler and also holds the steam engine and other parts of the locomotive.

A tender is provided behind the locomotive to store fuel. The tender is a type of mini-wagon that is supported on wheels and is coupled with the main locomotive.

The diesel locomotive (Fig. 24.2) works on the principle of a diesel engine. It uses diesel oil as fuel and combustion takes places inside a cylinder. The air inside the cylinder is compressed, raising the temperature of the air. The fuel is injected inside the cylinder, causing spontaneous combustion. The diesel engine mostly comprises of four-stroke cycles consisting of suction, compression, ignition, and exhaust. The energy thus generated is utilized for driving the locomotive.

(a)  Mechanical transmission in the case of conventional diesel locomotives

(b) Hydraulic transmission in the case of diesel-hydraulic locomotives

(c)  Electric transmission in the case of diesel-electric locomotives.

Indian Railways has, however, recently standardized WBM2 diesel locomotives for BG lines and YDM4 diesel locomotives for MG lines. Both these locomotives are of the ALCO design and are currently being manufactured in DLW Varanasi. The WDM2 locomotives have a horsepower of 2600 and are capable of hauling 3600 t of train load at a speed of 72 m/h on a level track. The maximum speed that can be achieved using this locomotive is 120 km/h.

In electric locomotives (Fig. 24.3), movement is brought about by means of electric motors. These motors draw power from an overhead distribution system through pantographs (joined frameworks conveying current to an electric train from overhead wines) mounted on the locomotives. There are different systems for feeding power to these locomotives, namely 1500-V dc, 750-V dc, 25-kV ac single-phase, and ac three-phase. The most economical way of transmitting and distributing power is to directly transmit ac power at industrial frequency, whereas the motors most suited for electric traction are dc series motors. Indian Railways has locomotives that have the best of both systems, i.e., locomotives with dc series motors that collect power at 25 kV ac single-phase at an industrial frequency of 50 cycles. The voltage is stepped down to a lower voltage by means of a transformer present inside the locomotive, converted from 1500 V or 750 V ac to dc by means of silicon rectifiers, and this power is then fed to the dc series motors inside the electric locomotives. This system has been adopted in India since 1957 and is based on the system adopted by French National Railways. 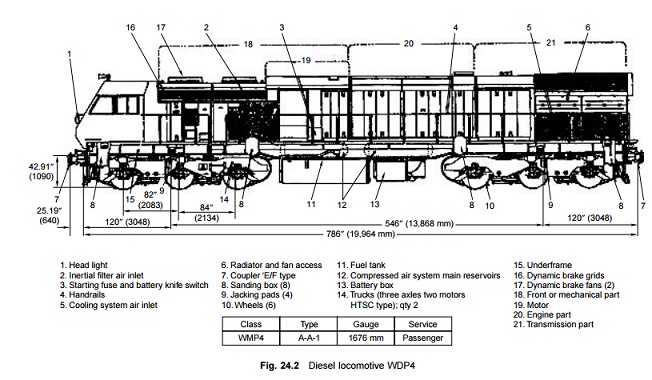 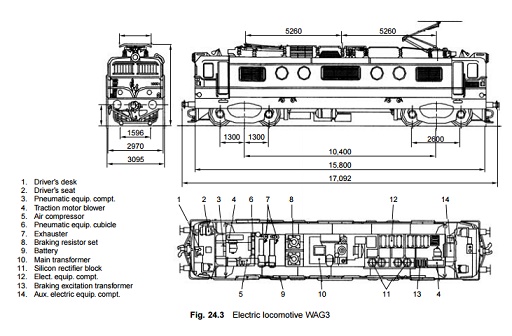 Earlier, Indian Railways had an electric traction system that worked using 1500-V dc and 3000-V ac. The electrification of a locomotive in India was first undertaken between 1925 and 1932 at 1500-V dc. This consisted of 304 route km on Central Railways from Bombay VT to Igatpuri and Pune, 62 km on Western Railways between Churchgate and Virar, and 32 km between Madras beach and Tambaram. These sections still use a 1500-V dc system to power their locomotives. In addition, 142 route km around Calcutta were electrified using a 3000-V dc system in 1954- 58, which has subsequently been converted into a 25-kV ac system.

The details of the four different types of electric locomotives in use on Indian Railways (IR) are given in Table 24.4.

The WAM1, WAG1, WAG3, and WAG4 locomotives are based on European design whereas the WAM4, WAP1, WCM1, and WAG5 locomotives have been designed in India with a six wheel arrangement for its bogies, which is similar to diesel WDM locomotives. Some of these locomotives are capable of hauling the latest type of BOX-N wagons with air brake arrangement.

It may be mentioned here that the WAP1 is a passenger locomotive that has a vacuum as well as an air brake system and is designed to run at speeds of up to 130 km/h. The Rajdhani Express on the Delhi-Howrah route is hauled by such locomotives. The horsepower, weight, and maximum service speed of different types of locomotives are given in Table 24.5.