2. Which of the following was an important centre for the learning in the ancient period?

d. All of these

3. Nalanda, the oldest university in India was located in

4. When did the UNESCO declare Takshashila as world heritage site?

5. Which European country were the first to start Modern System of Education in India?

6. Which of the following Charter Act made a provision for an annual grant one lakh Rupees for the promotion of Education in India?

7. Which of the following Commission recommended to constitute the University Grants Commission?

8. In which year the New Education Policy was introduced in India?

3. Iltutmish was the first ruler to establish a madrasa at Delhi.

5. SSA (Sarva Shiksha Abhiyan) is the primary vehicle for implementing the provisions of the Right to Education Actof (RTE) 2009.

6. Mid-day meal program was introduced in schools in 1956.

1. The writings of Charaka and Sushrutha were the sources of learning of medicine. [Answer: True]

2. Temples were the centers of learning and played an active role in the promotion of knowledge. [Answer: True]

3. The Jataka tales tell us that the kings and society took an active interest in promoting education. [Answer: True]

4. Women education in India was not prevalent during the medieval period. [Answer: False]

Correct statement: Women education in India was prevalent during the medieval period.

Correct statement: The RMSA scheme was implemented during Eleventh Five-Year

V  Consider the following statements and tick (✓) the appropriate answer

1. i) The Nalanda University was founded in fifth century C.E

iii) In ancient times the teacher was called Kanakkayar.

iv) The famous college during the Chola period was Kandhalur salai.

a) i and ii are correct

b) ii and iv are correct

c) iii and iv are correct

d) i, ii and iii are correct

2. Find out the Correct Pair

b. Macaulay’s Minutes of 1835 - English education

d. Salabhogam - Lands were given to temples

1. Write about the importance of Gurukulas.

(i) The main onjective of the Gurukulas was to have complete learning, leading a disciplined life and realising one’s inner potential.

(i) It strengthened the relationship between the Guru and the student.

2. Name the most notable universities that evolved in ancient India.

3. Write a short note on Taxila.

(i) Taxila was an ancient Indian city, which is now in north - western Pakistan.

(ii) It is an important archaeological site and the UNESCO declared it as a world heritage site in 1980.

(iii) Its fame rested on the university where Chanakya is said to have composed his Arthashastra.

6. What do you know about RTE?

Answer:  Right to Education (RTE) provides for free and compulsory education to all the children from the age of 6 to 14 years.

1. What were the sources of education in ancient India?

(i) The historical sources provide the information that from very early times, the tradition on teaching and learning had been in vogue in India.

(ii) The concept of Education might have originated from the Vedas.

(iii) The literal meaning the Sanskrit word ‘Veda’ is knowledge and the word derived from the word Vid, which means ‘to know’.

(i) In ancient India, both formal and informal education existed.

(ii) There were people in homes, villages and temples who guided young children in imbibing pious ways of life.

(iii) Teaching was oral and students remembered and meditated upon what was taught in the Gurukulas Guru / Acharya.

2. Write a paragraph about the education under the British rule.

History of education in British rule can be divided into four periods.

(i) From the early days of the British Rule:

(a) The Company’s charter was renewed in 1813, which compelled the company to assume responsibility for the education of Indian’s, though on a very limited scale.

(b) Missionaries, non-missionaries like Raja Ram Mohan Roy of Bengal Pachyappar of Madras, W. Frazer of Delhi contributed to the cause o education.

(a) The second period was also marked by great educational controversies concerning the issues of educational policy, medium of instruction and method of spreading education.

(b) These controversies were partially set at rest by Macaulay’s Minutes' of 1835.

(c) It also encouraging English education for the upper classes.

(a) The Third phase of British - influenced education may be called the period of an All India Educational Policy.

(b) It commenced with Sir Charles Wood’s Despatch in 1854.

(a) This period may be called provincial autonomy.

(b) The Act of 1935 ushered a new era of educational advancement through the country.

(c) After the Second World War, a very important plan for educational development, known as the Sergeant Report (1944) was prepared.

(i) The First National Educational Policy of 1968 marked a significant step in the history of education in post independent, India.

(ii) It aimed to promote national progress, culture and to strengthen national integration.

(iii) In 1986, the Government of India introduced a New Education Policy.

(iv) The aim of New Education Policy (NEP) was to transfer a static society into a vibrant one with a commitment to development and change. It emphasised on equal opportunities for marginalised sections of the country and the removal of disparity through scholarships, adult education and open universities, especially for rural India.

(vii) The New Education Policy was revised again in 1992.

(viii) It envisaged the formulation of National Curriculum Framework, emphasis on in-service education, improvement of facilities and streamlining of the evaluation system at the secondary stage.

(i) The Chola Period was the most brilliant and creative period in the Tamil Literature.

(iii) Free education was given to people.

(iv) The curriculum and syllabi had a theoretical background.

(v) From the inscription of that period, we can now gain knowledge about the qualification of teacher, method of teaching etc.

1. How does the flagship programme of SSA achieve Universal Elementary Education?

Answer: The Sarva Shiksha Abhiyan (SSA) is the Government of India’s flagship programme that was launched in 2000-01 to achieve Universal Elementary Education (UEE) . SSA is now the primary vehicle for implementing the provisions of the Right of Children to Free and Compulsory Education Act (2009) (RTE) . Right To Education (RTE) provides for free and compulsory education to all the children from the age of 6 to 14 years. The SSA initiates a variety of innovation and activities related to schools.

IX Mark the following places on the outline map of India 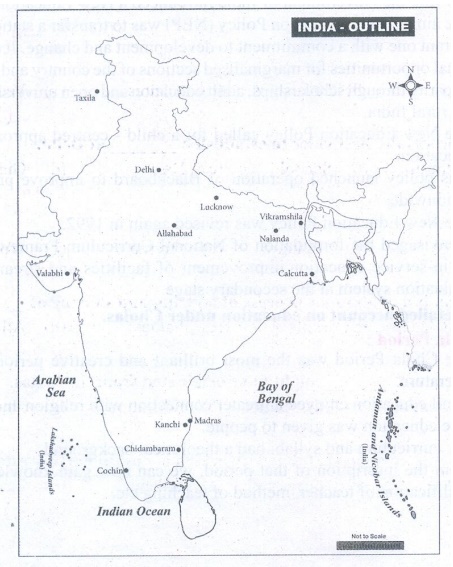 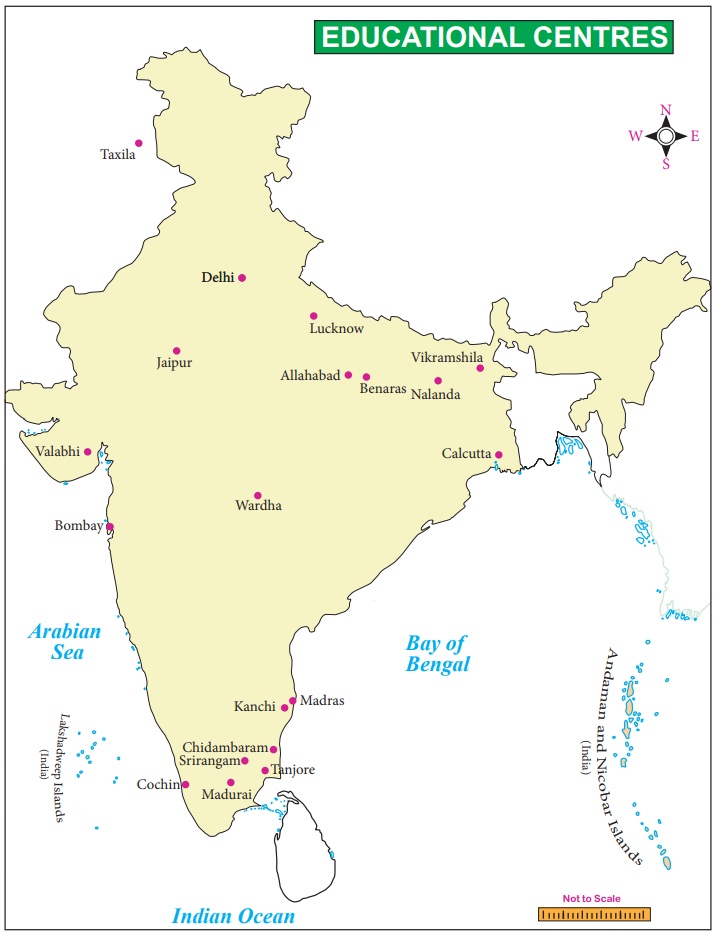 1. Collect the pictures of ancient educational centres and prepare an album.

2. Find out the historic importance of Nalanda, Taxila and prepare a power point presentation on it.