A Story of Self Sacrifice and Bravery

1. The terrorists asked Neerja to collect the passports of the passengers  because  they could identify the Americans on board.

2. Neerja passed on the warning in a code to the pilots  because  he wanted to alert them.

3. Neerja leapt into action when  she noticed there was chaos on board.

4. Neerja had a sour marriage due  to pressurizing dowry demands.

5. Neerja was sent to London based  on her performance and peer review.

B. Think and Write

Answer: The family of Neerja were discussing about the sensitive situation of an imaginary hijack. Then Neerja said these words, ’I will die, but not run away'. She was determined not to be a coward. She lived up to her word.

2. Why did the three governments of – India, America and Pakistan – honour Neerja?

Answer: India, America and Pakistan acknowledged her act of bravery. She had saved so many passengers, risking her life. So she was honoured by these governments.

3. How can we abolish terrorism?

Answer: We can abolish terrorism by the following ways :

(a) Stop supporting the Dictators who found terrorism.

C. Read the “Story of Self Sacrifice and Bravery” once again and complete the flow chart. 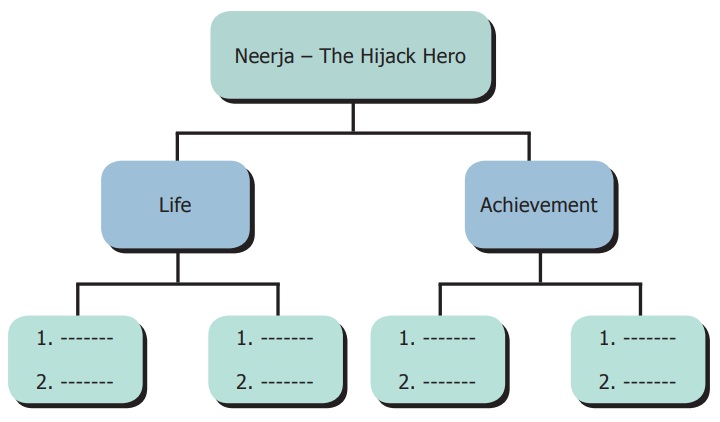 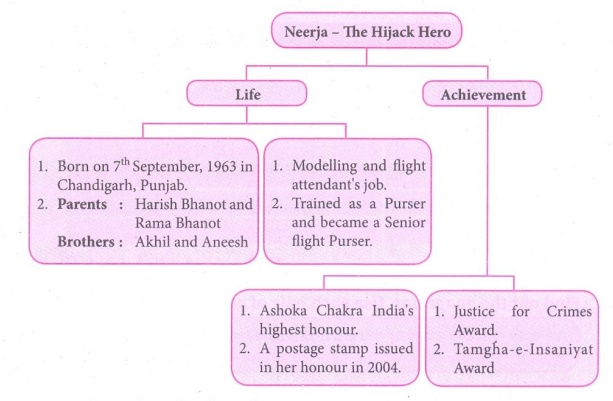 D. Write a summary based on the flow chart.

Answer: Neerja Bhanot was born on 7th September, 1963 in Chandigarh, Punjab, India. Her parents were Harish Bhanot and Rama Bhanot. Her father was a Mumbai based journalist. She had two brothers named Akhil and Aneesh. She started her career in modelling. She then applied for a flight attendant’s job with ‘Pan Am’. She sent to London to be trained as a Purser. Soon she became a senior flight purser. She was awarded the Ashoka Chakra award from the Indian government. A postage stamp was also issued in her honour in 2004. She was also awarded the Justice for Crimes was also issued the Tamgha-e-Insaniyat Award from American and Pakistan government.