Home | | English 7th Std | A Story of Self Sacrifice and Bravery: Section III

A Story of Self Sacrifice and Bravery: Section III

Read this section on your own and discuss in groups and answer the questions. Awards, Achievements and Legacy

Read this section on your own and discuss in groups and answer the questions.

“Her loyalties to the passengers of the aircraft in distress will forever be a lasting tribute to the fi nest qualities of the human spirit.”— Ashok Chakra citation

Neerja’s act of bravery was acknowledged and rewarded by the Indian, Pakistan and American governments. She was awarded the Ashok Chakra, India’s highest honour for bravery in peacetime and she became the youngest civilian to receive it. A postage stamp was also issued in her honour in 2004.

In 2005, her brother went to Washington DC to receive the ‘Justice for Crimes Award’ awarded posthumously to her as part of the ‘Annual Crime Rights Week’. She also received the Tamgha-e-Insaniyat award.

Her parents set up the Neerja Bhanot Pan Am Trust with insurance money and funds from Pan Am for using the brand Pan Am in the title. The trust presents two awards every year, one to honour a flight crew member, worldwide, who acts beyond the call of duty and another to an Indian woman who overcomes social injustice and helps other women in similar social distress. The award includes a sum of INR 1,50,000, a trophy and a citation.

One of the children who this brave flight purser saved during a hijacking incident in 1986 is now a captain of a major airline.

Some people shine even after death and she was among them. Even the streets of Mumbai couldn’t forget her. A square in Mumbai’s Ghatkopar (East) suburb was named after her by the Mumbai Municipal Corporation.

1. Why was  Neerja awarded the Ashok  Chakra?

Answer: Neerja was awarded the Ashok Chakra for bravery in peacetime.

2. How was Neerja honoured by various governments?

Answer: Neerja act of bravery was acknowledged and rewarded by the Indian, Pakistan and American governments. She was awarded the Ashoka Chakra. A postage stamp was also issued in her honour in 2004. She received 'Justice for Crimes Award' and 'Tamgha-e-Insaniyat Award'.

3. What are the selection criteria for the Neerja Bhanot Pan Am Award?

Answer: The trust presents two awards every year - one to honour a flight crew member. The other to an Indian Woman who overcomes social injustice.

civilian -  a person not in the armed services or police force

posthumously -  after the death of the person

crew  - a group of people who work on a ship, aircraft or train

The "black box" is made up of two separate pieces of equipment: the flight data recorder (FDR) and a cockpit voice recorder (CVR). They are compulsory on any commercial flight or corporate jet, and are usually kept in the tail of an aircraft, where they are more likely to survive a crash. FDRs record things like airspeed, altitude, vertical acceleration and fuel flow. Early versions used wire string to encode the data; these days they use solid-state memory boards. Solid-state recorders in large aircraft can track more than 700 parameters. 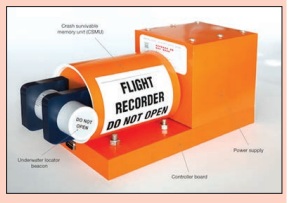 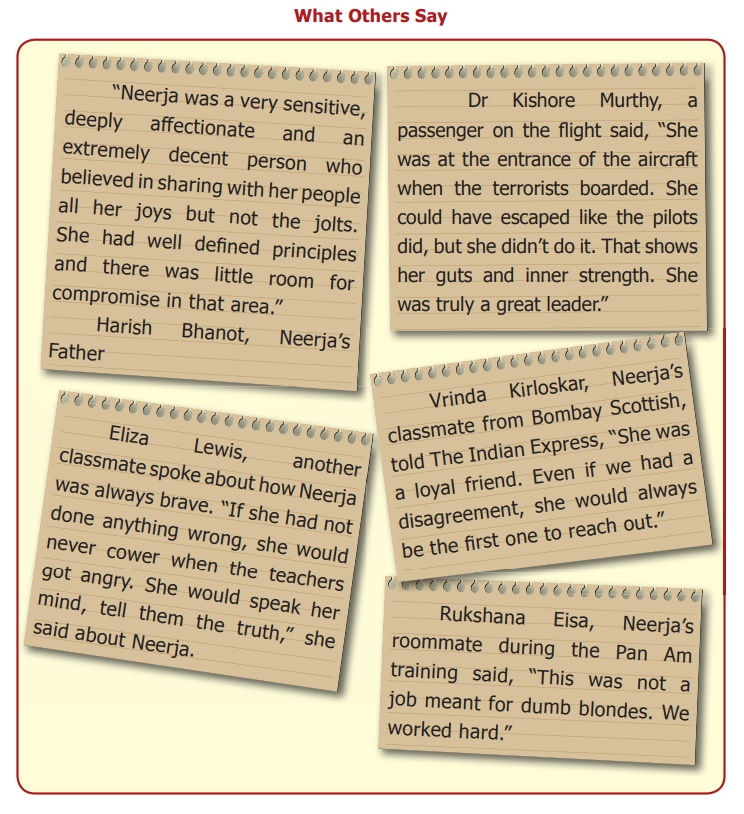 1. According to Neerja’s father, Neerja had well defi ned principles and there was little room for compromise in that area. Do you have any principles where you don’t want to compromise?

Answer: I have certain principles in my life. I am always committed to my duty. I do exactly what makes me love myself. I always move myself in the right direction. I will never compromise with anyone in these areas.

2. Virinda told the Indian Express that Neerja was a loyal friend. Are you always loyal to your friend?

Answer: Yes, I am always loyal to my best friends Latha and Revathi.

3. Neerja would speak her mind, tell them the truth, according to one of her classmate Eliza. Do you always have the courage to stand for truth?

Answer: Yes, I do have the courage to stand for truth. But on some occasions, I had to keep quiet for the benefit of my dear ones.