Home | | English 7th Std | A Story of Self Sacrifice and Bravery: Section II

A Story of Self Sacrifice and Bravery: Section II

Read this section with your partner and then discuss and answer the questions. Neerja Bhanhot – Life

Read this section with your partner and then discuss and answer the questions.

Neerja Bhanot was born on 7 September 1963, in Chandigarh, Punjab, India, to Rama Bhanot and Harish Bhanot, a Mumbai-based journalist. She was the couple’s third child, a much longed-for daughter after two sons, Akhil and Aneesh.

Neerja attended Chandigarh’s Sacred Heart School till she was in the 6th standard, after which her family moved to Mumbai. There she attended Bombay Scottish School and went on to graduate from St. Xavier’s College.

Even though Neerja’s career had taken off, her family decided to get her married to a man in Sharjah, UAE. By March 1985, Neerja was married. This is where her life took a turn for the worse. The marriage proved to be a disaster. After two months, she left her husband at the age of 22, due to pressurizing dowry demands. But this woman refused to surrender to the society because she was born with the spirit to fi ght. Despite a sour marriage, she started her career in modelling and made appearances in various advertisements like Binaca toothpaste etc. 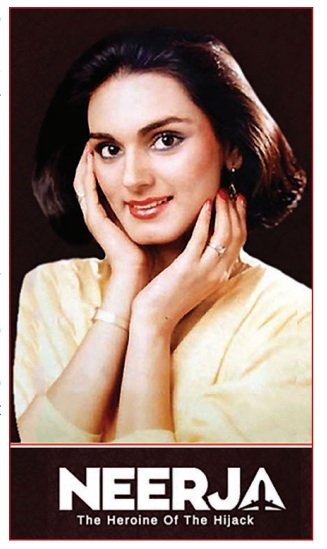 She then applied for a fl ight attendant’s job with Pan Am, the principal and largest international air carrier in the United States at that time. Only 80 of the 10,000 applicants were picked, and Neerja was one of them. She was sent to Miami to train for 6—8 weeks, and within a year, based on performance and peer review, she was sent to London to train to be a purser – the senior most cabin manager. Pursers worked as managers on fl ights, handling passenger complaints, making required announcements and handling security. She was soon made a senior fl ight purser with the airways — a big career achievement for a young woman of 22.

1. Name the schools and colleges Neerja studied in.

2. Why was Neerja sent to London?

Answer: Neerja was sent to London to train to be a Purser.

Answer: Pursers worked as managers on flights. They handled passenger, complaints and security. They also made required announcements.

Pressurizing - persuading or forcing someone into doing something

Performance -doing something to a specifi ed standard