Home | | English 7th Std | A Story of Self Sacrifice and Bravery: Section I

A Story of Self Sacrifice and Bravery: Section I

Listen to your teacher read this section. Discuss with your partner and answer the questions.

A Story of Self Sacrifice and Bravery

Listen to your teacher read this section. Discuss with your partner and answer the questions.

It was the morning of September 5, 1986. The aircraft, Pan Am Flight 73 with 360 passengers on board, had just arrived from Mumbai and was ready to depart from Jinnah International Airport in Karachi for its destination — the United States. Unfortunately, the flight was hijacked by four heavily armed terrorists while it was parked at Karachi airport.

The passengers on the plane hailed from different countries — there were Indians, Germans, Americans, and Pakistanis, among others. The terrorists were more intent on targeting the Americans. When Neerja was told to collect the passports of the passengers, Neerja managed to hide their passports and discard them down the rubbish chute. With her help at least 39 American passengers were saved out of 41. The hijackers wanted to fl y to Israel and crash the plane against a building. On being confronted with this unexpected calamity, Neerja immediately sprang into action. She attempted fi rst and foremost, to alert the pilots in the cockpit of the hijacked plane so that they could save themselves. When the terrorists saw that, they assaulted her. She then passed on the warning in a code, which alerted the pilots. As per the mandate, they made an escape through the alternate exit so that the terrorists were at a loss of pilots who could be forced to fl y the plane to the terrorists’ desired location.

“I will die, but not run away”— this is what a young Neerja told her mother when they had discussed the sensitive situation of a hypothetical hijack. Her brother Aneesh Bhanot recalls how one day her mother had picked this topic and told Neerja that she must save herself in case a hijack ever took place on a Pan Am fl ight — the airlines that Neerja was working for. To this, Neerja had asked her mother to never think this way again, for she was determined to not be a coward in such a situation; and she lived up to her word.

The nightmare on the aircraft continued for long. The frustration and helplessness of the terrorists grew every hour and their patience was running out. Seventeen hours into the hijack, the plane ran out of power. The terrorists lost their cool and opened fi re on the passengers. Armed with grenades, plastic explosive belts, and pistols, the terrorists raised hell on board. Taking advantage of the chaos and the terrorists’ senselessness, Neerja leapt into action at this point of time. She shed all her hesitation and fears and worked her way around evacuating as many passengers as she could. She could have run away for she knew the escape routes well, but she didn’t. She waited selfl essly in the face of death to help the ones around her. 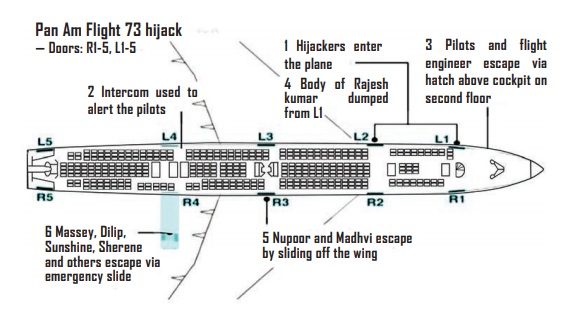 As she was about to exit herself, she noticed three children who were left in the flight. They needed her help in escaping. As the brave-heart rescued the kids, she was hit by the bullets fired by one of the terrorists. The wounds inflicted were fatal, and Neerja eventually succumbed to them. By a cruel twist of fate, this heroic young girl passed away.

1. How did Neerja save the Americans?

Answer: Neerja saved the Americans by hiding their passports and throwing them down the rubbish bins.

2. Why did Neerja alert the pilots?

Answer: Neerja alerted the pilots to escape through the alternate exits.

3. What happened when the terrorists lost their patience?

Answer: When the terrorists lost their patience, Neerja leapt into action. She shed all her hesitation and fears. She worked her way around helping to save as many passengers as she could.

infl icted - caused something unpleasant to be suffered by