Klein’s (Klein, 1937, 1946) theoretical formulations grew out of her observations of the psychotic children she treated.

Klein’s (Klein, 1937, 1946) theoretical formulations grew out of her observations of the psychotic children she treated. Although some of her controversial ideas have never gained acceptance in mainstream American psychoanalytic thought, her formulations about the importance of aggression and envy, particularly in more primitively organized patients, as well as her understanding of primitive defensive operations have been central in the think-ing of later object relations theorists.

Klein believed that fantasy exists from the beginning of life and is by definition the mental expression of the instincts. She conceptualized the neonate as having an active inner world of fantasy based on its innate libidinal and aggressive drives and their aims. The death instinct is central to Klein’s theories. It finds its expression in earliest infancy in aggression against the object and the self.

Klein modified Freud’s theories of psychological develop-ment drastically. As mentioned, she focused predominantly on infancy, describing two psychological “positions” during the first year of life (which was for Freud the oral stage of development). These are the paranoid–schizoid position (Table 18.8) during the first 6 months of life and the depressive position during the sec-ond 6 months. The paranoid–schizoid position is characterized by the defenses of projection, introjection, projective identification, splitting, idealization, omnipotence and denial (Klein, 1946). 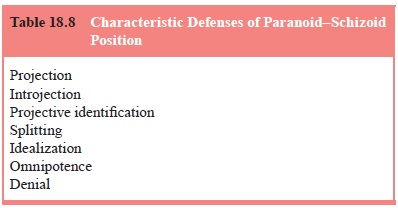 These defenses are termed primitive defenses because they have their origin in early development, in contrast to the higher-level defenses that evolve later. Projection is the defensive externalization of a threatening internal impulse, ideal, or feel-ing. Because this is the predominant defense of earliest infancy, the young infant believes that the dangerous impulse, idea, or feeling, which actually originated from within as a manifesta-tion of its own intense drives, is coming from an external source. Therefore, the feared threat is perceived as external rather than internal. This results in anxiety about being attacked from with-out, termed paranoid anxiety.

Introjection takes place when an external object is taken inside (in fantasy) and becomes part of the internal rather than the external world. The paranoid position is characterized by projection and introjection taking place in cycles.

Splitting is the intrapsychic separation of the object into different partial objects. Typically, an unrealistically all-good (idealized) object and an equally unrealistically all-bad object are constructed. In the course of normal development, in the presence of adequate parenting that provides the consistent availability of predominantly benign external objects, the cycle of projection and introjection gradually results in the introjection of more be-nign aspects of the external object (parent or other caretaker), and the bad internal object is gradually detoxified.