Erikson divided the entire life-cycle into eight stages, thus ex-tending into adulthood Freud’s notion of infantile psychosexual stages while at the same time broadening Anna Freud’s concept of the developmental lines of childhood.

Erikson divided the entire life-cycle into eight stages, thus ex-tending into adulthood Freud’s notion of infantile psychosexual stages while at the same time broadening Anna Freud’s concept of the developmental lines of childhood. As shown in Table 18.10, Erikson (1982) linked each psychosexual stage to a particular body zone or zones. In each stage, the individual negotiates a phase-specific psychosocial developmental task toward the achievement of specific strengths. In this model, each individual evolves a mode of interpersonal and intrapsychic functioning with emergent social capacities uniquely adapted to a particular social milieu. The crises of each stage are normative, not patho-logical ones, and the developmental tasks are never fully resolved in each stage but continue to be worked out throughout the life span.

Far from being a simple linear model, Erikson used his hierarchical schema to explore increasingly complex interac-tions between earlier and later stages over time and between in-ternal and external factors that influence development. Erikson integrated so many separate components of the individual’s de-velopment and provided tools for their investigation in research models.

Erikson’s work has had a lasting impact on our under-standing of adolescence and the concept of identity. Each of the developmental stages has a psychosocial crisis. For the adoles-cent it is an identity crisis. Whereas the term identity crisis has come into popular use to denote troubled teenagers with patho-logical antisocial behavior, Erikson’s original intention, as with 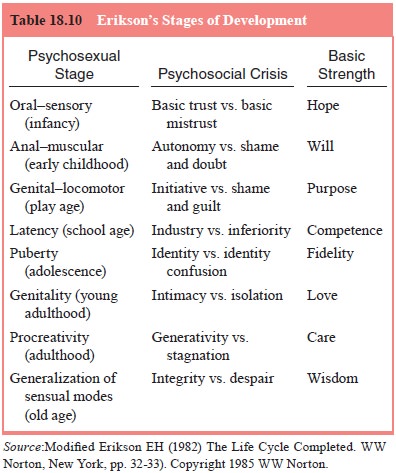 the crises of each of the other developmental stages, was to des-ignate a normative phase-specific internal conflict.

It is the concept of individual development within a so-cial matrix and the interaction between the two to which Erikson gave his stamp. He had a complex view of this interaction, de-scribing how at each stage of development the specific caretaker within the social matrix responds to the individual’s stage and needs in accordance with the caretaker’s own phase-specific ca-pacities and needs. Thus, the developing individual and his or her caretaker mutually influence each other in a manner specific to each dyad. The paradigm of this mutual interplay can be used to describe the interaction between parents and children, children and their teachers, psychotherapists and patients, societies and their members, or any one individual and another throughout the life-cycle.

Erikson concluded that every society responds to each de-velopmental phase with institutions specific to that culture and so determines for each individual growing up in that culture the manner and extent of resolution of every developmental phase. Through this process, a given community preserves its own ecological balance.